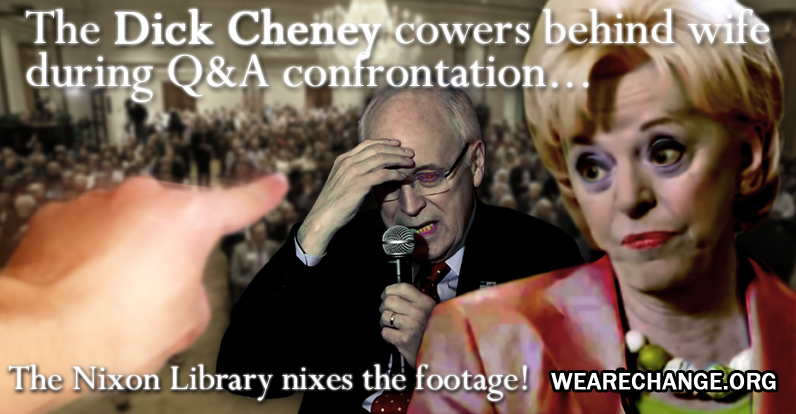 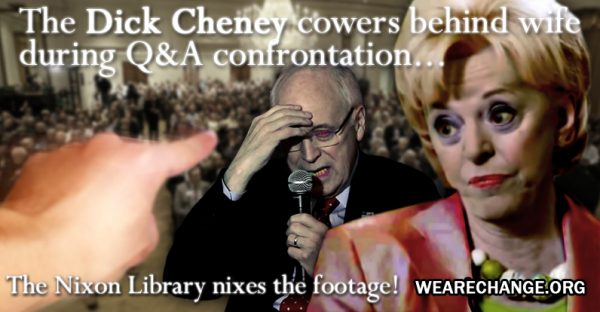 The perfect trifecta when confronting a known war criminal on his turf.

After crawling through traffic, I finally arrived at the Nixon Presidential Library. Historically notorious for omitting facts and attempting to whitewash the Watergate scandal, this mausoleum stood upon unholy ground.

I texted Cassandra and met her in the parking lot. She was pissed.

Wearing a semi-conservative dress and a sweater to cover up most of her tattoos, Cassandra certainly looked the part. But upon closer inspection, the rest of her visible tats (Guy Fawkes mask, drunken peace symbol, etc.) raised multiple red flags screaming: “Anarchist!”

Realizing we would most likely be corralled through a security checkpoint, Cassandra remembered the plethora of contraband within her purse opting to leave them in my car instead.

In order to cleanly bypass security, we agreed to show up in disguise for the signing of Lynne Cheney’s new book, James Madison: A Life Reconsidered. Former Vice President Dick Cheney would accompany his wife to assist in promoting both her book and his psychotic agenda. We were in attendance to ask a simple question.

Having gone undercover into the Conservative ranks before, I found myself swimming in disturbingly familiar waters. So long as you comb your hair, act overly polite, and make derogatory comments about Obama while wearing a Polo shirt and khakis, no one will question a white guy’s loyalty. My usual dress code of ripped jeans and bongwater-stained shirts wouldn’t cut it with this crowd of frothing sycophants.

Stepping inside, Cassandra picked up her ticket at will call as I bought one from the gift shop. A poster of Richard Nixon bowling was calling my name, but I refused to give them any more of my money. “Would you also like to purchase a copy of Mrs. Cheney’s book?” the clerk asked.

I should’ve bought the book, I later realized. It would’ve given me an opportunity to get close to them.

As I approached Cassandra, we were immediately herded toward the security checkpoint along with dozens of elderly couples. Security forced everyone to empty their bags and pockets while wanding us. Before sweeping the handheld metal detector over each senior citizen, security asked, “Do you have a pacemaker or any metal plates?”

Some of them answered, “Yes.” Completely bypassing security with a one-word response. If the elderly in this country ever went rogue, our initial defenses would be terrifyingly vulnerable!

Making it through security without incident, we found ourselves within the viper pit. The first 10 rows were cordoned off, so we grabbed the closest seats to the stage possible and began whispering strategies.

Should we just interrupt Cheney during the event? Will there be a Q & A? What if he doesn’t show up and it’s just Lynne? Dammit! We should’ve bought a book to get close to them.

Suddenly, an older woman in a pink sweater sat beside me. I immediately turned to Cassandra and whispered, “Code Pink?”

She shrugged, so I tested the waters.

Code Pink is an activist group consisting mostly of women who oppose war crimes and atrocities. They protested multiple times against CIA Director John Brennan for his complicity in the drone and torture programs. Last year, they protested and were ejected from his Senate hearing.

And they were rumored to appear tonight.

But this woman was no member of Code Pink. Her brother, Steve Tye, is running for California State Assembly. Because she believed I was a republican, she gave me his business card. As she handed me the card, I thought, An hour from now, you’re totally gonna regret giving this to me.

Witnessing a flock of high schools students being shepherded in, I immediately recognized the odious scent of indoctrination. You never forget that nauseating stench once you’ve been exposed to it. I almost felt sorry for them.

Dick and Lynne Cheney entered the suffocating room met with rounds of mindless applause. Because of their short stature, we couldn’t see them until they emerged onstage. The MC explained Mr. Cheney would be asking his wife questions regarding her new book then they would be taking questions from the audience.

We turned to each other like grinning idiots. Questions from the audience! That was our opening.

Dick sat down and asked his wife moronic quandaries off his index cards. Stifling yawns while dripping with sweat, I nearly lost control when Lynne mentioned President Madison had authored the 4th Amendment. She hailed Madison for this achievement even though her husband had successfully conspired to eviscerate the 4th and several other Amendments.

Dick Cheney, along with the rest of the Bush administration, authorized the use of illegal warrantless wiretapping, rendition, and torture. Yet his hypocritical wife had the audacity to lie directly to our faces. Unfortunately for the Cheneys, the Nixon Foundation was live streaming the event on YouTube.

As the Cheneys wrapped up their discussion, ushers prowled down the aisles picking people out of the audience and giving them questions to ask the Dick and Lynne Cheney. Cassandra began waving her hand vigorously. I turned on my camera.

After ignoring us for roughly 5 minutes, the usher finally picked Cassandra out of the crowd. He asked her, “What question do you have for Mr. and Mrs. Cheney?”

She lied, “What do you think is the most damage the Obama Administration has done to our Constitution?”

After receiving several softball questions, Dick and Lynne appeared ripe for the plucking. Cassandra took the mic and asked, “You had mentioned how important it was to Madison, the freedom of conscience. So I’m wondering how you feel about the fact that John Kiriakou, the whistleblower who exposed the torture program, is the only one currently sitting in prison for it?”

As the usher finally snatched the mic away from Cassandra, the world watched Dick Cheney squirming in his seat. Lynne deflected the question, instead focusing on Edward Snowden as cries of “Traitor!” erupted behind me. While Cassandra took her seat, I kept filming. Finishing her response, Lynne was not prepared for Cassandra’s next outburst, “Don’t you think that detaining 76 people who are cleared for release in Guantanamo Bay is betraying our country? Indefinite detention is a little worse? I think that Madison would be rolling over in his grave.”

When Lynne refused to answer the follow-up questions, Cassandra shot back: “I didn’t think you would.”

To our surprise, law enforcement didn’t toss us. Surrounded by old people, we were buffered by multiple layers of elderly human shields.

After the Q & A ended, everyone stood up as all eyes landed on us. While leaving the room, some of the high school students gave us signs of respect as a reporter from the OC Weekly chased after us. To my surprise, Cassandra Fairbanks revealed her full name while stating, “How is it fair that whistleblowers like Chelsea Manning are being locked up while Dick and Lynne Cheney trot around the country promoting their books? They should be called out everywhere they go.”

Four days after the event, the Richard Nixon Foundation removed the video from their YouTube channel. They replaced it with an edited version that no longer shows Dick Cheney squirming in his seat. Recently, they’ve uploaded a second version that no longer includes Cassandra’s questions. Comments have been disabled for both versions. Unfortunately for them, I caught the entire incident on video and Luke Rudkowski spliced it with the original footage. Apparently, freedom of speech still refuses to exist within the confines of the Nixon Library.