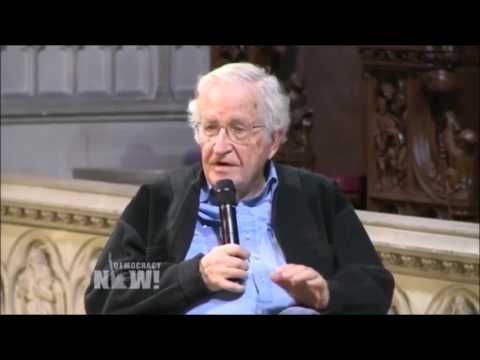 Historian, economist, philosopher and libertarian socialist Noam Chomsky has recently taken shots at the Trump administration, saying that they will cause another financial crash. Chomsky is also reportedly now throwing around the idea of a potential false-flag attack to boost support.

Chomsky claims that Trump will eliminate regulations on corporations, allowing more money to be made by CEOs, and less for workers. He asserts that this is going to help lead to another financial crash:

“Soon as Trump was elected, and since stock values and financial institutions escalated to the skies, they’re delighted. He’s going to eliminate regulations, let them make more profit. Of course, it will lead to another crash, but that’s somebody else’s problem. Taxpayers will take care of that.”

It seems that Chomsky also recently took shots at the departed Obama administration while paying respects to the movement of Bernie Sanders, saying:

“They [the working class] had a real need for hope and change. Well, they didn’t get hope, and they didn’t get change… Suppose that people like you, the people who formed the Sanders movement, would present an authentic, constructive program for real hope and change. It would win these people back… Many of the Trump voters could have voted for Sanders if there had been the right kind of activism and organization… It’s been done in the past under much harsher circumstances” (Watch below).

Chomsky seems to be skeptical that Trump is really an anti-establishment president. As reported in the Independent, Chomsky said that Trump’s cabinet, “is drawing from the billionaire class, largely financial institutions, and military and so on; in fact, take a look at the stock market, that tells you how anti-establishment he is.”

As Chomsky is saying here, it has been both historically and presently possible to conduct a political revolution through the ballot box. We all witnessed the election of seemingly anti-establishment Trump only months ago. Being an outsider to the political arena, it is no wonder that Trump has since compared himself to Andrew Jackson, who won the presidency in 1828 in a similar manner.

That’s not to say comparing yourself to Andrew Jackson is a great idea. He did put down an attempt at a centralized bank, but he also did many things that would make a common historian wonder why Trump even wants to affiliate himself with that name.

Trump had previously presented himself as someone who was outside of the political establishment, but his association with people from Goldman Sachs, who financed both Barack Obama and George Bush at convenient times, are evidence of the opposite. In fact, there are so many financial elites in Trump’s cabinet that it’s been since termed the “richest cabinet in U.S. history.”

As reported by Alternet, Chomsky has also thrown out some words of criticism for Trump’s cabinet, saying:

“The old Republican establishment is pretty much pushing through the kinds of programs that they have always wanted. And now they have a kind of open door that is Trump’s cabinet, which draws from the most reactionary parts of the establishment.”

Chomsky is also seemingly concerned about the future of the Trump administration, especially regarding his previous claims, that they might even consider taking advantage of a “staged or alleged” terrorist attack. As reported by Alternet, Chomsky said:

“I think that we shouldn’t put aside the possibility that there would be some kind of staged or alleged terrorist act, which can change the country instantly.”

Chomsky believes that this may occur in order for Trump to maintain his popularity, and/or to find a scapegoat to explain why his policies are failing.

This is all of course if they do fail. Only months into the Trump administration, it is fair that we let him put in his time, and see what he can do for America.