NYPD Officers Swing on 16-Year-Old With His Hands Raised, Then Hit Him in the Face With a Gun 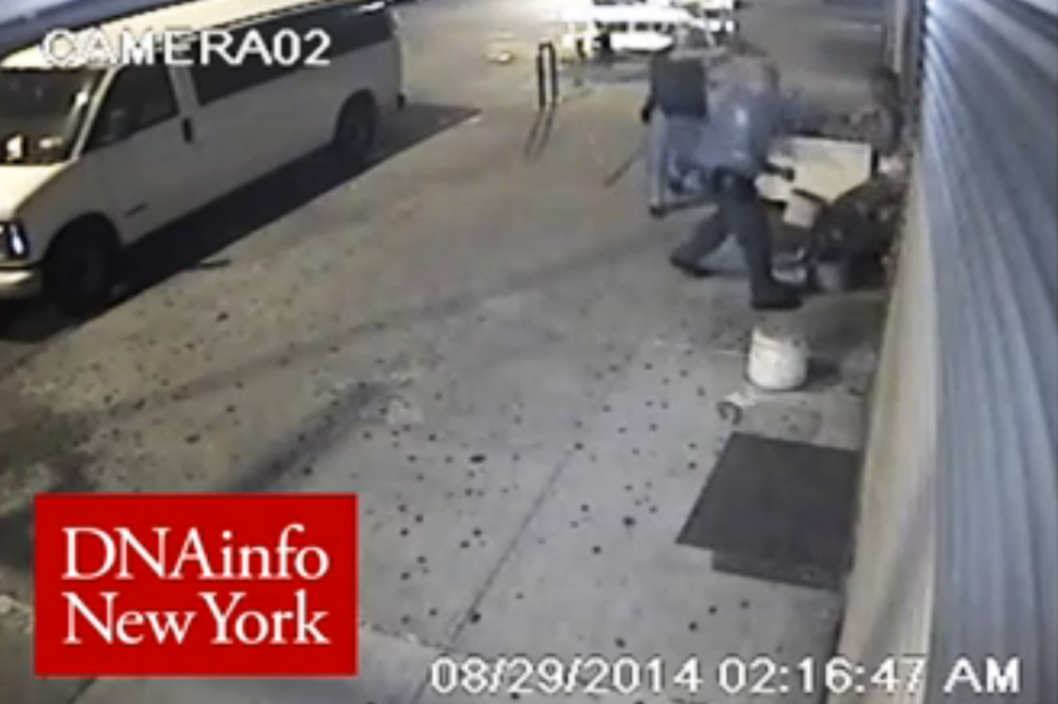 The latest video evidence of police brutality in New York City comes not via a bystander with a smartphone but from good old-fashioned surveillance footage. DNAinfo has the disturbing tapeshowing two officers catching up to 16-year-old Kahreem Tribble in Bed Stuy, just after 2 a.m. on August 29. The first cop takes a big swing at Tribble’s face and misses. As the teen backs into a security grate with his hands up, the second officer runs up, gun drawn, and smashes him in the teeth with the weapon. Once on the ground, Tribble gets hit again.

The officers have been identified as Tyrane Isaac (the punch) and David Afanador (the gun), and are now under criminal investigation by the NYPD Internal Affairs Bureau and Brooklyn D.A. Ken Thompson, DNAinfo reports. Isaac was stripped of his badge and gun, while Afanador has been suspended without pay. Both have been accused twice before of a false arrest or excessive force.

Tribble was charged with possession of 17 small baggies of marijuana in a small black bag — Afanador hits him in the face with it at the end — along with disorderly conduct. He showed up to court with cracked teeth. “As usual, the video fails to capture the offense that resulted in police action or the lengthy foot pursuit that culminated in the arrest,” said the police union rep charged with defending these guys in the press. “Situations like this one happen in real time under great stress. It’s very easy to be judgmental in the comfort of an office while sitting in front of a video screen.”

But in the wake of Eric Garner’s chokehold death — not to mention recent videos of officers roughing up street vendors and pregnant women, and subsequent investigations — NYPD Commissioner Bill Bratton has spoken strongly about throwing out bad apples. “We will aggressively seek to get those out of department who should not be here,” he said last week. “The brutal, the corrupt, the racist, the incompetent.” Here’s two of them.