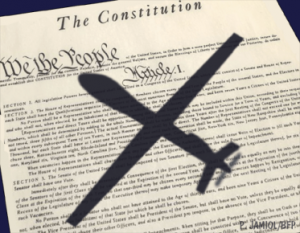 On the morning of February 10th, it came to light that the US government—specifically the Pentagon and CIA—have been considering whether or not to assassinate an American citizen via drone missile. This situation marks the first time that the Obama administration has admitted to targeting Americans for assassination, as well as the first time that the media has been given notification of a potential assassination before it actually occurs (if it occurs).

Three Americans (Samir Khan, Anwar al-Awlaki and Abdulrahman al-Awlaki) have already been killed in past drone strikes, but the Obama administration has refused to confirm that they were the targets—they have ostensibly (if ridiculously) left open the possibility that these Americans were killed by accident during assassinations of people near them. In these previous situation, this deniability has shielded the Obama administration from having to explain its legal justifications for claiming the authority to extra-judicially kill Americans abroad.

Put simply, the result of this potential assassination is a test of the Constitution’s protections in the modern era, where the government has the capacity to spy and kill from thousands of miles away. If the Obama administration decides to extra-judicially assassinate this American and is not held to account, it will set a terrible precedent that any American abroad could have his Constitutional rights violated in the most permanent and extreme manner.

If the government can extra-legally execute an American based upon assertions of terrorism that are never brought before a court or confirmed with evidence, then the sections of the 5th and 14th Amendments that involve due process aren’t worth the paper that they are printed on.

The currently-unnamed target of the Obama administration is accused of terrorism and is hiding in a currently-unspecified country which refuses to support American military operations. Leaks from two unnamed officials in the Obama administration to the Associated Press describe him as “an al-Qaida facilitator who has been directly responsible for deadly attacks against U.S. citizens overseas and who continues to plan attacks against them that would use improvised explosive devices.”

Despite their assertions, these officials have not produced any corroborating evidence, nor have they attempted to convene a grand jury in order to obtain an arrest warrant. Currently, the Justice Department is attempting to build a case against the target, but this attempt has not reached a point where it could support an indictment.

In parallel with the Justice Department’s attempts to build a case against the target, the CIA and Pentagon have been discussing the logistics of simply assassinating the target without any judicial approval or trial. Currently, a drone is following the target and can deliver a missile in second if the Obama administration gives the order to fire, regardless of the status of the State Department investigation.

For several years, the Obama administration has appeared to support the idea that they can legally assassinate American citizens abroad if they are suspected of terrorism. The legal justifications surrounding this assertion are still classified, but statements by Eric Holder tend to suggest that they involve a perversion of the definition of due process.

Here is one such quote:

“Some have argued that the President is required to get permission from a federal court before taking action against a United States citizen who is a senior operational leader of al Qaeda or associated forces. This is simply not accurate. “Due process” and “judicial process” are not one and the same, particularly when it comes to national security.

Put simply, this parsing of due process is absurd. The idea the extra-judicial killings—authorized in secret proceedings with secret memberships of unelected bureaucrats—could fulfil due process is an unbelievable assertion that hasn’t been litigated for the simple reason that no executive (not even Nixon) has ever had the gall to make this argument in court.

The CIA and military are in agreement that the target should be assassinated, but they disagree on who should be the assassin. According to a 2013 executive order by the Obama administration, the military has the responsibility to carry out drone assassinations abroad, not the CIA, but military has rules which restrict their actions in non-war zones.

In effect, this target for assassination is alive because he slipped into a legal no-man’s land, where neither the CIA nor the military are sure that they can legally act.

In the abstract, this is a case where the government is asserting the power to kill an American citizen who has never been indicted, tried or convicted of a crime, based upon secret evidence that exists only in internal executive branch memos. In fact, the administration itself admits that the evidence against the target isn’t strong enough to sustain an indictment in any normal court.

Beyond the fact that such a situation is rife for abuse by the executive (ex. falsely calling somebody a terrorist in order to justify an assassination), it is clearly a violation of the United States Constitution that cannot be excused.

The Obama administration would have us believe that they are simply acting to protect the United States from terrorism and that this killing is justified by the severity of the crimes of the accused—this view of the law simply wrong.

Even if we assume that the Obama administration’s assertions about the unnamed target are entirely correct and that he is a dangerous terrorist, the fact remains that he is an American who is afforded Constitutional protections that are not nullified once he is accused of a crime. Killing this man without regard to his rights creates an incredibly dangerous slippery slope that is a far greater threat than a single terrorist.

It is true that an American who is engaged in active violent conflict against the USA (ex. shooting a gun on a battlefield) can be killed in battle without violating the Constitution. That said, it is not legal for the US military or intelligence agencies to track down an American outside of a warzone and kill him via surprise missile attack—such a killing would be an extra-legal execution or assassination.

The rules of due process—as set up in the 5th and 14th Amendments—bar the government from executing Americans without first giving them the ability to defend themselves at trial, confront their accusers/evidence against them, and have their case heard by an impartial jury.

“No person shall be… [nor] be deprived of life, liberty, or property, without due process of law;

“No State shall… deprive any person of life, liberty, or property, without due process of law.”

Regardless of what Attorney General Holder asserts, due process IS judicial process and the executive branch cannot fulfill the requirements of due process by having an internal meeting where they decide to approve the killing.

If we allow the Obama administration to kill this man, it will set the precedent that he, or any future president, will have the legal authority to execute Americans who are accused of terrorism, without any process; no evidence will be required and no judicial oversight will be ensured. In fact, the secrecy of these operations will ensure that the targets never know why they were killed and will rob their families of any legal recourse.

What Must be Done

The revelation that the Obama administration is actually considering the extra-judicial assassination of an American proves that more accountability is needed. The law must be explicitly changed in order to ensure that the power to order such targeted killings is no longer centralized in the executive branch.

While standing will likely be difficult to prove, Americans must attempt to bring court cases against the Obama administration on this issue. Such cases are vital, as they have the potential to formally adjudicate the powers of the executive to deprive people of their lives and to ensure that the definition of due process is not perverted.

If Obama orders this assassination, it would almost certainly constitute an impeachable offense; abusing ones’ authority by illegally ordering an extra-judicial execution of an American in an extremely severe offense that makes Nixon’s abuses seem tame by comparison. While I personally would hate to see the federal legislature dragged through impeachment proceedings—it would be a perfect chance for the GOP in the legislature to bloviate and demonize before the 2014 election—this is an issue that goes beyond partisanship.

Protecting the Constitution (and the rights it guarantees) is far more important than partisan tribalism and everybody must get in front of this issue before it becomes too late to stop.