Obama and Hillary For Prison Float Sparks Controversy In Texas 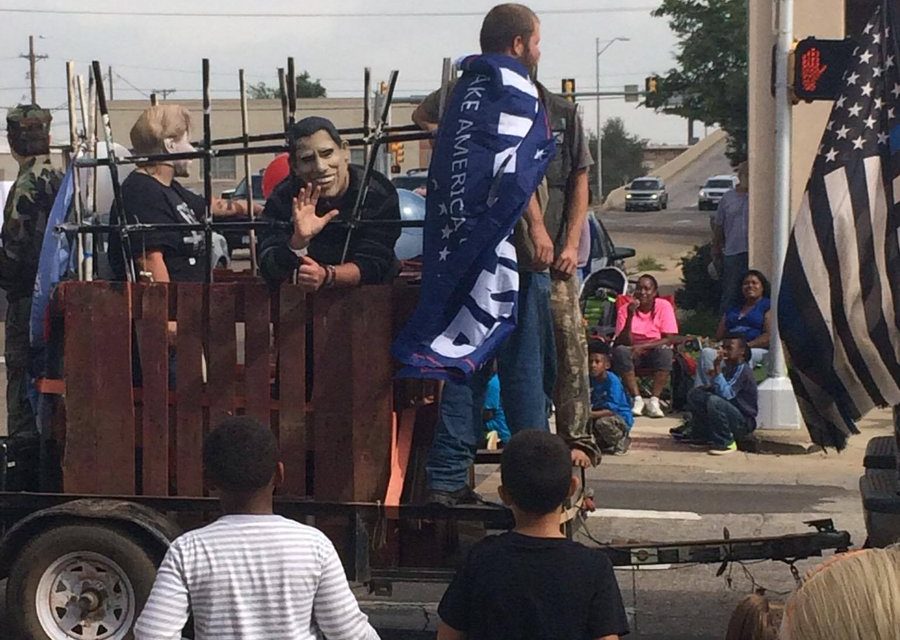 A float at the annual Tri-State Parade in Amarillo, Texas has sparked controversy, with an image that is quickly going viral through social media.

The float shows both President Obama and Democratic presidential candidate Hillary Clinton in a cage. The float was organized by a group called Stars and Bars that rode alongside the Confederate Riders of America. 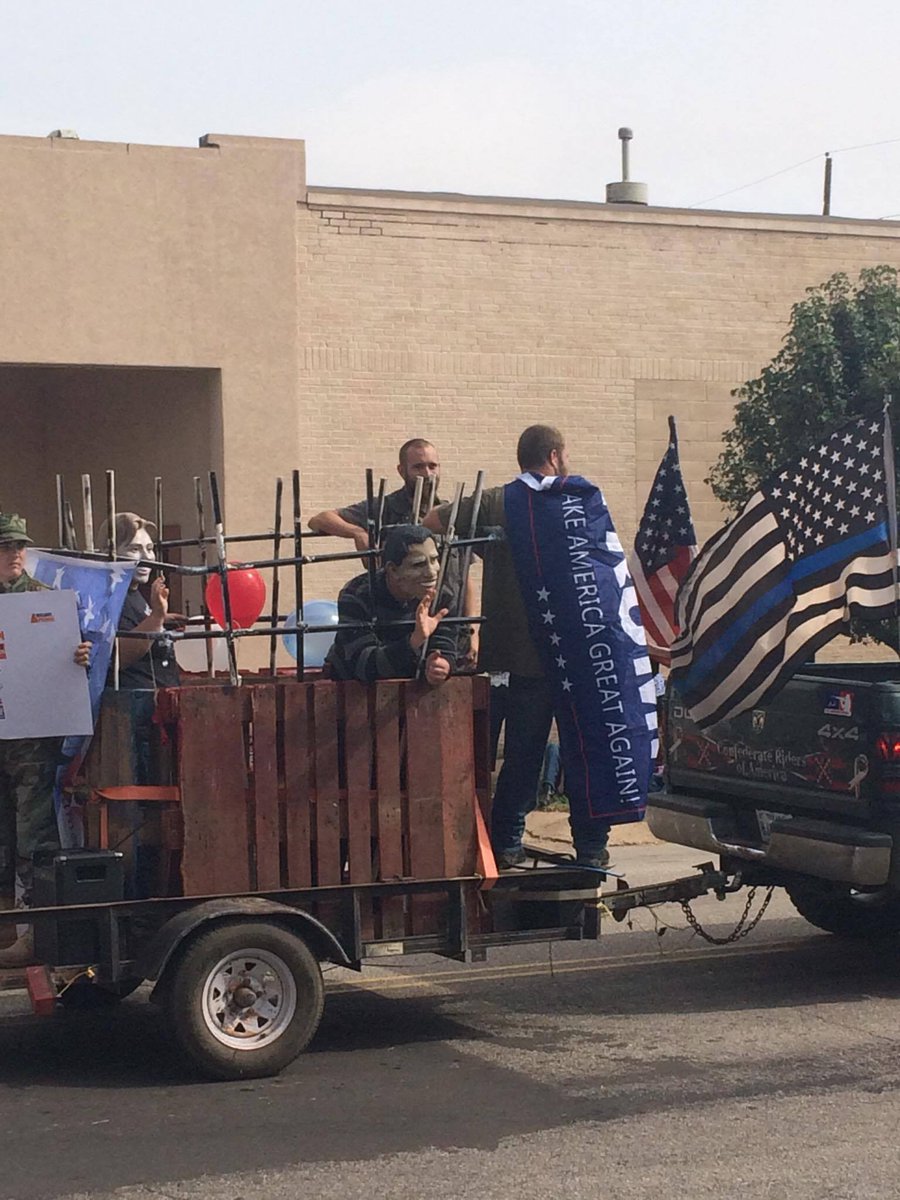 The float was made of planks of wood and metal and accompanied by a “Make America Great Again” banner that a person on the back of the float held up supporting Republican Presidential nominee Donald Trump.

A picture of the float was submitted to Texas local News Channel 10. In the photo, a man is wearing a President Obama mask waving to the crowd, accompanied by a someone in a Hillary Clinton mask. Both were standing behind bars, insinuating that both Hillary Clinton and Barack Obama should be in prison.

Not everyone agreed with the political message. One local resident, Rodney Darnes, expressed his disagreement by calling the float racist and sexist.

“A lot of people in the black and Hispanic community are saying, why would you put a black man in a cage? The fact that Hillary is in the float only sets the women’s movement further back.” – said Rodney Darnes.

The President of the Confederate Riders Of America responded to the backlash from the float by saying the float’s intentions were not racist, but to send a political message.

“It was in no way racist, there was a sign right next to them that said ‘Hillary for Prison 2016.’ We had no racial intentions at all,” said Michael Bateman, the President of the Confederate Riders of America.

A poll posted on the KXXV Channel 10 news website shows about 60 percent of those who voted did not find the float offensive compared to 40% who found the float sexist or racist.

Do you find this float from the Tri-State Fair offensive?

We'll have the results tonight on @NewsChannel10 pic.twitter.com/EVAOiq5WC3

It is astounding that 40% of viewers could find such a simple message racist or sexist. The float has everything to do with Hillary Clinton and Barack Obama committing various crimes and human rights violations and being held accountable for them to the fullest extent of the law – just like any other citizen. If you break the law, behind bars is where you belong. A few users on Twitter agreed, recognizing the float is basic First Amendment freedom of speech, adding that both Hillary Clinton and Barack Obama should be in jail and that they were proud of the float.

“How exactly is this float offensive? That’s an example of the minimum they both deserve! Proud of that float!” Wesley Winters, wrote on Twitter.

“No, it’s not racist. Freedom of speech. Barack Obama should go to jail and so should Hillary. They are both crooks,” wrote Jonathan Mullins.

Some websites deceptively tried to edit out Hillary Clinton’s presence on the float, showing only Barack Obama behind bars, turning it into a race argument and not one about criminal actions. 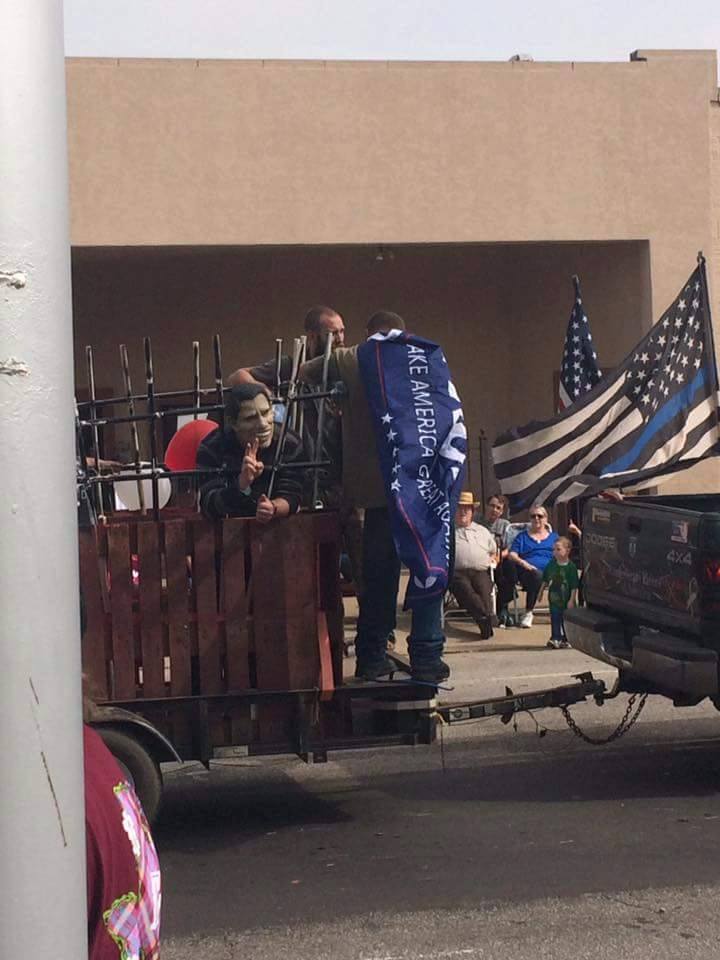