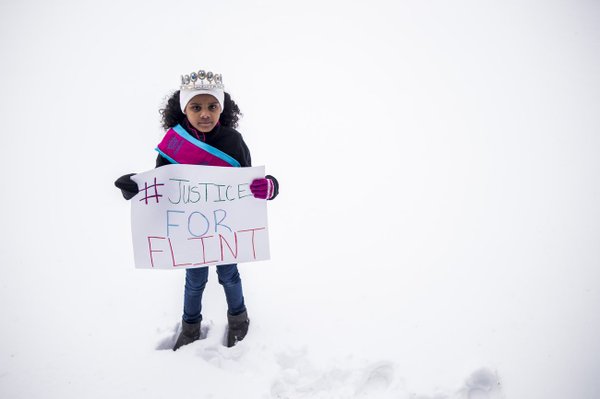 In what some — including filmmaker, activist and Flint resident Michael Moore — are calling too little, too late, President Barack Obama is finally planning a visit to Flint, Michigan, next week.

The White House announced the President’s trip plans on Wednesday, explaining that he is finally going to visit after receiving a letter from an 8-year-old girl who wrote to him about the water crisis.

The letter from the concerned child read as follows:

Hello my name is Mari Copeny and I’m 8 years old, I live in Flint, Michigan and I’m more commonly known around town as “Little Miss Flint”. I am one of the children that is effected by this water, and I’ve been doing my best to march in protest and to speak out for all the kids that live here in Flint. This Thursday I will be riding a bus to Washington, D.C. to watch the congressional hearings of our Governor Rick Snyder. I know this is probably an odd request but I would love for a chance to meet you or your wife. My mom said chances are you will be too busy with more important things, but there is a lot of people coming on these buses and even just a meeting from you or your wife would really lift people’s spirits. Thank you for all that do for our country. I look forward to being able to come to Washington and to be able to see Gov. Snyder in person and to be able to be in the city where you live.

8-year-old Mari Copeny stands in protest asking "Justice for Flint" before a rally at @UMFlint before #DemDebate. pic.twitter.com/GW2tzkVqAb

In President Obama’s response to Copeny, he wrote:

“You’re right that Presidents are often busy, but the truth is, in America, there is no more important title than citizen. And I am so proud of you for using your voice to speak out on behalf of the children of Flint.”

In the White House statement, they explained that the President will meet with residents and give a briefing regarding what the federal government plans to do about the crisis.

“The President will travel to Flint, Michigan where he will hear first-hand from Flint residents like Mari about the public health crisis, receive an in-person briefing on the federal efforts in place to help respond to the needs of the people of Flint, and speak directly with members of the Flint community,” the White House said in a statement.

Activist, filmmaker, and Flint resident Michael Moore was not impressed by the announcement, however, and wrote a lengthy, and angry, response blasting the President. He asserted that “every child here now has some form of permanent brain damage. There is NOTHING you can do to reverse that for them. There is no cure,” before demanding that the city does not need any more visits from politicians.

“We don’t need any more visits from politicians, even one as beloved as you. We don’t need any more promises of testing. We don’t need any more token digging up of pipes made rancid by the Flint River water that flowed through them (of the 75,000 pipes that need replacing, a total of 39 – 39!! – have been dug up and removed since you met with the mayor in the White House back in January). Meanwhile the poisoning continues on daily basis, even with the Lake Huron water that has been restored because it’s flowing through lead-damaged pipes with a new chemical that now burns people’s skin,” Moore wrote in a lengthy open letter to the President that he posted on Facebook.

Moore then promised that riots will surely begin soon.

“So unless you’re bringing the U.S. Army with you to save 100,000 of your fellow Americans, and unless you’re going to arrest the governor of Michigan who has now killed more Americans than ISIS, you might as well stay home. The riots here, I’m certain, will begin sometime soon. That’s what you or I would do if someone was poisoning OUR kids and the government refused to stop it, right?” Moore asked.

So far, three officials have been charged with misdemeanors and felonies for their involvement in the water crisis which poisoned the city. Calls for Governor Rick Snyder to be removed from office and arrested have so far gone ignored.

The contamination of Flint’s water began in April 2014, when the city stopped receiving its supply from Detroit, and began using water taken directly from the Flint River — a source known to have a high corrosive salt content. Corrosive salts in the water damaged the pipes, which contain lead, causing that harmful material to be released into the water.

In October, the state changed the city’s drinking water source back from the polluted Flint River to the Detroit water system, but many have expressed outrage that residents were not warned, and that it took so long to change back.

For a period of at least six months, the EPA and Michigan officials were aware of the poisoning of the water, but did not publicize their concerns or make an effort to correct the problem.