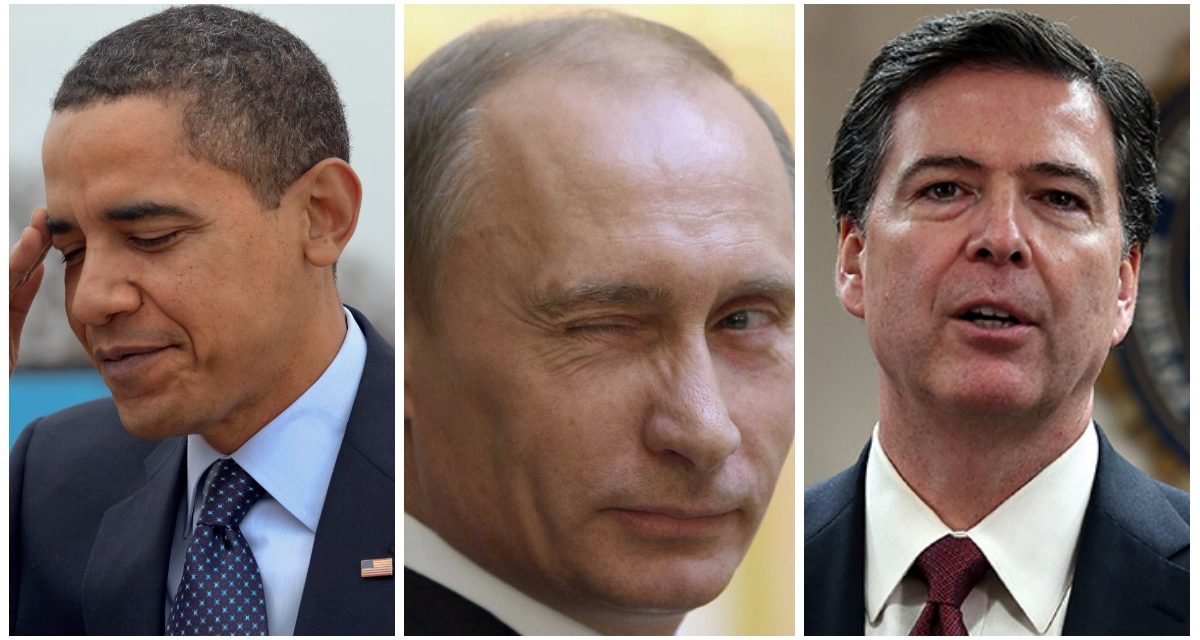 The narrative of the “Russian hacking” of the US elections has been thrown for a loop following a report the Obama administration blocked FBI Director James Comey’s attempts to go public as early as the summer of 2016 with information on Russia’s alleged campaign to influence the U.S. presidential election, Newsweek reports citing two unidentified sources with knowledge of the matter.

According to Newsweek, Comey pitched the idea of writing an op-ed about a Russian “interference” campaign during a meeting in the White House’s situation room in June or July 2016, well before the Department of Homeland Security and the Office of the Director of National Intelligence accused the Russian government of tampering with the U.S. election in an October 7 statement, the same day as Wikileaks started released the hacked Podesta emails, and the same day that the Trump’s “grab her by the pussy” recording emerged.

“He had a draft of it or an outline. He held up a piece of paper in a meeting and said, ‘I want to go forward, what do people think of this?’” said a Newsweek source with knowledge of the meeting, which included Secretary of State John Kerry, Attorney General Loretta Lynch, the Department of Homeland Security’s director and the national security adviser.

However, the ohe other national security leaders didn’t like the idea, and White House officials thought the announcement should be a coordinated message backed by multiple agencies. “An op-ed doesn’t have the same stature, it comes from one person.”

Newsweek notes that the op-ed would not have mentioned whether the FBI was investigating Donald Trump’s campaign workers or others close to him for links to the Russians’ interference in the election, perhaps because such an investigation did not start until later.

Comey would likely have tried to publish the op-ed in The New York Times, and it would have included much of the same information as the bombshell declassified intelligence report released January 6, which said Russian President Vladimir Putin tried to influence the presidential election, the source said.

What to make of this latest revelation: according to Newsweek, “for supporters of Hillary Clinton, news of the op-ed adds to the frustration over Comey’s public disclosure of details about the investigation into her emails, including at a July press conference, but not about the probe involving Russia and Trump, which began that same month.”

Of course, it remains unclear how and if the election outcome would have changed had Comey published the report: recent reports have suggested that despite allegations of collusion between the Trump campaign and Russia, nothing has been found. In other words, the best that Comey could reveal is that someone may have been trying to hack the DNC, and eventually, John Podesta. And yet, those hacks did nothing to change the actual voting process, they merely shed light on the illicit dealings within the Clinton campaign and the infighting within the DNC, which – as we now know – colluded both internally, with the press and with the Clinton campaign to prevent Bernie Sanders from becoming the Democratic presidential candidate.

In any event, the ball will now be in the Democrats’ court, with fingers pointing right at the White House.

“This raises a lot of questions,” says Jarad Geldner, a senior adviser for the Democratic Coalition Against Trump, which filed a complaint with the Department of Justice’s Office of Professional Responsibility over Comey’s disclosures about the Clinton investigation. “That raises the question of why Comey or [the Department of Justice] or the White House felt that it was OK to hold that [July] press conference on Hillary Clinton’s emails but not to go public with this.”

That would be the Obama White House, for those who have lost track of the timeline.

Worse, as Newsweek adds, it was a sluggish White House that denied Comey and delayed the announcement. “The White House shut it down,” that source says. “They did their usual—nothing.”

Of course, the biggest question raised is why did Obama block Comey in the first place. Or rather, make that rhetorical question.

While we doubt that Obama will suffer the Democrats’ wrath as a result of this latest story, it will be sure to keep the “Russian hacking” narrative topical for at least a few more days, before yet another “Russia story” emerges, and then another, and so on, until hopefully one day the bipartisan Senate probe into alleged Russian meddling “gets to the bottom of this.”