Officer’s act of kindness helps shoplifter out of difficult situation 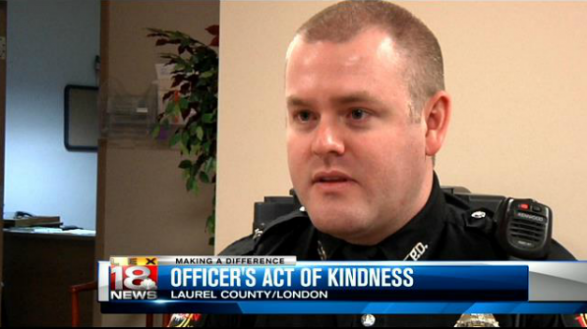 It started with a complaint about a shoplifter, but it ended with an act of kindness.

A London police officer took it upon himself to help a suspected shoplifter after realizing the man was in a difficult situation.

“As a police officer, it’s not black and white for us,” said Officer Justin Roby. “There’s a lot of gray. And you have to cipher through everything and you really need to figure out the whole story.”

Roby was called to the Kroger on North Main Street in London on Saturday, Jan. 17 after a loss prevention officer stopped a man who was shoplifting.

The suspect was a single father who had fallen on hard times, Roby said. The man was caught stealing baby formula for his six-month-old son, who was with him at the time.

The store’s loss prevention officer told Roby he did not want to press charges, and Roby agreed.

“Me citing him for court wouldn’t have done any good for him,” he said. “He’s already short on money, can’t afford formula, so me making him appear in court, he’s still not going to have any food for that baby.”