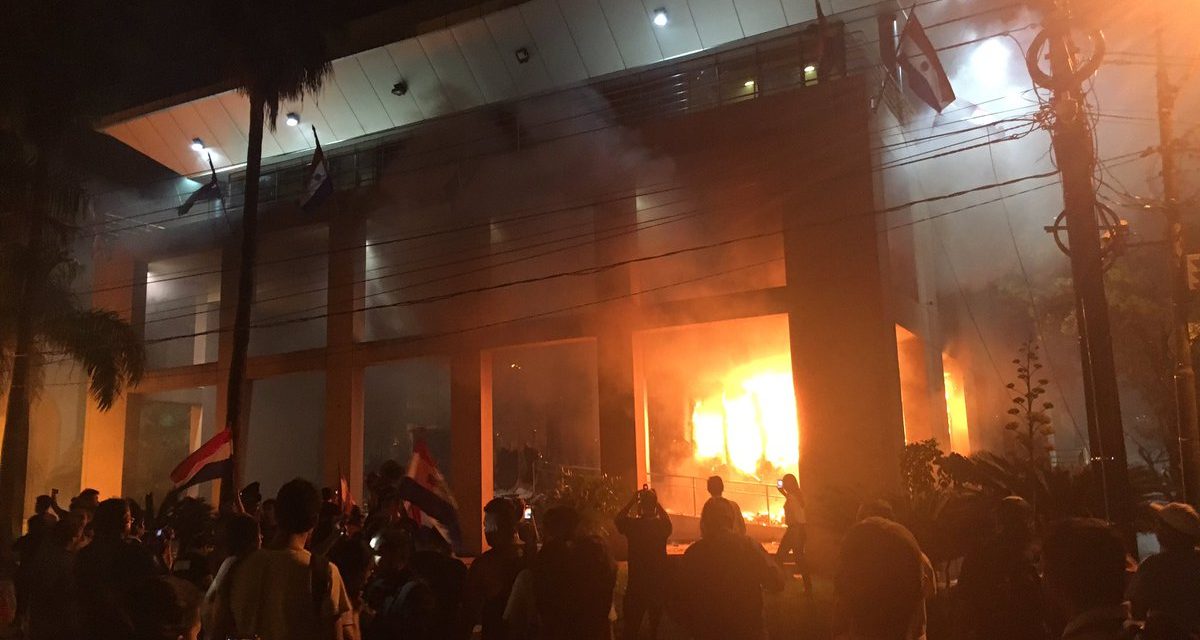 Protesters stormed and set fire to Paraguay’s Congress building on Friday after the Senate secretly voted for a constitutional amendment that would allow President Horacio Cartes to run for re-election.

Protests erupted outside the Congress after a group 25 lawmakers voted for the measure to secretly re-elect President Cartes, two more than the 23 required for passage in the 45-member upper chamber, Reuters reported.

Police in riot gear responded by lobbing tear gas and firing rubber bullets into the crowd.

A senator of the opposition party called for resistance stating that a “coup has been carried out” urging people to resist with them.

“A coup has been carried out. We will resist, and we invite the people to resist with us,” Senator Desiree Masi from the opposition Progressive Democratic Party said.

fire in ground floor of congress, no sign of firefighters. #Paraguay pic.twitter.com/vkyjg5ASwB

At least 30 protesters, police officers, and civilians were injured, but the actual number of casualties is unknown, the fire service and police said.

Protesters “ransacked” the offices of those who backed the bill Reuters reported.

Firefighters managed to control the flames after protesters left the Congress building late on Friday night. But protests and riots continued in other parts of Asuncion and elsewhere in the country well into the night, media reported.

Local media reported that several politicians and journalists were among the people injured in the clashes outside. Those wounded included Senate Speaker Roberto Acevedon, the former Minister of the Interior, Rafael Filizzola, of the opposition Popular Democratic Party, and the presidential candidate from Authentic Radical Liberal Party, Efraín Alegre the agency said citing Senator Luis Wagner.

The national police were not under any instruction to repress. They were attacked,” Interior Minister Tadeo Rojas said.

Paraguay’s constitution, adopted in 1992, only allows for the country’s presidents to serve a single term in office to prevent the country from returning to a dictatorship. Where Alfredo Stroessner ruled for more than 30 years after leading an army coup in 1954.

The approved amendment would allow Paraguay’s current president, Horacio Cartes to run for re-election in 2018.

But Before the amendment is law, it must be approved by the Chamber of Deputies.

Approval there would require the electoral court to call a referendum on the reform within three months.

Those in opposition to the re-election amendment have promised to resist the bill calling the change to the country’s constitution a “coup d’etat” and the start of a new“dictatorship.”

Video showed thousands of demonstrators outside the congressional offices rallying and chanting.

In a statement released on Twitter, President Cartes called for calm.

“Democracy is not conquered or defended with violence and you can be sure this government will continue to put its best effort into maintaining order in the republic,”