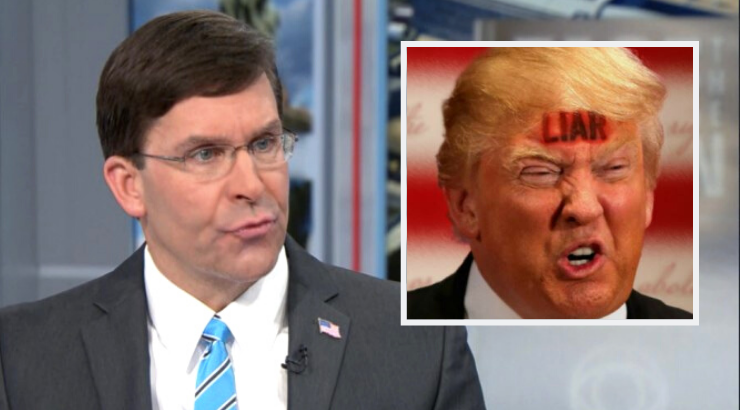 As a televised interview with Defense Secretary Mark Esper raised fresh doubts about President Donald Trump’s claim that Iran was planning to attack four U.S. embassies, polling released Sunday showed the majority of American adults don’t approve of Trump’s handling of the crisis with Iran and feel less safe because of it.

The ABC News/Ipsos poll, conducted on Friday and Saturday, found that 73% of Americans are somewhat or very concerned about the possibility of getting into a full-scale war with Iran. Additionally, “56% of Americans disapprove of how President Trump is handing the situation with Iran and 52% believe the U.S. airstrike that killed Iranian General Qasem Soliemani made the United States less safe.”

Those results aligned with a Reuters/Ipsos poll and a USA Today/Ipsos, both which were conducted on Monday and Tuesday. Those surveys respectively found that 53% of Americans disapprove of Trump’s handing of Iran and 55% believe that assassinating Soliemani made the United States less safe.

Since taking credit for the airstrike that killed the Iranian commander in Baghdad earlier this month, Trump and members of his administration have stuck to the script that the assassination came in response to an “imminent threat” faced by Americans.

As Common Dreams reported, Trump claimed during a televised press conference on Thursday—without providing any evidence—that he ordered the strike because Soliemani was plotting to “blow up” the U.S. Embassy in Iraq.

The president expanded on that claim in an interview with Fox News host Laura Ingraham on Friday, alleging that Iran was planning multiple attacks. As Trump put it, “I can reveal that I believe it probably would’ve been four embassies.”

However, Esper complicated the Trump administration’s narrative Sunday when he said on CBS‘s “Face the Nation” that he “didn’t see” any specific evidence about four embassies.

“The president… didn’t cite a specific piece of evidence,” Esper said of Trump’s Fox appearance. “I didn’t see one, with regard to four embassies. What I’m saying is that I shared the president’s view that probably—my expectation was they were going to go after our embassies. The embassies are the most prominent display of American presence in a country.”

Sen. Bernie Sanders (I-Vt.), a Democratic presidential primary candidate, responded to Esper’s interview on Twitter. He suggested that Trump lying the United States into a war with Iran and vowed to do everything he can to prevent that:

Just as we were led into Vietnam and Iraq by lies, Donald Trump is misleading us on Iran. I will do everything that I can as a United States Senator to prevent such a war. https://t.co/zRvUwQIUNZ

Sen. Mike Lee (R-Utah) said on CNN‘s “State of the Union” Sunday that the Trump administration did not share the president’s claim about four embassies being under threat from Soleimani’s forces during a classified briefing he attended.

“I didn’t hear anything about that and several of my colleagues have said the same,” Lee told CNN, “so that was news to me. It certainly wasn’t something that I recall being raised in the classified briefing.”

Sen. Mike Lee (R-Utah) said on CNN that the Trump administration did not brief him and other members of Congress that Iran was allegedly plotting attacks on four U.S. embassies, as Trump claimed in an interview with Fox News on Friday. https://t.co/Obffnkw4Q7

Lee revealed on Saturday that he was signing on as a co-sponsor to Sanders’ bill that would freeze funding for any U.S. military action against Iran without the approval of Congress. The announcement came in a joint statement from Lee and Sanders.

“As United States senators, we often disagree on many issues. But standing up for the Constitution is not about partisanship,” Lee and Sanders said. “The Founding Fathers were absolutely clear. They wanted to ensure that our country avoided needless conflict and they understood that presidential war-making would be harmful to our democracy.”

“Our bill—the No War Against Iran Act—utilizes Congress’s power of the purse to block any funds from going to an unauthorized war with Iran,” they added. “As our country faces the possibility of another devastating conflict in the Middle East that could cost countless lives and trillions of dollars, the Senate must vote on our legislation without delay.”