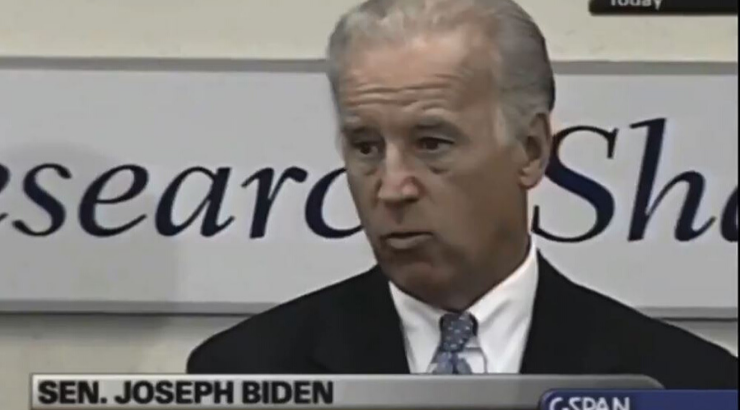 Yet another video of Democratic primary front runner Joe Biden passionately defending the 2003 Iraq invasion and occupation has resurfaced and is going viral. In it he even sings George W. Bush’s praises at a moment which came a mere few months after the now infamous “Mission Accomplished” stunt aboard the aircraft carrier USS Abraham Lincoln.

This comes in a campaign where he’s lied repeatedly about his leading role in pushing the war authorization through the Senate five months before the March 2003 invasion, seeking to distance himself and methodically conceal the facts now that public opinion has long shifted. It also has resurfaced at a moment John Kerry is currently making the rounds on major networks defending Biden against Bernie Sanders’ criticism of Biden’s clear pro-war record.

At a crucial moment Biden’s speech, delivered at the Hawkish DC Brookings Institution in July 2003 actually slammed anti-war Democrats and simultaneously upheld Bush and his disastrous war as “bold and popular” and promised further support to the neocon administration.

BREAKING: Video emerges of @JoeBiden criticizing antiwar Dems, praising Bush for leading America into the Iraq War & promising he will support Bush's continuation of the war

"The president of the United States is a bold leader & he is popular…I & many others will support him" pic.twitter.com/Sx2zsdbSJV

“Some in my own party have said that it was a mistake to go to Iraq in the first place and believe that it’s not worth the cost, whatever benefit may flow from our engagement in Iraq,” then Delaware Senator Biden said.

“But the cost of not acting against Saddam I think would have been much greater, and so is the cost, and so will be the cost of not finishing this job. The President of the United States [Bush] is a bold leader, and he is popular.”

He continued, advocating for the Bush plan of occupation with no exit or concrete strategy: “The stakes are high, and the need for leadership is great. I wish he’d use some of his stored-up popularity to make what I admit is not a very popular case, but I, and many others, will support him when he makes the case.”

Meanwhile, just this weekend John Kerry — among the top Democrats to have recently endorsed Biden — was on CBS’ Face the Nation to make excuses and continue to spin Biden’s Iraq War vote and advocacy.

"I think Bernie regrettably is distorting Joe's record…" he says from the Biden campaign bus in Iowa. @CBSNews w/@margbrennan pic.twitter.com/xd0vs2uu5m

The Sanders campaign punched back immediately after this latest Kerry interview, with spokesman Jeff Weaver saying the following:

“It is appalling that after 18 years Joe Biden still refuses to admit he was dead wrong on the Iraq War, the worst foreign policy blunder in modern American history,” he said in a statement. “Bernie Sanders saw the same information and had the judgment to vote against the Iraq War.”

This further follows last week The Intercept resurrecting a clip which showed Biden a full five years before the 2003 invasion arguing during a Senate Foreign Relations Committee hearing that “taking Saddam down” should be a top US priority.

In the 1998 Senate hearing he appeared to even argue for preemptive attack:

But again Kerry’s lame defense of Biden’s record focuses on flawed execution of the war: Former Secretary of State John Kerry defended former Vice President Biden over the Iraq War, saying that the George W. Bush administration “broke their word with respect to how they would proceed” in Iraq, NBC summarized.

Some progressives who in the lead up to the Iraq invasion were among the very anti-war voices being told by Biden to essentially shut-up and support Bush’s war are now livid.

This should be disqualifying for Biden. Disqualifying. https://t.co/oewYDQk7B9

“This should be disqualifying for Biden. Disqualifying” — writes journalist for The Intercept and Al Jazeera Mehdi Hasan.

It should also be noted that there’s archived footage showing that as Obama’s Vice President, Biden even praised Dick Cheney as a “decent man” from whom he’s received valuable guidance.

“We’re gonna have to start it alone… taking the Son-of-a… taking Saddam down.”