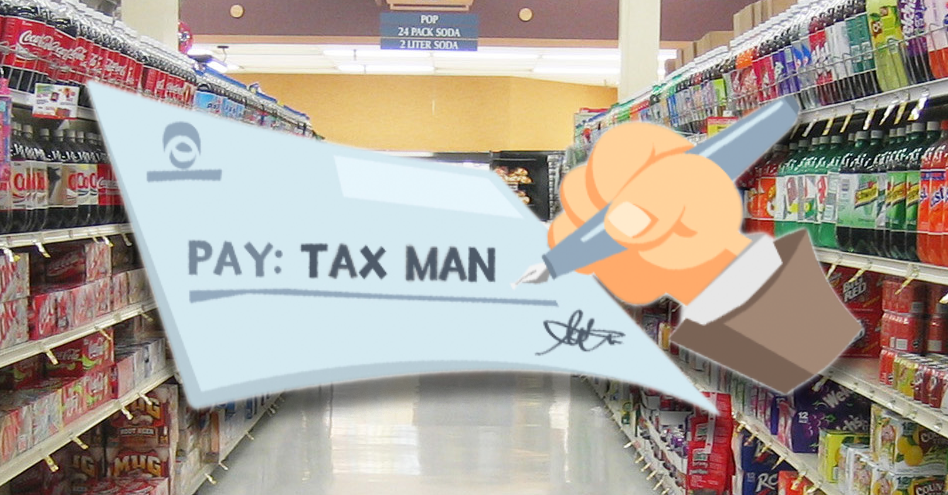 When Philadelphia became the first US city to pass a soda tax last summer, city officials were eagerly looking forward to the surplus-tax funded windfall to plug gaping budget deficits (and, since this is Philadelphia, the occasional embezzlement scheme). Then, one month ago, after the tax went into effect on January 1st we showed the tax applied in practice: a receipt for a 10 pack of flavored water carried a 51% beverage tax. And since  PA has a sales tax of 6% and Philly already charges another 2%, the total sales tax was 8%. In other words, a purchase which until last year came to $6.47 had overnight become $9.75.

What happened next? Precisely what most expected would happen: full blown sticker shock, and a collapse in purchases.

According to Philly.com reports, two months into the city’s sweetened-beverage tax, supermarkets and distributors are reporting a 30% to 50% drop in beverage sales and – adding insult to injury – are now planning for layoffs.

One of the city’s largest distributors told the Philadelphia website it would cut 20% of its workforce in March, and an owner of six ShopRite stores in Philadelphia says he expects to shed 300 workers this spring. “People are seeing sales decline larger than anything they’ve seen up to this point in the city,” said Alex Baloga, vice president of external relations at the Pennsylvania Food Merchants Association.

Since all of this is taking place as previewed in a recent post: “The ‘Soda Police’ Just Learned A Valuable Lesson About Taxes“, we doubt it would come as a surprise to anyone, although we are confident that Philadelphia city workers will be amazed by these unexpected developments.

Sure enough, in response instead of admitting the tax was a bad decision, the city lashed out by launching the latest “fake news” campaign, when it questioned the legitimacy of the early figures and predicted that customers responding to the initial sticker shock by shopping outside the city would return. “We have no way of knowing if their sales figures and predicted job losses are anything more than fear-mongering to prevent this from happening in other cities,” said city spokesman Mike Dunn.

“I didn’t think it was possible for the soda industry to be any greedier,” Kenney said in an emailed statement. “…They are so committed to stopping this tax from spreading to other cities, that they are not only passing the tax they should be paying onto their customer, they are actually willing to threaten working men and women’s jobs rather than marginally reduce their seven figure bonuses.”

The 1.5-cent-per-ounce tax on sweetened and diet beverages is funding nearly 2,000 pre-K seats this year as well as several community schools, and the city hopes will bring in $92 million per year for the education programs and to in part fund renovated parks and recreation centers. To hit its annual target, the city needs to collect $7.6 million a month in tax revenue. The first collection was due Feb. 21 but collection information won’t be available until next month.  Early projections from the city’s quarterly manager’s report predict only $2.3 million will come through in the first collection. Dunn says that figure is expected to rise and the city still anticipates hitting its goal for the year.

The city predicted a 27% sales decline industry-wide as a result of the tax but early returns from some beverage sellers show far higher losses, fueling a resurgence of the anti-soda tax coalition that fought vigorously against the tax last summer.

Bob Brockway, chief operating officer of Canada Dry Delaware Valley, which distributes about 20 percent of the city’s soft drinks, said sales were down 45 percent in Philadelphia. The company will lay off 20 percent of its workforce the first week in March. The distributor is a subsidiary of Honickman Affiliates, owned by Harold Honickman, who helped lead the opposition to the tax last summer. The 35 jobs on the line include managers, sales people, and drivers, Brockway said. Sales are up about 20 percent in the suburbs, but that hasn’t helped the business break even, he said.

On the whole, the company’s sales are down about 30 percent, Brockway said: “We don’t anticipate people coming back.”

The situation is worse at other outlets.

Jeff Brown, CEO of Brown’s Super Stores, which manages six ShopRite stores in the city, said beverage sales were down 50 percent from Jan. 1 to Feb. 17 compared with the same period in 2016.

Again, that was to be expected, but what was more troubling is a 15% dip in overall sales at city stores, meaning that instead of merely reallocating funds, the tax has resulted in a net loss of purchasing power. “People didn’t change what they drink,” Brown said. “They changed where they’re buying it.” And the biggest loser: the city of Philadelphia.

But it gets even worse: since January, Brown said, he has had to cut 6,000 employee hours, he said. He said he suspects he will lose about 300 people, which amounts to one-fifth of his total workforce voluntarily and through layoffs in coming months. To keep customers, Brown has ordered more tea and lemonade powders, which are tax-exempt. He’s stocking shelves with lower-quantity sugary drinks, which are easier to sell than the two-liter bottles or 12-packs.

Day’s Beverages, an independent soft-drink distributor, has seen a steep decline in Philadelphia offset by a 50 percent boost in Camden, Wilmington, and Bensalem, owner David Day said. Day also distributes to 18 other states, but Philadelphia makes up 30 percent of his market. His carry-out business has ballooned since the tax, he said.

Day is a registered distributor with the city and required to remit a monthly payment on any taxed beverages that go on to be sold in Philadelphia. He sent payment in last week for deliveries he made throughout Philadelphia. But Day doesn’t tax people coming in to buy soda directly from his warehouse.

“We’re one block out of Philadelphia, in Delaware County, and you can’t imagine how many stores are coming to our warehouse and picking up our soda. I don’t care what they do — they’re coming here as a cash-and-carry. Our doors are open to everyone,” he said. “We don’t police where it’s going.”

Another loser: labor unions. Danny Grace, head of the Teamsters union, representing many of the drivers, said members have seen pay cut by as much as 70 percent because they’re moving fewer products. “Many of them have quit as a result,” Grace said. He did not provide specific figures.

Not surprisingly, legal challenges against the soda tax persist. The Pennsylvania Food Merchants Association, in conjunction with movie theaters, restaurants, and supermarkets, is mounting a new “Ax the Bev Tax” campaign this week. Participating businesses will hang up signs encouraging people to call their elected representatives. Some legislators in Harrisburg weighed in this month, with an amicus brief calling on the court to overturn the tax. Within City Hall, legislators are taking a wait-and-see approach. Some Council members have encouraged patience.

“Initially people are upset and drive over the city line, but then they do the math and realize the cost of gas or the pure inconvenience doesn’t make it worth it,” Dunn said.

J. Del Conner is one of the 210 distributors registered with the city. He owns Dr. Physick soda, a tiny beverage-maker that sells about 500 cases a year. The soda is named after Conner’s great-great-great-grandfather, a Philadelphia pharmacist who introduced carbonated water into fruit syrup as a way to help relieve gastric disorders.

Conner usually sells about 10 cases a month in winter but didn’t send any money to the city this month.

“So far in January and February we’ve had no sales,” he said. “Zero.”