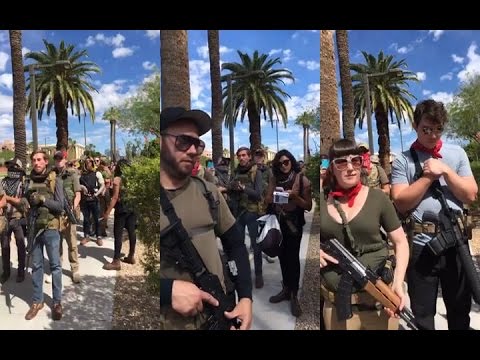 A reporter for the New Phoenix Times was assaulted by a member of a left-wing radical group for filming their armed march outside the Arizona capitol.

Stephen Lemons was recording the march of a group of about 40 people wearing brown shirts and carrying rifles when he was approached by one of the marchers and asked to stop recording.

The marchers were members of “Antifascist Action Phoenix” (Antifa), “Arizona Brown Berets,” and the “Phoenix John Brown Gun Club,” and one of the apparent-militia members told Lemons they wouldn’t answer at the time.

Lemons continued recording video, and began asking questions to one of the militia members.

“Hey man so why did you decide to come out today?” Lemons asked the militia man.

The man responded “to film you.”

The reporter then asked the man, “What kind of firearm is that?” and walked alongside the gun-toting marcher.

That’s when the militia member assaulted Lemons, appearing to elbow and shove him backwards.

“Oh I like to see the left wing get feisty, do you assault reporters a lot? You’re a big bad ass because you got a gun, you want to shoot me?” Lemons asked.

“No, but I’ll follow you around the rest of the afternoon, though,” the militia man answered.

Lemons then walked to the front of the march and began recording the march from the front.

The march halted, and another man walked up from the back of the march requesting the reporter’s business card.

“Can I see your business card?” the apparent militia leader asked.

“Can I see?” the militia leader reiterated, asking for the reporter’s press credentials.

“No, this is not a show-me-your-papers state and you’re not law enforcement, you tell me who you are and I’ll give it to you,” Lemons answered.

“You’re right but what I am going to ask you to do though on a friendly level is for you to stop following us,” the man says.

“No I’m not going to leave, you going to shoot me?” Lemons told the militia leader.

“No I’m not going to shoot you, I am going to warn you that we are not responsible for anything that might happen to that phone.”

The wanna-be militia leader then argued with Lemons about whether or not his militia group was marching, whether they were really a militia or not, and the militia members began to claim that Lemons actually assaulted and kicked the man who assaulted him.

Ironically, Lemons claimed he would have supported the radical left-wing marchers had they not infringed his First Amendment right to record and assaulted him.

“This asshole here assaulted me, basically I think that’s interesting because I am usually documenting right wing hate groups and I would be cool with you guys being down here but the hostility is not cool,” the reporter says.

The confrontation ended with the militia slowly dispersing, and then one militia members blocking Lemons’ path so he could not record the license plates of the brown shirt brigade members.

Antifa and similar radical left-wing groups have been causing violence across the U.S. in recent months. One Antifa member even threatened the daughter of We Are Change reporter Cassandra Fairbanks.

You can watch the full video of Stephen Lemons and the Phoenix brown shirts below: