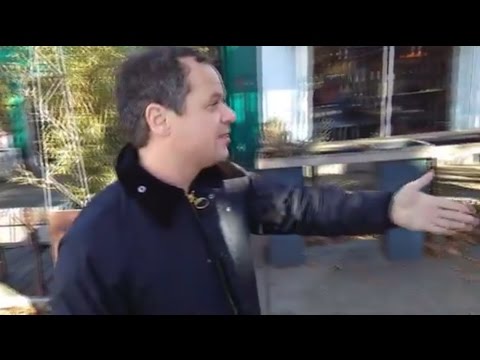 In a video uploaded to YouTube, some “Pizza Gate” protesters barraged the owner of Comet Ping Pong, James Alefantis, and asked about the questionable pictures on his Instagram account.

The video starts out with a protester questioning Alefantis about the image of a little girl taped to a table. Alefantis then responded “It’s simple is all, it’s absurd to be here that image is of my god daughter. They are playing around as two kids play together.”

One protester replied, “I came all the way from Philadelphia to be here, man.” Another protester then started talking about how he used to work at a school.

Alefantis interrupted the man saying, “Do you have any other images that you find offensive?”

The protesters then questioned him about the picture of a baby with cash in it’s mouth and one man remarked, “If I worked in a school I wouldn’t be caught dead with pictures of toddlers chewing on bags of money on my Instagram.”

A protester then responded, “Dude if you don’t see the offense in this, it’s cool.”

Alefantis then said, “I think that’s two kids playing together, and it’s very sick and strange for you to see suspicion.”

“Oh yeah I know we always tape children to tables,” the protester said.

Alefantis then interrupted again and said, “pizza at the pizzeria is a codeword cheese, right?”

Actually yes James, pizza is a codeword—not only was “cheese pizza” (CP) used on 4chan but many pedophile circles use it on the darkweb. They then use the word “slices” to describe how many images they want see.

Alefantis then walked back inside. He returned later on, and protesters continued to question him on the same picture of a little girl strapped to the table. He responded, saying, “that’s my god-daughter. That’s her sister. It’s a cute picture, they’re playing together… That was put on there 126 weeks ago.”

Alefantis then offered the protesters a tour of his restaurant. They walked inside and he showed them the bar, kitchen, ping pong room, pizza oven, the “mysterious” hidden secret bathrooms, and a backroom for kids’ pizza parties.

The protester then asked Alefantis what made him get into the pizza business.

He responded, “I didn’t know how to do anything else well. I needed a job and I didn’t have any skills, and I knew how to cook, so 10 years ago we opened this pizza place and basically no body came and eventually it got real popular and now it’s a beloved part of the community.”

Alefantis then started talking about his art in his restaurant, and the protester noted that some of Alefantis’s artwork is missing.

Alefantis then said, “the controversial murals got beat up in the ping pong room so they have been down for 5-6 years maybe.”

It’s also worth noting that the weird demonic-like creature drawing  in the bathroom wall is also missing and cleaned up.

I’m not here to bash a business and ruin someone’s life, but if this place really was a front for a child trafficking ring, they would have had time to clean up by now—that’s just common sense.

It was very gracious of Alefantis to offer a tour to these people and he really didn’t have to do that.

Regardless, as an investigative journalist, it’s my job to question and uncover the truth. If Alefantis is not involved in child trafficking, then his statement, “that’s my god daughter” should be provable.

I’m here to uncover the truth and nothing more. I honestly hope that there are no links made to this man regarding child trafficking. That is the last thing I’d want. I want all of this to be fake, but maybe I know too much information regarding elite pedophiles and disclosure.

I have past experience hunting pedos on the darknet and clear-net, so maybe I am a bit too emotionally involved in all this code word stuff. It’s also potentially possible that Comet Ping Pong has nothing to do with this, while another pizza place does, but the missing artwork and weird Sasha lord birthday party in which an audience remember remarks about pedophilia and “Majestic Ape” (Amanda Kleinsman) jokes back “we all have our preferences” is worrying to say the least.