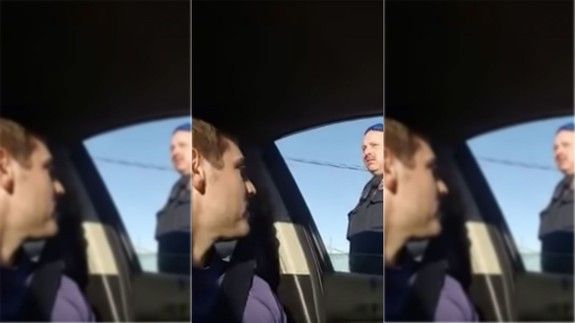 The officer tried to lie to an attorney about a “new law” prohibiting him from filming police.

Jesse Bright, a resident of North Carolina, is an attorney who drives for Uber on the side in order to pay off his student loans.

He’s an advocate for people filming police during encounters with them in order to properly document interactions, should they find themselves in court, so when he was pulled over last month one of the first things he did was take out his phone and start recording.

It turned out that the passenger he had in his car had just exited a known drug house, where he may have been involved in an illegal transaction, but Bright was unaware of any of these details before police descended on the vehicle to detain the passenger. Bright decided to film, though he wasn’t the one being arrested, and was told almost immediately by Wilmington police Sgt. Kenneth Becker to stop recording. When Bright refused, Becker came around and falsely stated,

“There’s a new law, you’re not allowed to record me.”

When Bright responded by saying, “What is the law?” Becker proceeded to tell him to step out of the car.

The officer was not aware that Bright was also an attorney, even questioning him after he declared his legal background, and continued to be rude to Bright throughout the long encounter. Becker made the decision on the spot to call in a K-9 unit to sniff Bright’s car, and even said, “You better hope we don’t find something in your car.”

The suspicion surrounding Bright is reasonable, considering he had just left a drug house with a stranger, but it wasn’t until Bright defied Becker by continuing to exercise his right to record that the officers make him exit the vehicle in order to search it. Later, a K-9 indicates that there may be drugs in the car, which gives the police probable cause to search the vehicle, and Bright is met with attitude by Becker, who seems pleased to search Bright’s car.

“They said I should have known it was a drug house, and I tried to tell them I was an Uber driver,” Bright said. “They thought it was some sort of cover.”

The problem at large in this case is Becker’s attempt to lie about a law prohibiting people from filming police officers. If Bright hadn’t been an attorney, like most citizens, he may have believed the officer, stopped recording, and risked not having visual proof of anything that occurred in the following interaction. It begs the question of how many times Becker and other officers all over the country have had people stop recording under the pretense that the law prohibited them from doing so.

As for the Wilmington Police Department, an internal affairs investigation is underway regarding this incident and an official statement was released.

“Taking photographs and videos of people that are in plain sight including the police is your legal right,” the statement said. “As a matter of fact we invite citizens to do so when they believe it is necessary. We believe that public videos help to protect the police as well as our citizens and provide critical information during police and citizen interaction.”

Bright did not want to publicize the incident, but when Becker never returned his phone calls and the department didn’t apologize for what occurred, he decided to release the video. He wants this video to serve as a warning to others who find themselves in similar situations.

“I think the video shows that the police are willing to lie in order to coerce people into doing what they want them to do,” he said. “You just have to know your rights.”

Watch the beginning of the encounter below.

This article (Police Attempt To Lie To Attorney About “New Law” To Force Him To Stop Recording) is free and open source. You have permission to republish this article under a Creative Commons license with attribution to the author and TrueActivist.com