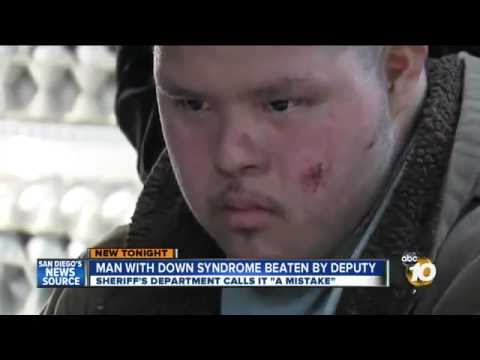 A 21-year-old developmentally disabled man who was hit and forced to the ground, as well as pepper sprayed, before he was taken into custody by California sheriff’s deputies.

According to CNN, Antonio Martinez was taken to the hospital and he was also detained for possible obstruction of justice, but San Diego County Sheriff’s Department spokesman Jan Caldwell said that there was no citation or charge filed on that or other counts.

According to sources, the incident took place on last Tuesday night, near Martinez’s family bakery. Deputies were looking for a possible domestic violence suspect. Caldwell said that deputies spotted Martinez walk by and he was covering his head with a sweatshirt hood and he had his hands in his pockets.

Martinez is well-known around the Vista neighborhood, where he lives and his family has a bakery, his sister said. He was out walking between his home and the bakery when the deputy called out to him, at which point neighborhood men explained that the young man had Down Syndrome and wasn’t doing anything wrong, according to Jessica Martinez.
The deputy didn’t back off. Instead, while trying “to gain compliance and prevent a possible escape,” he used pepper spray on Antonio Martinez, said Caldwell from the Sheriff’s Department.
The deputy began using a baton as an agitated crowd approached, the spokeswoman added. The deputy hit Antonio Martinez with it, forcing him to the ground, then levied “a couple more strikes to get his hands free,” Sheriff’s Department Capt. Joe Rodi told CNN affiliate KGTV.

According to UPI, deputies asked him to stop and when he didn’t stop, a deputy used pepper spray on Martinez and then struck him with a baton, which sent him to the ground. Martinez was then handcuffed.

A witness said that she told the deputy that Martinez had a disability several times before and during the confrontation.

Caldwell said that it was dark out and the deputy could not tell that Martinez had a disability.

Jessica Martinez, the victim’s sister, said that her father is thinking about suing the sheriff’s department.