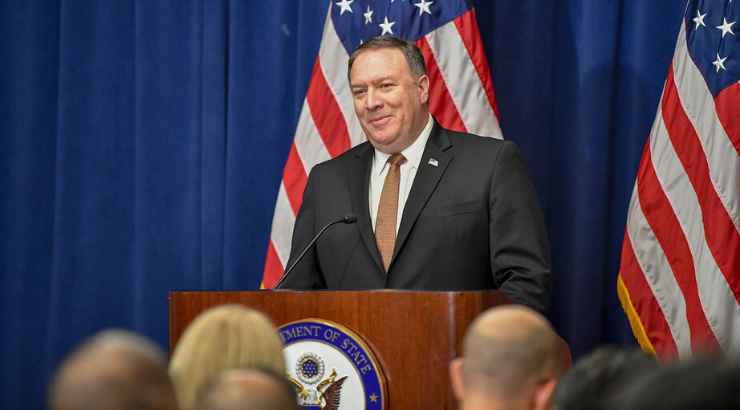 Iranian commander Qassem Soleimani was targeted for assassination as part of a “bigger strategy” of deterring challenges by U.S. adversaries including Russia and China, U.S. Secretary of State Mike Pompeo has said according to reports. The recent statements have called into question the already dubious claims that Soleimani was killed because he was about to carry an “imminent” attack.

“I want to lay this out in context of what we’ve been trying to do,” Pompeo said in a speech titled The Restoration of Deterrence: The Iranian Example. “President Trump and those of us in his national security team are re-establishing deterrence—real deterrence—against the Islamic Republic of Iran.”

The idea that Soleimani posed an imminent threat to U.S. assets was shaky from the outset. As CNN notes, Pompeo initially said that Soleimani was killed as he was involved in plotting an “imminent attack” against American lives. The Pentagon appeared to offer a different story when releasing a statement that the strike was carried out to deter future attacks against U.S. interests.

However, Attorney General William Barr took Pompeo’s position one step further by referring to the threat posed by Soleimani as “something of a red herring.”

“I believe there was intelligence of imminent attack,” Barr said during a press conference, “but I do believe that the concept of imminence is something of a red herring.”

“I think when you’re dealing with a situation where you already have attacks underway, you know there is a campaign that involves repeated attacks on American targets, I don’t think there’s a requirement frankly for, you know, knowing the exact time and place of the next attack. And that certainly was the position of the Obama (sic) when it droned leaders of terrorist organizations,” Barr added.

It is worth noting that the exact details of the administration’s legal justification for the strike remain unclear as the notification sent to Congress in the days after the operation took place is classified.

Putting aside the legal justification, by all accounts the strategic component of the deadly strike is slowly becoming more transparent. As Pompeo explained:

“The importance of deterrence isn’t confined to Iran. In all cases, we must deter foes to defend freedom. That’s the whole point of President Trump’s work to make our military the strongest it’s ever been.”

Pompeo further cited many actions the Trump administration has taken that have targeted both China and Russia, including the provision of lethal military aid to Ukraine.

Demonstrating his sincerity regarding this tactic, Pompeo bragged about the killing of “a couple hundred Russians” by U.S. forces in Syria, saying that the Russians had “met their match” early last year.

“The administration announced a nuclear posture review that has put Russia on notice that we are gonna recapitalize our deterrent force,” Pompeo also said at the time.

Whether or not this is therefore a strategy of the president himself or is something Pompeo has been working on for some time now is unclear. According to various reports, it was Pompeo who rallied Trump to approve the strike in the first place.

Following the removal of crazed neocon John Bolton, the power and sway Pompeo has with the president has been compared to that of Henry Kissinger.