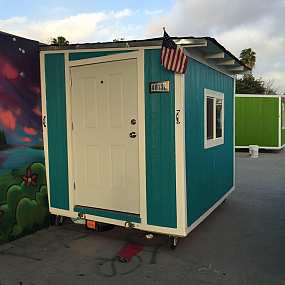 Government is just another name for how we make sure generous attempts to better the lives of the destitute come to naught, as reported in the Los Angeles Times today under the headline: “L.A. seizes tiny houses from homeless people.”

A man named Elvis Summers had been building and giving away small wooden houses with solar lights (and American flags!) to the homeless in L.A.; the city has already confiscated three of them on freeway overpasses, and plans to snatch 7 more of them today, according to the city Bureau of Sanitation. Councilman Curren Price ordered the theft.

The city is storing them for now on a lot, but will eventually just destroy them.

Summers has built and given away 37 of them, and says he’s now taking some of them back and into storage to avoid the city stealing and wrecking them.

Kenner Jackson, who lives in a tiny house with his wife, Becky, and terrier, Cowboy, said officials were “taking houses from people who need them right now. … Their plan isn’t anything.”

Jackson said he didn’t know where they would go if their house is taken Thursday. “This is our foundation,” he said.

Jackson said the city hauled away homeless people’s possessions while leaving bulky items like mattresses and chairs that residents dump next to the freeway.

Johnny Horton, 60, whose heavily bandaged legs were scored with wounds from uncontrolled diabetes, wept silently Wednesday as he contemplated going back to sleeping in the street….

And the city makes sure we know, so you know it’s all cool that these people are shelterless by deliberate city action and theft again:

[City sanitation department spokesperson Elana] Stern said authorities destroyed needles, drug setups and a gun seized from one or more of the houses during the earlier cleanup.

Back in October I wrote on the un-musical question: “How Will We Help the Homeless Without Government, Which Just Sent Squads of Cops to Destroy “Microhouses” for Homeless on Government Property in Denver?