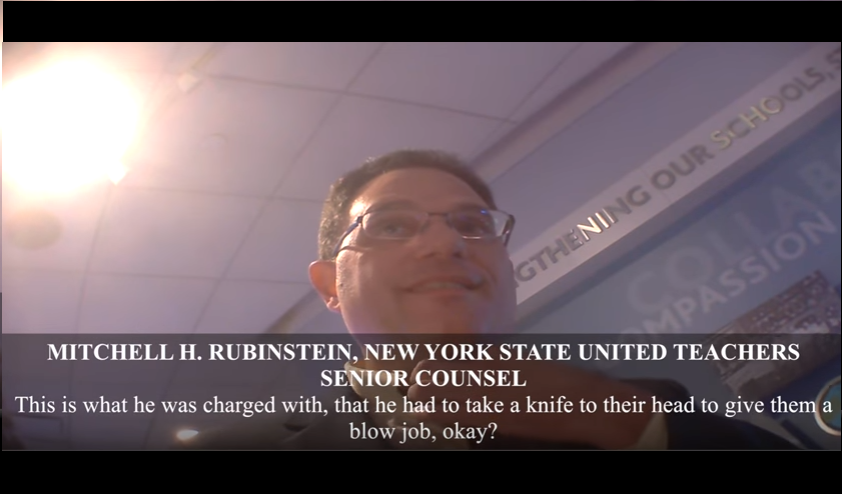 A shocking new undercover video from Project Veritas captured the senior counsel for a New York teacher’s union admitting to defending a junior high school teacher who forced students to perform oral sex at knife point. It remains unknown if the predator is still at large.

The 16-minute long hidden-camera video that was released on Tuesday morning is sure to chill parents to their cores.

Unknowingly speaking to a Project Veritas undercover journalist at a union holiday party in December, 2015, Mitchell Rubinstein, the senior counsel for New York State United Teachers, smiled continuously as he described the case of a junior high school teacher he defended two decades ago.

The teacher, referred to only as “Mike,” was accused by multiple male students of forcing them to perform oral sex at knife-point, according to Rubinstein. The union lawyer describes how there was overwhelming evidence of his guilt, including students knowing the name of his pet parrot, his phone number, and describing furniture in his home. He also asserts that the court had subpoenaed the teacher’s phone records, and found calls to one of his alleged victim’s girlfriends — implying that the student was in fact in his home.

Rubinstein also claimed that the teacher admit to the sexual abuse.

Rubinstein casually describes informing the teacher that he would go to jail if “this goes bad.”

“And I go to him, dude, you know, you’re going to go to jail if this goes bad, because like forced sex with like a minor. This is like the worst…you know, as bad as it gets,” Rubinstein explains.

The Project Veritas journalist asks, “but you were defending the teacher?”

The teacher was eventually convinced to resign, but was not convicted and therefore could still be at large, Project Veritas notes. It is possible that he could still be teaching, as he was not registered as a sex offender.

Rubinstein admits in the footage that he does not know what happened to Mike, other than a failed run for city council.

“Project Veritas was investigating an educational story and attended the UFT Christmas Party. An undercover journalist randomly engaged in a conversation with Mitchell Rubinstein. Project veritas was not targeting Rubinstein but shortly realized he would become our next unwilling internet sensation following his remarks” a Project Veritas spokesperson told We Are Change, when asked how they found him.

Project Veritas spent hundreds of man-hours trying to track down the identity of the teacher. Their investigation included sending a second undercover journalist to meet with him and even hiring two outside private investigation firms. Still, they were unable to find his last name.

“We hope that by releasing this video, people will come forward and help us find Mike,” James O’Keefe, founder of Project Veritas, wrote in a press release.

Teachers unions have long protected dirty educators — no matter the heinous nature of the allegations.

When unions and dirty teachers win, the students and our communities lose.

“Are the rights of the teachers union members so absolute that it can supersede the rights of a child not to be forced to have sex while a knife is pointed at their throat?” O’Keefe asks.