Researchers build battery that can be charged in one minute 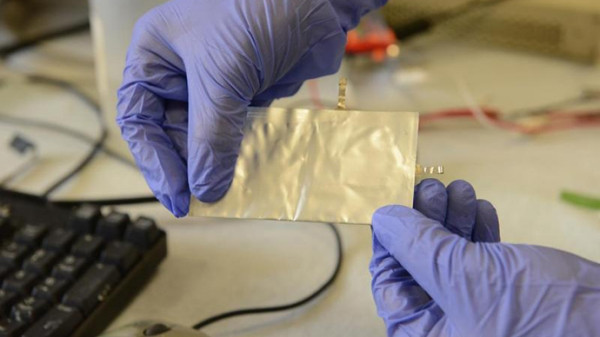 If there’s one major issue plaguing smartphones, smartwatches and other gadgets we use every day, it’s battery life. Now, a team of researchers at Stanford University has built an aluminum-ion battery prototype which offers several improvements over today’s ubiquitous lithium-ion batteries, including super-fast charging times.

The team’s aluminum-ion battery sounds like a dream come true for gadget manufacturers — a perfect battery with few flaws.

Until now, aluminum-ion batteries weren’t able to produce a high enough voltage, especially after many recharge cycles. But the prototype created by the Stanford researchers consists of an aluminum anode and a cathode made of graphite — a combination of materials that allows for producing sufficient voltage (about two volts), even after thousands of recharge cycles.

The battery can recharge in one minute, it’s flexible (meaning it can be bent to fit more snugly into various gadgets), and it’s potentially inexpensive, since aluminum is cheaper than lithium. Furthermore, the materials are safer than the ones in lithium-ion batteries, which can catch fire in certain situations. In contrast, the aluminum-ion battery won’t catch fire even if you drill a hole through it while it’s working.

“Our battery has everything else you’d dream that a battery should have: inexpensive electrodes, good safety, high-speed charging, flexibility and long cycle life,” Hongjie Dai, a chemistry professor at Stanford who’s leading the research, told Stanford News. “I see this as a new battery in its early days. It’s quite exciting,”