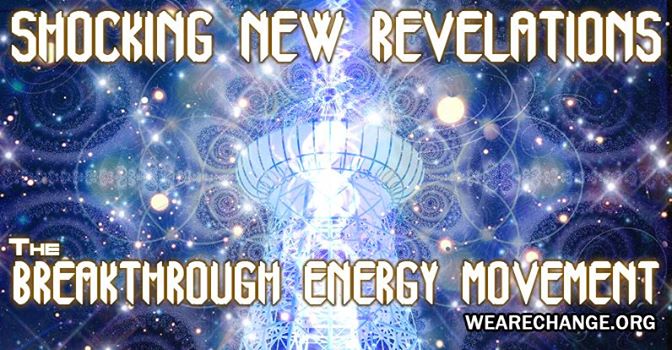 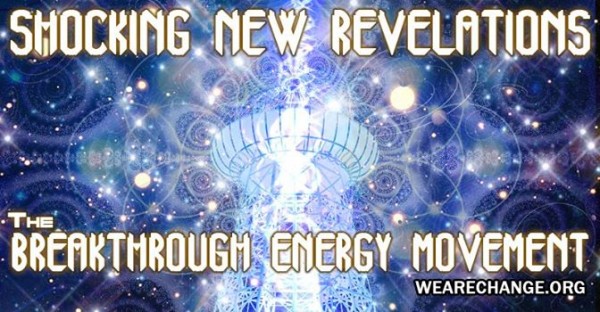 “Nothing is impossible,except that the state of your mind makes it so.”

A revolutionary, non-profit organization of inventors, researchers, and cutting-edge thinkers is gaining major momentum in the information arena. This coalition, known as the Breakthrough Energy Movement, is comprised of prominent figures in the alternative or new energy movement.

One such individual is Fernando Vossa, who has worked on design teams for major brands such as Microsoft, Sony, US-WEST, GE-Aerospace, and is a technology ambassador for the Searl Magnetics Team, which is developing the Searl Effect Generator or SEG. The Searl Effect technology was developed by professor John R.R. Searl and allegedly can create an electromagnetic field, in turn powering itself from that field and the energy already present in our environment.

The physics don’t disobey the law of thermodynamics and if the law of Squares which was discovered by Searl turn out to be feasible; this technology has the capability to supply limitless power sustainably, without any waste products in the environment or even mechanical wear to the device. A demonstration by a mock model shows the science in action, with some curious inventors conducting experiments in their own garages to get a multi-faceted view of the phenomenon.

The SEG may have the potential to recreate the world of power but Searl has yet to create an available and public device for the commercial market.

Another figure is Foster Gamble, co-creator of the Thrive Movement and the internet film THRIVE which has accumulated over 22 million hits on the Internet. Gamble has assembled dozens of examples of inventors, scientists, and physicists who all correlate the alleged discovery (or rather rediscovery) of an energy supply that naturally occurs in nature according to the mathematical re-occurrence of the Torus ‘code’ that has been found in many levels of reality down to a subatomic level. The film describes this and other themes in depth, but basically if the devices Gamble describes and shows were to be real all Humanity would need to do is align to an already present energy in our environment to end world hunger and the energy crisis via in-tune technology which have already been created.

“Electric power is everywhere – in unlimited quantities and can drive the world’s machinery without the need of coal, oil, gas or any other of the common fuels.” – Nikola Tesla

We as a species have passed the iconic peak of oil production. There is a blatant suppression of not only alternative energy sources, but also vehicles that still run on fossil fuels. The electric car company, Tesla Motors, has been openly suppressed by politicians and lobbyists with some states banning the sale of them altogether. In 2007, Popular Mechanics wrote an article detailing how every major automobile manufacturer could easily create vehicles that drive at roughly 100 mpg. In Europe, it is not uncommon to have automobiles that get roughly 50 miles per gallon sometimes 250 miles per gallon, but they are not commercially available in the U.S.

“Clean, safe, abundant, inexpensive energy for all… stabilized climate… clean and healthy water, food, and air for all… beautiful blue skies over our cities…”

The idea of alternative and new energy technologies are not as far fetched as many think, cold fusion has been demonized since the late 80’s as ‘impossible’ to market and attain. Yet Italian inventor Andrea Rossi has already marketed and patented a cold fusion generator he calls the E-CAT.

It supplies over a MW (Megawatt) which is enough to power over 600-1000 homes, Rossi also has a model of E-CAT called the ‘Hot Cat’ and it has been confirmed to work by top physicists. Rossi is also about to market a 10kW home unit and is simply waiting for certification by government. He was featured in the magazine Popular Science in November 2012 with an engaging analysis of cold fusion, although those who cover new energy technologies say the article was a derogatory piece. Despite the controversy and doubt surrounding the subject, Rossi has still created a practical machine.

Inventors Nilson Barbosa and Cleriston Leal of Imperatriz MA, Brazil claim to have invented a ‘free-energy’ device that is commercially ready for the market. It is called Earth-Electron Captor or Free-Space Electron Captor, it makes no noise, is self-looped, and mobile. Their company, Evolutions in Energy, details how it works, but basically the device is electromagnetically centered and moves energy particles based on working instantly through various interactions of naturally occurring electrical fields. It manipulates natural energy without a by-product or secondary reactions. It has not been confirmed whether their generator even works but the very idea is worthy of investigation.

Based in Menlo, California, Solar Hydrogen Trends, Inc. announced on March 5th, 2014 in a press release that they have invented a fully functional, hydrogen reactor that uses water as its main fuel and is 100% carbon free. This reactor has the capability to power entire cities with no negative emissions, yet most of the world does not know this via the dying mainstream ‘media’. An EPA-certified national emissions testing specialist by the name of Airkinetics conducted an engineering test that measured the 250-pound hydrogen mini-reactor’s output and found the actual cubic feet per minute or ACFM at 93.1% Hydrogen content.

In basic terms this is a fully functioning reactor that is almost ready to power the entire world via one of the most common elements on this planet at a far cheaper price than fossil fuels.

In the Philippines, an inventor named Ismael Aviso claims to have created a car that is powered by a 12-volt battery. The car battery powers itself by an antenna that draws electrical energy from the electro-static or radio wave energy from its surroundings, dubbed Ambient Energy. Aviso has also created fully functioning prototype hydrogen generators, but the company claims they need more investors before they make the machines open sourced to the public. Reminiscent of Nikola Tesla’s self-powered car, Pierce-Arrow, the applications for this amazing technology are mind-blowing if their claims are legitimate.

Researching zero-point energy, Canadian born John Hutchison, whose powerful videos have propped limitless controversy, alleges his breakthroughs could revolutionize propulsion technology. Hutchison has demonstrated on over 700 occasions in laboratory settings for military scientists the effects of the Hutchison Effect. These include levitating a 60-pound cannon ball, melting metal into unknown alloys, melding wood into metal, and accidentally levitating objects in his neighbors’ houses all by Tesla coils and sound waves. All of this has been recorded and despite Huchison admitting to being “creative” with his videos the military still has shown interest in this phenomenon.

Pure Energy Systems Wiki had this to say in regards to NEST:

“The primary purpose of the site is to assist in this networking function by collecting applications or submissions from inventors, investors, professional service providers, licensees, customers, and job services.

“We want to be the watering hole where people meet up and find ways to help each other out,”

The BEM has archived its groundbreaking conferences via livestream and these are available to the public for free, they can be watched here. The next conference will be from October 10th-12th in Boulder, Colorado.

Since 1951, the United States Patent Office has held over 5000 patents, most relating towards new energy systems and technologies all for the sake of “national security”. When this is taken into your perception you see that it is possible that there truly is an agenda to suppress the unfolding of alternative power.

Whatever your opinion is on the subject of new energy sources, the common theme documented here is just a branch in an entire forest of information. The crucial message that is being portrayed is that there is an alternative to the current status quo, and those that are trailblazing within this movement are only building momentum with each passing day.