Ringling Bros. Circus To Shut Down After 146 Years And Numerous Abuse Allegations 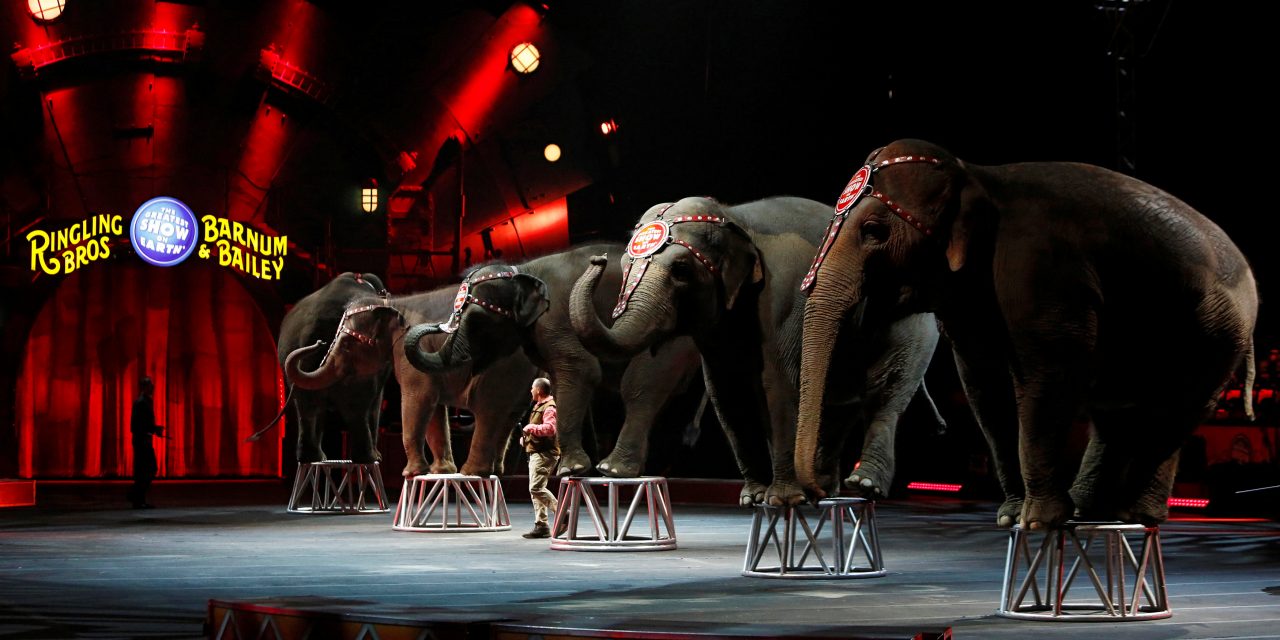 After 146 years of animal performances, clowns, and side shows, Ringling Bros. and Barnum & Bailey Circus will stop all performances — forever — as of May.

A number of factors contributed to the monumental decision, including decreased attendance, changing public perceptions, and ongoing battles with animal rights groups — multiple instances of abuse by trainers behind the scenes have plagued the world famous performance production company for years.

“There isn’t any one thing,” said Feld Entertainment CEO Kenneth Feld noted, having told startled employees Saturday night after performances in Orlando and Miami. “This has been a very difficult decision for me and for the entire family.”

Circuses have, quite simply, faded from favor — however bittersweet the nostalgic connotations.

“Ringling Bros. has two touring circuses this season and will perform 30 shows between now and May. Major stops include Atlanta, Washington, Philadelphia, Boston and Brooklyn. The final shows will be in Providence, Rhode Island, on May 7 and in Uniondale, New York, at the Nassau County Coliseum on May 21,” the Washington Post reported.

Since the mid-1800s, Barnum and Bailey has been somewhat of a household name, entertaining generations with trained elephants, sequined acrobats, clowns, tigers, and various other shows — but, for decades now, the circus has faced sharp criticism over its treatment of exotic, captive animals and the ethics of holding and training endangered and threatened species.

As the Post further explains, “Phineas Taylor Barnum made a traveling spectacle of animals and human oddities popular, while the five Ringling brothers performed juggling acts and skits from their home base in Wisconsin. Eventually, they merged and the modern circus was born. The sprawling troupes traveled around America by train, wowing audiences with the sheer scale of entertainment and exotic animals.”

But it was the treatment of those exotic animals that began to give Barnum & Bailey an horrific reputation for abuse of species endangered in the wild. A number of videos evidencing force and abuse by trainers that soured the public to circuses and animal performances years ago.

Indeed, there has been a general move away from circuses, zoos, and other entities who rely on animal captivity to make a profit, as the public learns what happens behind the scenes. While some of these businesses might be well-intentioned, ‘training’ wild animals to bend to the will of humans demands a degree of force not deemed acceptable by today’s standards.

While Ringling Bros. wasn’t entirely built around animal performances by any stretch, contention over the issue has grown exponentially in recent years — as it has for many entities in the animal captivity business. Sea World, in fact, has faced similar criticism over orca and dolphin performances seen by many as bending animal nature to the whims of human entertainment — and has been forced to cease captive breeding after public outrage.

Although the Post explains the move toward electronic forms of entertainment — first television, and now smart phones, video games, and computers — greatly reduced the appeal of the circus, that expansion included the wide availability of information, and whistleblower videos exposed the circus as a repeat abuser behind the glitzy scenes.

With diminishing crowds and growing negative perception — and an inability to sustain sufficient ticket sales under increasing overhead — the so-called Greatest Show on Earth has been left little choice but to cease operations.

As Feld sees it, lessening attention spans hindered attendance as well, “The competitor in many ways is time,” he told the Post, speaking of both shortened attention and the entertainment of a bygone era. “It’s a different model that we can’t see how it works in today’s world to justify and maintain an affordable ticket price. So you’ve got all these things working against it.”

In 1967, the Feld family purchased the circus, which had performances just under three hours. Now, shows last two hours and seven minutes — about the length of an average Hollywood movie — but audiences have been increasingly unenthused.

However, these factors don’t compare to growing outrage concerning animal rights and abuse — even among ordinary people unaffiliated with such movements, as has been the case for Sea World and its treatment of killer whales.

Animal performances — forced captivity and physically abusive training methods — no longer slip under the radar with an increasingly aware and concerned public.

“After 36 years of PETA protests,” Ingrid Newkirk, president of People for the Ethical Treatment of Animals said after the announcement of the circus closure, “which have awoken the world to the plight of animals in captivity, PETA heralds the end of what has been the saddest show on earth for wild animals, and asks all other animal circuses to follow suit, as this is a sign of changing times.”

However, as the Post notes, “In May of 2016, after a long and costly legal battle, the company removed the elephants from the shows and sent the animals to live on a conservation farm in Central Florida. The animals had been the symbol of the circus since Barnum brought an Asian elephant named Jumbo to America in 1882. In 2014, Feld Entertainment won $25.2 million in settlements from groups including the Humane Society of the United States, ending a 14-year fight over allegations that circus employees mistreated elephants.

“By the time the elephants were removed, public opinion had shifted somewhat. Los Angeles prohibited the use of bull-hooks by elephant trainers and handlers, as did Oakland, California. The city of Asheville, North Carolina nixed wild or exotic animals from performing in the municipally owned, 7,600-seat U.S. Cellular Center.”

Apparently the elephants represented to the public both a cornerstone of circus magic and the epitome of useless abuse — even earning the snide moniker, the Cruelest Show on Earth — and attendance dropped dramatically. Sea World experienced the same phenomenon over its captivity and performances by orcas, or killer whales.

It would seem, in other words, the public has finally spoken — and private businesses, once hugely profitable, have responded — it matters not how glitzy the package, the manipulation of wild animals for entertainment purposes is no longer acceptable.

Ringling Bros., the once-glorified cornerstone of entertainment in America, will now draw the curtains for the final time.

This article originally appeared on TheFreeThoughtProject.com and was authored by Claire Bernish.