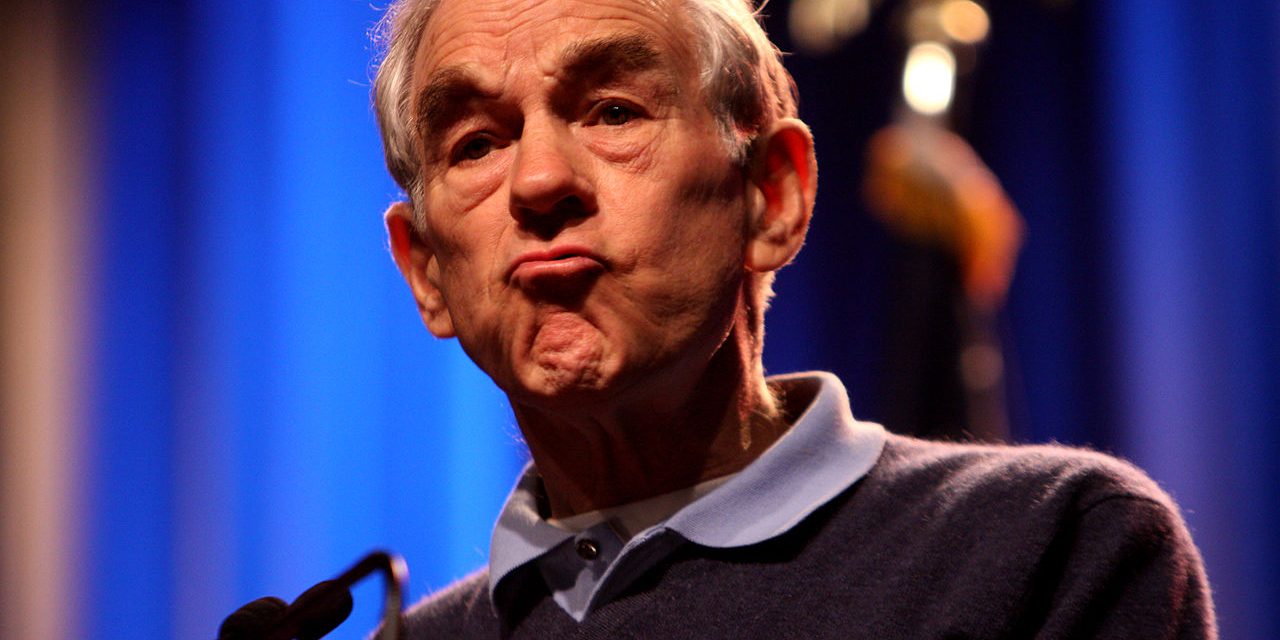 Ron Paul, the prominent libertarian communicator and three-time US presidential candidate, declared this week in a Fox Business interview that it is “fantastic” that WikiLeaks revealed on Tuesday thousands of US Central Intelligence Agency (CIA) documents and files.

Speaking with host Kennedy, Paul further says that the information exposed “indicates that liberty is in big trouble” and states his concern about there having been insufficient media coverage of the information and outlines the potential dangers related to technology…

Paul’s discussion raises the very crucial question “do we live in a police state?” As AntiWar’s Justin Raimondo warns, the latest wikileaks revelations tell us the answer is ‘Yes’.

WikiLeaks and Julian Assange would have gone down in history as the greatest enemies of government oppression of all kinds in any case, but their latest release – a comprehensive exposé of the US intelligence community’s cyberwar tools and techniques – is truly the capstone of their career. And given that this release – dubbed “Vault 7” – amounts to just one percent of the documents they intend to publish, one can only look forward to the coming days with a mixture of joyful anticipation and ominous fear.

Fear because the power of the Deep State is even more forbidding – and seemingly invincible – than anyone knew. Joyful anticipation because, for the first time, it is dawning on the most unlikely people that we are, for all intents and purposes, living in a police state. I was struck by this while watching Sean Hannity’s show last [Wednesday] night – yes, Fox is my go-to news channel – and listening to both Hannity and his guests, including the ultra-conservative Laura Ingraham, inveigh against the “Deep State.” For people like Hannity, Ingraham, and Newt Gingrich (of all people!) to be talking about the Surveillance State with fear – and outrage – in their voices says two things about our current predicament: 1) Due to the heroic efforts of Julian Assange in exposing the power and ruthlessness of the Deep State, the political landscape in this country is undergoing a major realignment, with conservatives returning to their historic role as the greatest defenders of civil liberties, and 2) American “liberalism” – which now champions the Deep State as the savior of the country –   has become a toxic brew that is fundamentally totalitarian.

On the first point: yes, there are more than a few holdouts, like Bill O’Reilly and the neocons, but the latter are increasingly isolated, and the former is increasingly irrelevant. What we are seeing, as the role of the “intelligence community” in basically leading a seditious conspiracy against a sitting President is revealed, is a complete switch in the political polarities in this country: what passes for the “left” has become the biggest advocate of the Surveillance State, and the rising populist right is coming to the hard-won conclusion that we are rapidly becoming a police state.

Ah, but wait! That’s not the whole story: bear with me for a while.

The material in “Vault 7” is extensive: it ranges from examining the ways in which a Samsung television set that is seemingly turned off can be– and no doubt has been – used to spy on the conversations and activities of a room’s occupants, to the various ways in which our spooks infiltrate and subvert common electronic devices, such as the I-Phone, in order to gather information. “Infected phones,” we are told in the introduction to the material, “can be instructed to send the CIA the user’s geolocation, audio and text communications as well as covertly activate the phone’s camera and microphone.” The CIA is even working on remotely controlling the electronic steering systems installed in cars – a perfect route to pulling off an assassination that looks like an “accident.” Not that the intelligence services of the “leader of the Free World” would ever consider such an act.

The massive infection of commonly used software and electronic devices leads to a major problem: proliferation. As these viruses and other invasive programs are unleashed on an unsuspecting public, they fall into the hands of a variety of bad actors: foreign governments, criminals, and teenagers on a lark (not necessarily in descending order of malevolence). This plague is being spread over the Internet by a veritable army of CIA hackers: “By the end of 2016,” WikiLeaks tells us, “the CIA’s hacking division, which formally falls under the agency’s Center for Cyber Intelligence (CCI), had over 5000 registered users and had produced more than a thousand hacking systems, trojans, viruses, and other ‘weaponized’ malware.” The inevitable end result: a world infected with so much malware that computers become almost useless – and this parlous condition is paid for by you, the American taxpayer.

This is, in effect, the cybernetic equivalent of the Iraq war – an invasion that led to such unintended consequences as the rise of ISIS, the devastation of Syria, and the empowerment of Iran. In short, a war that made us less safe.

One aspect of the Vault 7 data dump that’s drawing particular attention is the CIA’s Remote Devices Branch’s “Umbrage group,” which, we are told, “collects and maintains a substantial library of attack techniques ‘stolen’ from malware produced in other states including the Russian Federation.” The idea is to mask the Agency’s cyberwar operations by attempting to hide the unique forensic attributes of its techniques. The process of attribution, WikiLeaks explains, is “analogous to finding the same distinctive knife wound on multiple separate murder victims. The unique wounding style creates suspicion that a single murderer is responsible. As soon one murder in the set is solved then the other murders also find likely attribution.”

So how does the CIA hide its “fingerprints”?

It simply draws on computer code used by its adversaries – and not only Russia – and inserts it into its own handcrafted malware and other invasive programs, thus leaving Russian (or Chinese, or North Korean) fingerprints on the handiwork of CIA hackers.

Now you’ll recall that the attribution of the DNC/Podesta email hacks was “proved” by the DNC’s hired hands on the basis of the supposedlyunique characteristics of the programs used by the supposed Russian hackers. One of these alleged Russians even left behind the name of Felix Dzerzhinsky – founder of the Soviet KGB – embedded in the code, hardly the height of subtlety. So now we learn that the CIA has perfected the art of imitating its rivals, mimicking the Russians – or whomever – in a perfect setup for a “false flag” scenario.

After months of the nonstop campaign to demonize the Russians as “subverting our democracy” and supposedly throwing the election to Donald Trump by hacking the DNC and Podesta, a new possibility begins to emerge. I say “possibility” because, despite the craziness that is fast becoming the norm, there has got to be a limit to it – or does there?

No, I’m not suggesting the CIA hacked the DNC and poor hapless John Podesta. Yet others are suggesting something even more explosive.

In an appearance on Sean Hannity’s Fox News television program, retired Lt. Col. Tony Shaffer, a former senior intelligence officer, told the audience that he had heard from his intelligence contacts that retired NSA officials were responsible for hacking the DNC and Podesta, and then releasing the materials to WikiLeaks His co-guest, William Binney, a former NSA insider who was among the first to expose the extent of that agency’s surveillance of American citizens, agreed.

This is nothing new: Judge Andrew Napolitano said the same thing months ago. The alleged motivation was animus toward Mrs. Clinton.

Although “the Russians did it” is now the accepted conventional wisdom, which hardly anyone bothers to question anymore, the level of evidence proffered to support this conclusion has been laughably inadequate. And you’ll note that, although the CIA and the FBI, along with other intelligence agencies, advanced this hypothesis with “high confidence,” the NSA demurred, awarding it with only “moderate” confidence.

And one more thing: I found it extremely odd that, when the hacking of the DNC and John Podesta’s email was discovered, party officials refused to let the FBI and other law enforcement agencies examine either their server or Podesta’s devices. Instead, they gave it over to CrowdStrike, a private firm that regularly does business with the DNC. CrowdStrike then came out with the now-accepted analysis that it was a Russian job.

Could it be that the “explanation” for the hacking was determined in advance?

I don’t know the answer to that question. Nor do I necessarily buy Col. Shaffer’s thesis. What I’m saying is that it’s entirely possible – indeed, it is just as likely, given what we know now, as pinning the blame Vladimir Putin.

So what is the lesson of all this?

We have created a monster, a Deep State with such unchecked power, armed with such Orwellian technology, that it represents a clear and present danger to our constitutional republic. This threat is underscored not only by the latest WikiLeaks revelations, but also by the intelligence community’s intervention in our domestic politics, which has been documented in the headlines of the nation’s newspapers for the past few months.

This cancer has been allowed to grow, undiagnosed and unopposed, within the vitals of our government in the name of “national security.” Accelerated by our foreign policy of perpetual war, the national security bureaucracy has accumulated immense power, and our elected leaders have neglected to provide any oversight. Indeed, they are at its mercy.

The latest WikiLeaks revelations should be a wake-up call for all of us who want to preserve what’s left of our constitutionally-guaranteed liberties. Either we slay the monster or it will enslave us.