They Say They Want a Revolution: Ukrainians Take to the Streets 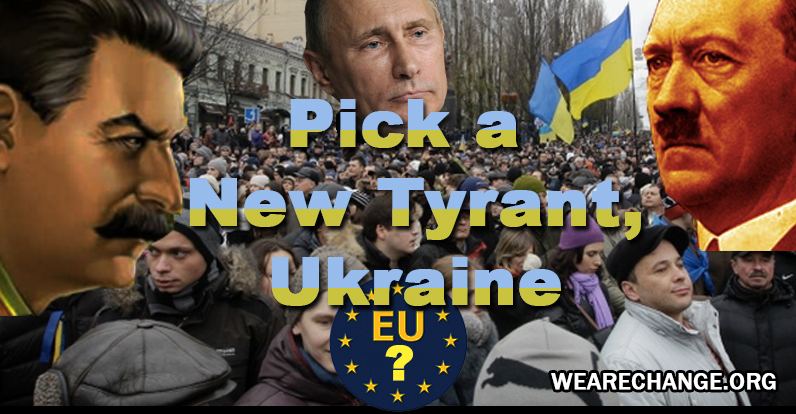 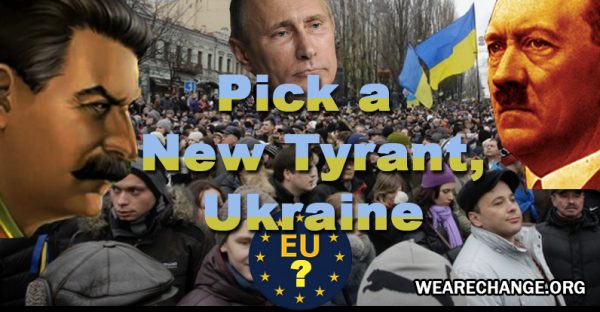 While Americans worried about shopping on Black Friday, 200,000 or more Ukrainians invaded and occupied the central plaza in their national capital, Kiev. They stood in protest against their president’s decision to discontinue the pursuit of associate status with the European Union (EU). Ukraine’s name means “borderland,” and the name fits today as the people struggle and clash over alliances with Russia on their east, and the nations of Europe, mainly to their west.

Russia is not simply a geographic neighbor. Many Ukrainians, especially in the east, speak Russian in preference to the nation’s own language, Ukrainian. They identify as Russians, not Ukrainians, and are happy to stay allied with Russia for trade and cultural exchanges. In Ukraine’s west, nationalistic sentiment is strong, and organized neo-Nazis can be found, who apparently would side with Hitler over Stalin were a rematch of World War Two to be played.

Ukrainians left the USSR in 1990, and have struggled since then to find their economic footing. In 2004, the people overthrew their government, with mass protests dubbed the “Orange Revolution,” a harbinger of other color revolutions that would soon play out in eastern European and middle eastern countries. They tossed out their newly-elected president, complaining of a rigged election, and replaced him with a man who was later allegedly poisoned on order of Russia’s current president, Vladimir Putin (though the case is still considered a mystery, or even a hoax). Things went from bad to worse, and they eventually brought the deposed Viktor Yanukovych, back; he holds the presidency today.

With the Ukrainian economy in free fall, and energy prices set higher by the Russians from whom they buy much of their fuel, many Ukrainians began to believe that an alliance with the EU was in their best economic interest, in fact the only hope for future generations to escape the shackles of the former USSR. However, Vladimir Putin doesn’t like this, and has put the screws on, alluding to much harsher trade terms with Ukraine should she ally herself with western nations. Russophiles in Ukraine claim that a pact with the EU will lead to financial oppression and cultural atrophy. They loathe the idea of Ukraine joining NATO.

Ukraine’s talks with the EU were going well, and Ukraine’s President Yanukovych was set to sign a deal that would give Ukrainians associate status with the EU, though not full rights such as freedom to work in other EU countries. But, he pulled the plug last week, and thus we see huge numbers of desperate Ukrainians creating a virtual shutdown of government by blocking access to government buildings with little more than their warmly-dressed bodies.

Protesters have been more than provocative, hurling incendiary devices and noxious gases at the police. Police have engaged in violence toward protesters, but in many cases have shown restraint we couldn’t expect in Washington, DC. A phalanx of officers about ten men deep stood impassively as anti-government protesters menaced them with a front-end loader. Other protesters in Kiev got the front-end loader to stand down, not the police.

On Dec. 3, the people demanded that parliament issue a vote of no-confidence in the president and his party’s leadership, with this demand supported by leaders of three opposing parties, including world heavyweight boxing champion Vitali Klitschko. The vote failed, and it’s business as usual in Ukraine, although under unusual conditions. The president, under considerable pressure, has promised to renew talks with the EU, which might or might not appease the acres of protesters who still occupy Kiev and prevent access to the workplace for much of the central government.

Keep an eye on Ukraine, whose fertile farmlands and folk traditions are still their own, even as countries to the east and west vie for a piece of their assets, soil, and the fruits of their labor. If the people effect a revolution and peaceably toss out their president and his party, you might just wonder why we don’t do that here. There comes a time in some countries when the fear of getting arrested or killed is overpowered by the fear that your country is going to hell, and you’ll go with it if you don’t stand up for it. You can’t buy a revolution cheaply, Black Friday, Cyber Monday, or otherwise.