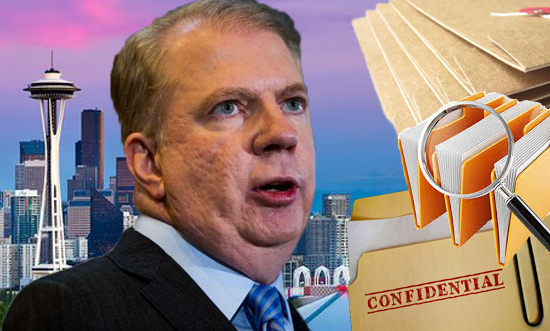 Democratic Seattle Mayor, Ed Murray, a staunch gay rights advocate and a champion of progressive causes has been accused of sexually abusing several boys back in the 1980’s.

The 46-year-old man, who was only referred to as the initials, “D.H.” in the lawsuit, claimed that Murray, “raped and molested,” him for several years in exchange for $10 to $20 payments.

The lawsuit stated that Murray abused D.H. spanning a time period of several years, beginning in 1986 when the man was a 15-year-old high-school dropout.

The suit included specific details about the sexual encounters the two are alleged to have had, as well as descriptions by D.H. of Murray’s genitals and body.

D.H.’s lawyers admitted that he had been convicted of, “various” drug charges and prostitution in 1990 during an undercover sting operation.

This wouldn’t be the first time that the Seattle mayor was accused.

The Seattle Times reported that two other men, Jeff Simpson and Lloyd Anderson, said they knew Murray when they were growing up in a Portland center for troubled children and later as teenagers. They accuse Murray of abusing them in the 1980’s when he was in his 20’s. Simpson made the claim as a teen in 1984, and talked with a social worker and detective at the time. No charges were filed.

The Times also revealed that it was aware of other allegations against Murray but chose not to report them:

“Both men raised the allegations a decade ago, with one making calls to reporters and Washington state lawmakers. They repeated the accusations in recent interviews with The Seattle Times, saying they would testify in court if needed.

Now, with the D.H. lawsuit, Murray faces a formal public accusation for the first time and details of the case bear similarities to the earlier allegations.

While The Seattle Times chose not to publish the 2008 allegations, the similarities between those claims and the new public case gave additional weight and relevance to the previous information.

Mayoral spokesman Jeff Reading’s statement acknowledged Simpson and Anderson’s accusations: “The two older accusations were promoted by extreme right-wing anti-gay activists,” in the midst of the marriage equality campaign and were thoroughly investigated and dismissed by both law enforcement authorities and the media.”

All three of Murray’s accusers have substantial criminal records.

Reading’s comments aren’t exactly true and accurate there’s a big difference between, “thoroughly investigated and dismissed,” and the Times’s position that it, “chose not to publish.”

In another column, the Times stated they attempted to kill the story in 2008 claiming that, “we felt we did not have enough information to publish these very serious accusations.”

The 1980’s documentary film, “Boys For Sale,” mentions centers for troubled children or foster care homes as a prolific place that elite pedophiles would use to traffic and exploit children.

Murray’s spokesperson, Jeff Reading, denied the claims and called the suit a, “shakedown effort,” that was timed coincidentally within weeks of the deadline for Murray to file for re-election.

“Mayor Murray has never engaged in an inappropriate relationship with any minor,” Reading said in the statement. “Mayor Murray will vigorously fight these allegations in court.”

However the man claims that he decided to come forward with his lawsuit after the death of his father, “prompted moments of reflection and introspection,” the suit read.

“These moments of reflection and awareness that Mr. Murray maintains a position of authority, prompted the filing of this lawsuit in an attempt at accountability and to hopefully give courage for other potential victims to come forward and speak out,” lawyers wrote in the suit.

D.H’s lawyers also noted that the suit would be downplayed as being politically motivated.

D.H. “believes the public has a right to full information when a trusted official exploits a child,” they wrote in the complaint.

The Seattle city council declined to comment on the accusations.

“There is a judicial process that will address the serious allegations that this situation has presented and we will respect that process and the rights of all parties involved,” Bruce Harrell said in a statement. “It is in our human nature to immediately want answers, but I ask we not cast aspersions to the parties involved before we have all the facts through the legal process. I am confident that through this process, truth and justice will prevail.”

Murray issued a statement publicly calling the allegations, “not true” and has refused to resign.

“Let me be clear: These allegations dating back to more than a period of 30 years are simply not true,” he said. “I will not back down now. I will continue to be mayor of this city. I will continue to run for re-election, and I plan to lead this city as we work our way through the wind and rain storm of this weekend as well as the many challenges we face going forward.”