#NoWarWithSyria: Meet The Lawmakers Who Oppose War On Syria 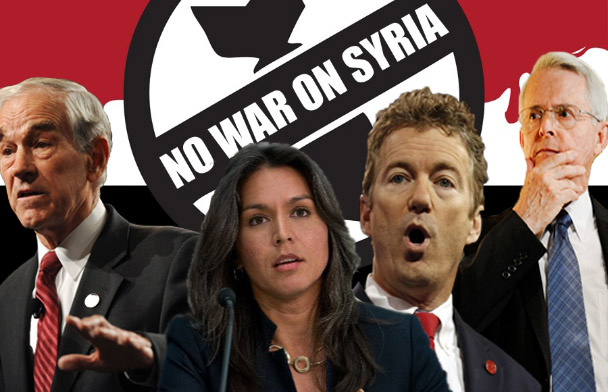 While the Neoconservatives and Neoliberals alike, now both flagrantly promote war in Syria, few U.S. representatives are in opposition to the insane plan of regime change in another middle eastern country, but those that do are boldly voicing their opinions about it, making sure their cries don’t fall on deaf ears.

Former Texas congressman Ron Paul, notably the first to speak out about the convenience of the chemical weapons attack in Syria, has called the recent attack into question.

Paul claimed on a broadcast of his show “The Liberty Report” that all signs pointed toward the attack in Syria being a false flag operation.

“Before this episode of possible gas exposure and who did what, things were going along reasonably well for the conditions,” Paul stated. “Trump said let the Syrians decide who should run their country, and peace talks were making out, and Al Qaeda and ISIS were on the run.”

Ron Paul’s son Rand Paul, has also claimed that Trump’s strike was, “not in the national interest,” of the country and was, “an inappropriate way to start a war,” and that President Trump should have sought approval from Congress before acting. Adding the 2001 Authorization for Use of Military Force (AUMF) after 911 couldn’t be applied to Syria and had nothing to do with Syria or its leader Bashar Al-Assad.

“Involving ourselves in civil wars throughout the world is really not the job of America’s foreign policy,” Paul said. “Some will say maybe this is an exception to the rule, and I hope, frankly, that this is an exception. That he won’t believe that we can actually solve the Syria war militarily.”

Senator Richard Black has also raised his own suspicions of the attack in a “tweet storm,” stating that ISIS had tricked U.S. President Donald Trump — something that We Are Change also expressed may be the case. Black even tweeted out a video of the infamous Retired 4-star U.S. Army General Wesley Clark whistleblowing the plan to invade 7 countries within 5 years which names – Iraq, Syria, Lebanon, Libya, Somalia, Sudan, and Iran.

Although, this plan largely failed surpassing its given time frame in the greater spectrum of things the plot is still in full swing to invade Syria.

Assad is about to defeat ISIS, so why would he suddenly gas women & children to infuriate America? Makes no sense. @realDonaldTrump

If we go into Syria we are entering WWIII based upon information provided by terrorists. If we topple Assad, we help ISIS. @realDonaldTrump

Saudi Arabia wants a pipeline to Turkey through Syria but Assad said no. This is the only way to get rid of Assad. https://t.co/gL00qby0L0

Black alleges that ISIS carried out the chemical weapons attack to force the U.S. to oust Assad to open a window for the Islamic State to take over the Syrian state.

Only way ISIS can defeat Pres. Assad is to draw U.S. into the war. What better way than stage an attack on women/children? @realDonaldTrump pic.twitter.com/bJa5xHvfbV

Hawaii congresswoman, Tulsi Gabbard, has expressed opposition to Trump’s strike and claims that Assad isn’t the only one who has chemical weapons. Gabbard has vehemently campaigned to stop funding the opposition of terrorist in the region even secretly meeting with Assad in January this year.

[RELATED: After Meeting with Assad, Tulsi Gabbard Calls on US to End Support for Terrorism]

“U.S. attacks on Syria won’t save children, rather will strengthen Al Qaeda’s attempts to overtake Syria, leading to more deaths and refugees,” she tweeted Friday in response to the missile attack.

US attacks on Syria won't save children, rather will strengthen al-Qaeda's attempts to overtake Syria, leading to more deaths and refugees.

“We need to learn from Iraq and Libya — wars that were propagated as necessary to relieve human suffering, but actually increased human suffering many times over,” she said in an email to The Hill.

“I and thousands of my brothers and sisters-in-arms went to war in Iraq based on false intelligence and lies from our leaders — our president, military and political leaders. We should have been skeptical then, and we weren’t,” she said. “The cost was thousands of American lives and trillions of dollars down the drain. What to speak of millions of non-American lives.”’

“No leader — of either party, pro or against military intervention — should let our President take us down the path to another regime change war without that debate.”

Gabbard further added that Trump “acted recklessly” and “without waiting for the collection of evidence from the scene of the chemical poisoning.”

“If President Assad is indeed guilty of this horrible chemical attack on innocent civilians, I will be the first to call for his prosecution and execution by the International Criminal Court,” Gabbard said. “However, because of our attack on Syria, this investigation may now not even be possible.”

Because of her anti-war stance and skepticism, the Democratic party has disowned the war veteran and stated they would fund someone to campaign against her to take her seat.

“This is a disgrace. Gabbard should not be in Congress,” Dean tweeted in response to Tanden.

Tanden claimed that Gabbard being “skeptical” that Assad’s regime carried out the chemical attacks and her meeting with a “dictator” was reason enough to remove her.

“People of Hawaii’s 2nd district – was it not enough for you that your rep met with a murderous dictator? Will this move you?” Tanden wrote.

People of Hawaii's 2nd district – was it not enough for you that your rep met with a murderous dictator? Will this move you?1 https://t.co/jbwGuZIJ6R

This is a disgrace. Gabbard should not be in Congress. https://t.co/yDTh43GZam

Gabbard fired back at her critics tweeting:

“Those who’ve declared Trump a habitual liar now vilify those refusing to blindly follow him into another regime change war. Hypocrisy.”

Those who've declared Trump a habitual liar now vilify those refusing to blindly follow him into another regime change war. Hypocrisy.

Other U.S. lawmakers who have expressed their skepticism or outrage over the attack without congressional approval include:

Have we still not learned from the disasters in Iraq and Libya? Now Syria? Every time we have attacked since 2001, terrorism has spread.

What is the strategy here? What is our end goal? Why did we have to strike today? This is not how you conduct a military strike. https://t.co/owJc9Nz8GC

I Implore @realDonaldTrump to bring forth a new AUMF before Congress before we are embroiled in an endless, aimless war.

This is an act of war. Congress needs to come back into session & hold a debate. Anything less is an abdication of our responsibility. https://t.co/GvHML3ByeI

My statement on tonight's military strikes in Syria: pic.twitter.com/q99kWULpKg

Airstrikes are an act of war. Atrocities in Syria cannot justify departure from Constitution, which vests in Congress power to commence war.

We will leave you to ponder with one last tweet from Senator Richard Black tweeting a thought provoking question, “who are the good guys in Syria that will lead if Assad falls from power?”

Who are the "good guys" who will take over in Syria if Assad falls? @realDonaldTrump