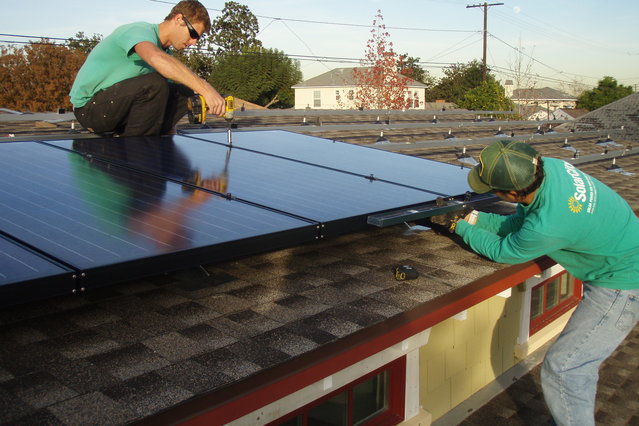 If you ask the people who run America’s electric utilities what keeps them up at night, a surprising number will say solar power. Specifically, rooftop solar.

That seems bizarre at first. Solar power provides just 0.4 percent of electricity in the United States — a minuscule amount. Why would anyone care?

But utilities see things differently. As solar technology gets dramatically cheaper, tens of thousands of Americans are putting photovoltaic panels up on their roofs, generating their own power. At the same time, 43 states and Washington DC have “net metering” laws that allow solar-powered households to sell their excess electricity back to the grid at retail prices.

That’s a genuine problem for utilities. All these solar households are now buying less and less electricity, but the utilities still have to manage the costs of connecting them to the grid. Indeed, a new study from Lawrence Berkeley National Laboratory argues that, without policy changes, this trend could soon put utilities in dire financial straits. If rooftop solar were to grab 10 percent of the market over the next decade, utility earnings could decline as much as 41 percent.

To avoid that fate, many utilities are now pushing for reforms that would at least slow the breakneck growth of rooftop solar — say, by scaling back those “net metering” laws. And that’s opened up a war with many fronts. There are solar advocates who’d prefer not to see any changes. There are conservative groups like the American Legislative Exchange Council (ALEC) pushing to pare back solar subsidies. And there are even Tea Party groups now defending solar. Meanwhile, state regulators are struggling to find compromises that would both allow solar to expand but also ensure that there’s enough money to maintain the existing grid.

Battles over solar are now raging in more than a dozen states — from Arizona toUtah to Wisconsin to Georgia. (They’re also flaring up abroad, in countries like Germany and Australia). And the debate raises some legitimately hard questions about how best to deal with a new energy technology. Here’s a broad overview:

How cheap solar could lead to a utility “death spiral”

Solar panels are still a niche product. But the cost of solar rooftop systems has been plummeting in recent years (see chart). Firms like SolarCity will now install solar systems at no upfront cost to customers who can then make monthly payments. Plus, there’s a 30 percent federal tax credit for residential solar systems until the end of 2016.

IF ROOFTOP SOLAR REACHED 10% OF THE MARKET, UTILITY EARNINGS COULD FALL BY 8% TO 41%

So even though solar provides just 0.4 percent of America’s electricity, it’s growing at a shocking rate. Rooftop solar generation has roughly tripledsince 2010. By some estimates, a new solar system is installed every four minutes in the United States.

To electric utilities, this poses a dilemma. As rooftop solar becomes more popular, people will buy less and less electricity from their local power company. But utilities still have plenty of fixed costs for things like maintaining the grid. So, in response, those utilities will eventually have to raise rates on everyone else. Trouble is, those higher electricity rates could spur even more people to install their own solar rooftop panels to save money. Cue the death spiral.

Sound far-fetched? This was the doomsday scenario laid out by the Edison Electric Institute, an industry trade group, back in January 2013. Even a relatively modest increase in rooftop solar power could cause havoc. David Crane, CEO of NRG Energy, has called these trends “a mortal threat to the existing utility system.” (Some utilities also have their own solar plants, but that doesn’t pose a threat to their business model.)

One recent study from Lawrence Berkeley National Laboratory found that some utilities could face serious financial trouble in the coming decade. Distributed solar now makes up nearly 2 percent of retail sales in some areas. If solar penetration reaches just 2.5 percent, shareholder earnings for some utilities could fall an estimated 4 percent. (Electricity prices, meanwhile, would rise just 0.1 to 0.2 percent.)

That’s just the beginning. If the penetration of distributed solar reached as high as 10 percent — an admittedly aggressive scenario — a typical utility in the Southwest could see its earnings drop 5 percent to 13 percent, while a typical utility in the Northeast could see its earnings decline 6 percent to 41 percent. This is similar to what’s happened in Germany, where distributed solarhas halved the market value of some utilities.

The LBNL study did argue that there are policies that might help utilities recoup their lost revenues. Some states are trying to modify regulations so that utility profits are no longer wholly dependent on how many power plants they build and how much electricity they sell — a process known as “decoupling.” But whether this softens the blow really depends on the fine details.

Utilities are now pushing to scale back solar subsidies 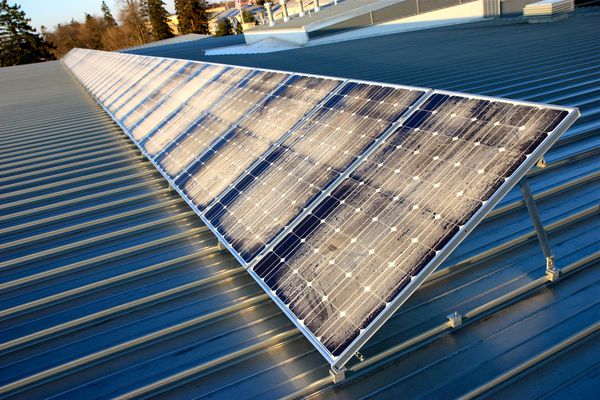 The potential disruptions caused by solar power have triggered a number of fierce policy disputes at the state level.

Some of the biggest fights are over “net metering” policies, found in 43 states and DC, that essentially require utilities to buy excess rooftop solar power from homes and businesses at retail prices. (These retail prices are higher than the wholesale prices that utilities typically pay for electricity generation.)

Electric utilities argue that these policies have become far too unwieldy. After all, these new solar-powered homes and businesses are all still connected to the grid (not least because they still need electricity from traditional power plants when the sun isn’t shining). But the utility is getting less money from these customers to maintain and repair that grid.

As such, utilities argue that they should be allowed to charge rooftop solar owners a maintenance or connection fee of some sort. Alternatively, in some states, utilities have proposed reducing the price paid to these households for their excess solar electricity. 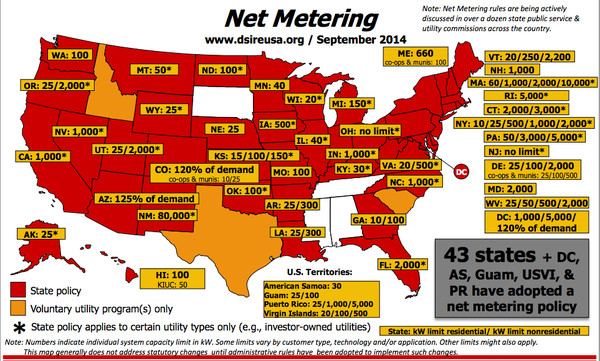 Solar advocates, for their part, counter that solar power provides a wide variety of ancillary benefits — it doesn’t pollute, it helps address global warming, and it provides a handy source of peak power on hot days when A/C use surges. So, they say, solar should get some sort of subsidy for this, and net metering makes sense.

The first big battle over net metering came back in 2013, when Arizona Public Service proposed a new $50 monthly fee for all households with rooftop solar. That sparked a huge backlash from solar proponents, and regulators eventually pared the fee back to $5 per month.

Similar disputes are spreading to more and more states. As Zack Colman recently reported in theWashington Examiner, measures have now been filed in 20 states to either scale back or eliminate net metering laws. In Wisconsin, for instance, the largest utility in the state, We Energies, has proposed reducing the price paid to rooftop solar owners for their electricity, as well as charging all homeowners a higher price for connecting to the grid.

Some of these rollback efforts have been backed by the American Legislative Exchange Council (ALEC), a conservative group that has drafted “model legislation” to weaken net metering. Their argument? The growth of rooftop solar will force utilities to raise rates on the rest of us in order to maintain the grid.

Yet policies to moderate the growth of solar can be motivated by a variety of concerns — it’s not just a conservative plot. On Hawaii’s Oahu island, for instance, anyone who wants to install solar panels on their roofs now has to get permission from the local utility, which argues that the current grid can’t handle the strain. In Pennsylvania, utilities want to limit how much solar power a homeowner can install on his or her roof to 110 percent of what the house needs in a year, so as to limit excessive profiting off solar panels.

Some Tea Party groups have taken a pro-solar stance 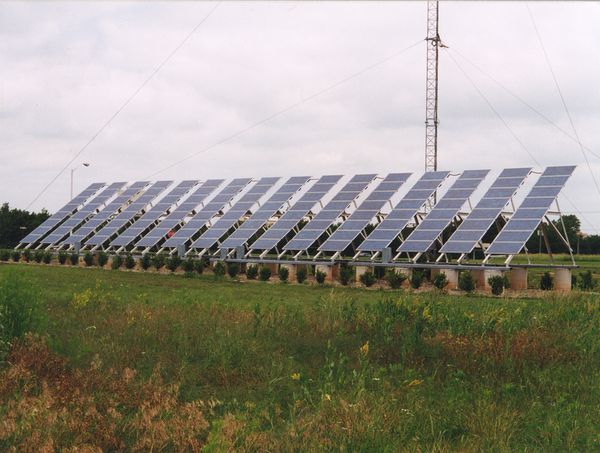 Battelle researchers are currently using a solar array at Tinker Air Force Base in Oklahoma City to test a new power converter that easily integrates many DC sources into the power system. (Pacific Northwest National Laboratory/Flickr)

The debate over solar has also created some surprising tensions among conservatives. On the one hand, right-wing groups like ALEC are opposed to the heavy subsidies given to solar power by Congress and states. But another subset of conservatives have begun to view solar power more favorably — and oppose efforts by states to restrict it or impose new fees.

‘SOLAR EMPOWERS THE CONSUMER,’ SAID A MEMBER OF THE GREEN TEA COALITION

Case in point: Earlier this year in Oklahoma, the legislature passed a bill that would charge rooftop solar owners more for the electricity they sell back to the grid. This bill quickly attracted the ire of conservative group TUSK, which stands for “Tell Utilities Solar Won’t Be Killed” and is led by Barry Goldwater, Jr.(See Slate‘s Josh Voorhees for the full Oklahoma story.)

TUSK, for its part, has argued that rooftop solar offers homeowners greater energy choice and should be valued by conservatives. “Monopoly utilities want to extinguish the independent rooftop solar market in America to protect their socialist control of how we get our electricity,” its website notes. “They have engaged in class warfare and tried to sabotage net metering, a billing method that gives individual homeowners fair credit for power produced on their own rooftops.”

Similar conservative splits are now showing up elsewhere. In Georgia, the Green Tea Coalition — a Tea Party offshoot — is pushing for policies that would allow homeowners to buy solar systems from third parties (something that Georgia restricts). “Solar empowers the consumer and the individual,” Debbie Dooley of the Green Tea Coalition explained to Midwest Energy News. “These giant monopolies want to take away that consumer choice unless they can control it.”

Is there a possible compromise on solar power? 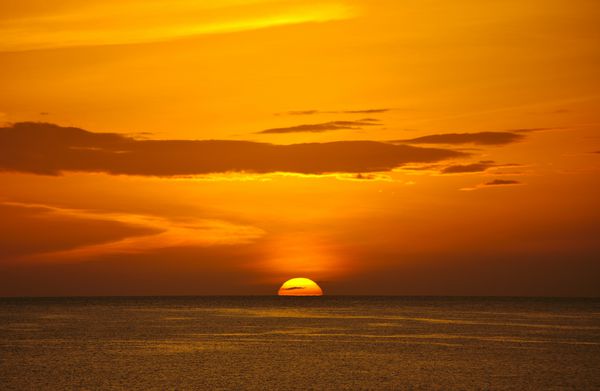 Does this setting sun represent compromise over solar policies? Sure, why not? (Kevin Dinkel/Flickr)

In the meantime, some states are trying to find a balance here, mulling over policies that both promote solar power but don’t leave utilities struggling to maintain the grid.

FOR SOLAR TO KEEP GROWING, COUNTRIES MAY HAVE TO FIGURE OUT A WORKABLE COMPROMISE

Minnesota, for one, has put forward a “value of solar” policy, in which regulators determine a “fair value” for electricity generated by rooftop solar panels — taking into account both their environmental benefits and the costs they impose on the grid — and then letting utilities buy electricity at that price (rather than buying it at the retail electricity rate, which can fluctuate over time).

Still, even this policy has created riftsamong solar proponents, with some arguing that current net metering policies work just fine. (One key difference? Under net metering, homes only sell the electricity they don’t need back to the grid, whereas under “value of solar” policies, they have to sell all of it to the utility.)

If solar is to keep growing, though, regulators will ultimately have to figure out a workable compromise here. Indeed, a recent report from the International Energy Agency argued that the success of solar would depend on policies that “facilitate distributed [solar photovoltaic] generation while ensuring [transmission and distribution] grid cost recovery.”

The issue’s only likely to become more contentious as solar power keeps growing — and some experts are already suggest that utilities may be forced to make more drastic changes to their business model. See, for instance, this recent post by Matt Lehrman and Peter Bronski of the Rocky Mountain Institute on how radical changes to the old electricity-pricing model could be the best way to resolve this debate.