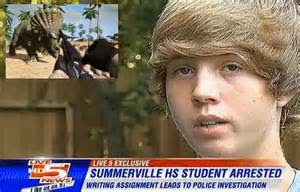 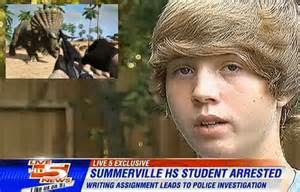 In the aftermath of school shootings by psychiatric drug users and the creation of fake or false flag shootings within schools, school administrators and local police have gone to the other extreme. The knee-jerk responses completely bypass valid questions such as “were the shooters on psych meds, or did this really happen as reported?”

Instead of seeking answers and questioning the incidents and their reports, excessively clamping down on security and reporting innocent behavior as suspicious has now reached the point of having children tazed or taken into custody, as in jailed, for absurdly harmless actions.

A recent example of this politically correct zeal occurred in Summerville, South Carolina. The victim of this zeal was 16-year-old Alex Stone. He and his classmates at Summerville High School were given an assignment to write a little about themselves and make up Facebook-type statuses. This rather lame creative writing assignment was given early in the school year.

So a young and perhaps flippant Alex said he wrote, “I killed my neighbor’s pet dinosaur, and, then, in the next status I said I bought the gun to take care of the business.” Well, the teacher freaked on the “get a gun to take care of business” part and notified the police.

The “serve and protect” squad arrived and searched Alex’s book bag and locker to find no guns or dead dinosaurs. According to police, Alex became “irate” while insisting to school officials that it was just a joke. Then he was handcuffed for disorderly contact and taken away for “disturbing schools,” local CBS affiliate Live 5 News reported.

Police Captain Jon Rogers seemed irate himself when he asserted, “The information that is being reported is grossly incorrect in reference to what led to the juvenile being charged. The charges do not stem from anything involving a dinosaur or writing assignment, but the student’s conduct.”

There was no attempt from school officials at getting an explanation from Alex, nor was anything mentioned to Alex’s mother, Karen Gray.

A site that focuses on egregious police actions has been criticized for being a little too heavy-handed against law enforcement, but there has to be another point of view, as the police state has encroached into even elementary schools. That site has 19 even more egregious examples of police activities in schools.

Maybe the strategy is to indoctrinate the kids and get them used to the increased police state. Or maybe it’s just the same basic nonsense of police versus youth, especially if they seem “disrespectful,” an interaction that’s gone wild with the “legitimacy” of preventing violent episodes of random shootings, terrorism and so on.

But what about those psychotropic drugs that are being foisted on school kids? Oh yeah, right, that’s medicine.