‘We Have Something in Common’: Trump Jokes With Merkel About Obama Wiretapping (VIDEO) 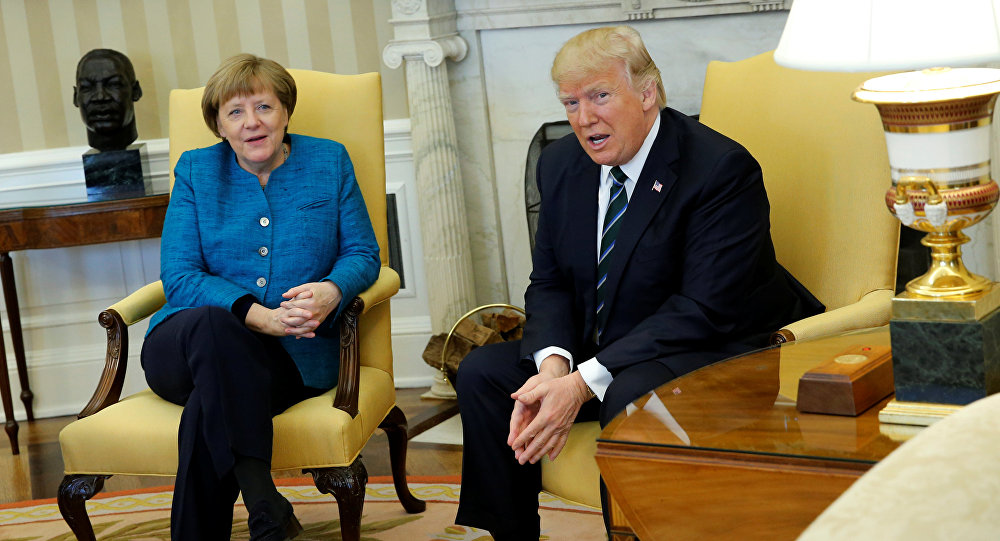 President Donald Trump held his first meeting with German Chancellor Angela Merkel at the White House on Friday, and staged a joint press conference shortly after.

Merkel's reaction when @realDonaldTrump makes that wiretapping joke is something (A+ cut by @sts10) pic.twitter.com/7jhJJwudAS

When asked by a reporter about claims that Obama wiretapped Trump Tower, the president gestured towards the German leader and said, “at least we have something in common, perhaps.”

In 2010, the National Security Agency monitored Merkel’s cellphone with direct authorization by President Barack Obama. After Merkel found out about the wiretap, she placed a “strongly worded” call to Obama, calling his actions “totally unacceptable, if true.”

“This would be a grave breach of trust,” Merkel said through her spokesman Steffen Seibert at the time. “Such practices must immediately be put to a stop.”

The two leaders both described their “working lunch” meeting as “very good,” and when asked by reporters if they discussed NATO, Trump responded that they “discussed many things.”

At the press conference, which began nearly an hour late, Trump praised the leadership of Chancellor Merkel, saying that the two nations must work together to “defeat radical Islamic terrorism” and Daesh.

“Immigration is a privilege not a right,” Trump said, “and the safety of our citizens must always come first.”

For her part, Merkel opened her remarks by saying that it is always better to talk to one another, instead of talking about one another.

Asked by a reporter if she approves of Trump’s style, Merkel said that she had received a warm welcome, and that the two leaders had tried to reach a compromise on issues where they disagree.

“Sometimes it’s difficult to find compromise, but that is what we have been elected for,” Merkel said.

During his presidential campaign, Trump harshly criticized Merkel for her liberal policies on accepting refugees, saying that she is “ruining Germany.”

It was expected that the duo would also discuss Russia, and during the press conference Trump stated that the two nations will work together to come up with a plan for peace regarding Ukraine.

“The president will be very interested in hearing the chancellor’s views on her experience interacting with Putin,” a senior administration official told reporters.

The meeting was originally scheduled to take place on Tuesday, but had to be postponed due to the snow storm that hit the east coast. It was Merkel’s first visit to the US in two years.