Steve Bannon is Out – What You Really Need To Know 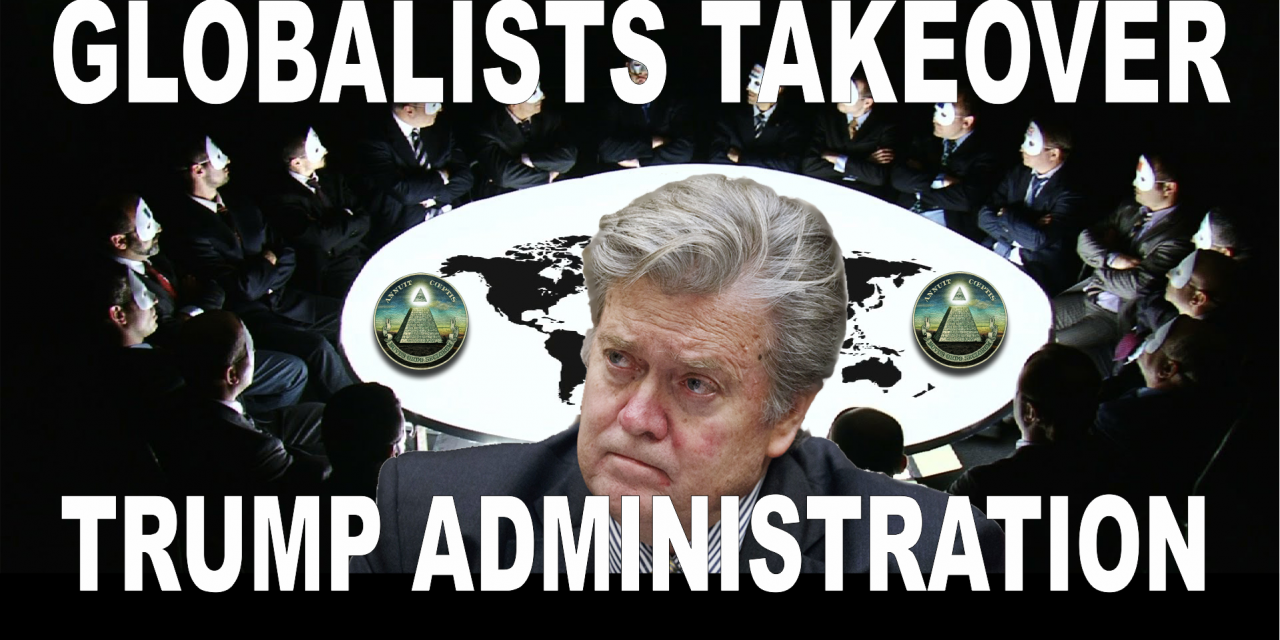 Hey, Luke Rudkowski here from WeAreChange to discuss the breaking news about the dismissal of Steve Bannon from the White House.

To talk about these latest developments, I have a guest Lee Stranahan who was the former lead investigative journalist at Breitbart. Lee was originally hired by Steve Bannon himself and now works at ThePopulist. 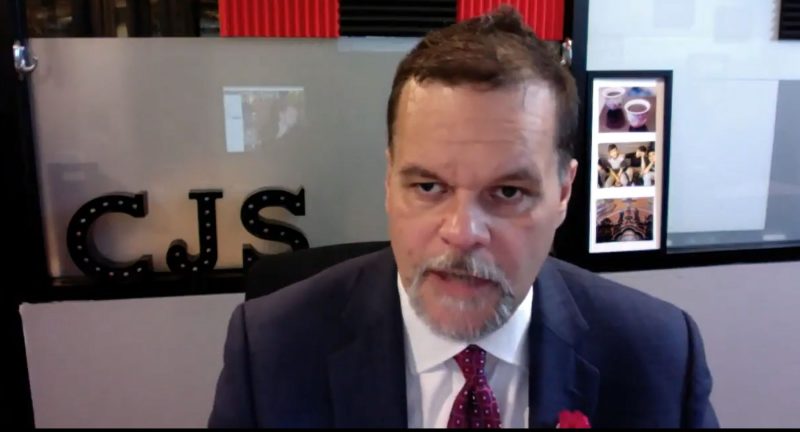 I wanted to bring Lee on to talk about what is happening. There is a lot of speculation from the left, and the mainstream media are claiming that Trump was afraid of Bannon. That Bannon was pulling all the strings at the White House and that Trump was scared to get rid of him.

The alternative media is saying that Bannon was fighting the deep state and these internal conflicts led to his removal.

Lee, you know Bannon better than anyone can you tell us about what just happened, what happened to Steve Bannon?

Lee Stranahan: Luke let’s discuss the ideas here, as you and your audience know there has been a wave of anti-elitism building in this country for years. We saw that during the election with both Trump and Sanders having the biggest crowds. They were the anti-oligarchy candidates. More and more Americans have realized that they are being lied to by the mainstream media. Bannon had his pulse on this the same just as you and I have. A lot of us saw this coming, we all saw the same problems.

When you take on the establishment, do you think they are going to give up their power and money voluntarily? No way that is going to happen. So they decided to co-opt Trump by making friends with him. They got to Trump through his family and installed people like Gary Cohn, Dina Powell, and H.R. McMaster. I see this as a battle of ideas. On one shoulder he had the establishment, on the other he had people like Bannon, Sebastian Gorka, and Stephen Miller. The globalists figured out how to get to Trump, and they have been trying to get Bannon out.

So how did they do it, well they know that Trump doesn’t like it when someone takes credit, so they put Steve Bannon on the cover of Time magazine. 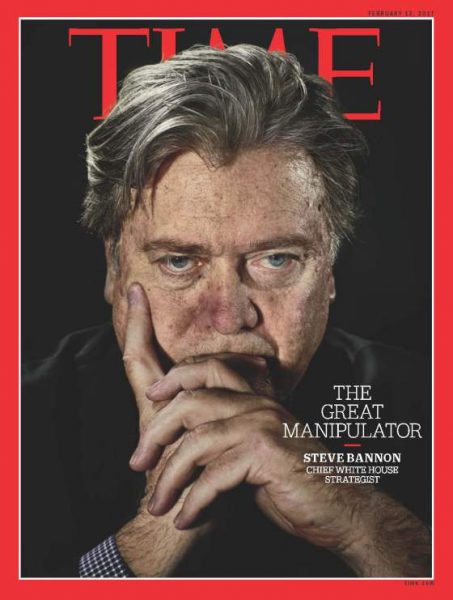 It’s a classic psy-op trick if they can stir up problems within an organization they can take it over. That’s exactly what they did.

This has been coming for awhile, and I am very happy about this because they didn’t think about what would happen if he left. Steve is now unleashed to speak his mind and carry forward the populist message.

Luke: We are seeing initial reports that say “that Bannon is going to war for Trump” in the media realm. What do you think of Trump’s base? A lot of people saw him as a champion of conservative populism and Trumps closest advisor. 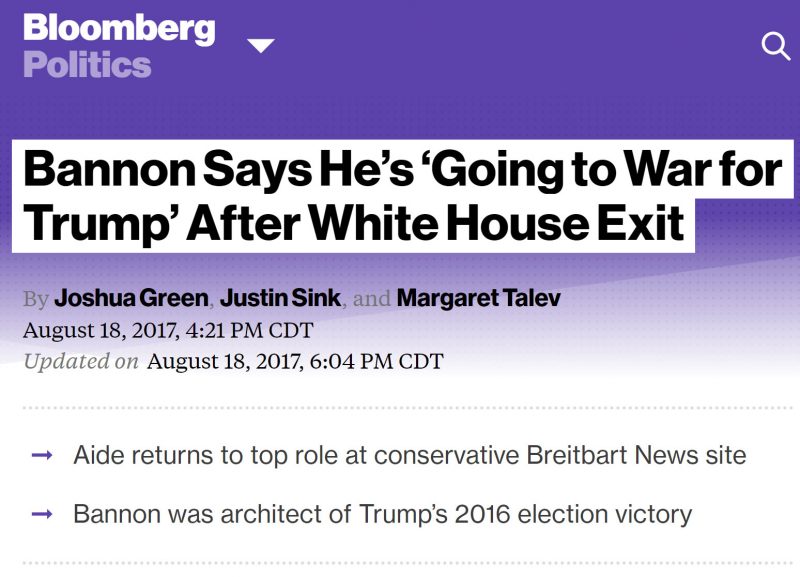 The architect that got him the election. People think that this is a turn towards a total globalist agenda, moving away from that nationalist perspective. Do you see it that way since Trump has been called both a nationalist and a globalist at the same time?

Lee: I think this is awesome, they no longer have Steve to kick around anymore. How is this going to go over? If Trump went to a rally and announced Bannon’s dismissal, he would get booed. He needs to hear that. A house divided against itself can’t stand, well it’s not divided anymore he’s gone. Now the globalists own the agenda and good luck with that. The people that supported Trump hate your guts.

The first thing that’s happening is there was a Security Council meeting today about Afghanistan. If you ask Trump supporters if they want more troops in Afghanistan, eighty percent would say they don’t. Look at what Bannon said about North Korea. He said it’s too late for a military solution since no solution exists that doesn’t involve millions of dead civilians in the first half hour. Ask anyone to explain a scenario where a lot of civilians aren’t killed immediately; there isn’t one. The media wants to make it a soap opera about personalities, and they are used to dealing with sheep. Trump supporters are not sheep, they all realize that there is a real problem with elitism.

Bannon understands that getting taxed differently on income from investments as opposed to income from employment means that billionaires can invest their money right and never pay taxes on it. That’s messed up, and Bannon gets that.

Luke: Trump did surround himself with a lot of Goldman Sach’s and military-industrial complex people and people from DynCorp. What do you think is happening inside the White House, we’ve seen Reince Priebus, Scaramucci and now Bannon all leave. People are pointing out that he is only replacing and repealing his staff instead of Obamacare. What do you think is happening? Is this some game by Donald Trump or has he been completely taken over by these elites?

Lee: It’s clear and provable that he has been taken over. If you were trying to get to Trump strategically, there are three things you know about him. Number one if you hit him he will hit back ten times harder. Number two he likes flattery, you saw that when he went to Saudi Arabia and they gave him a medal. 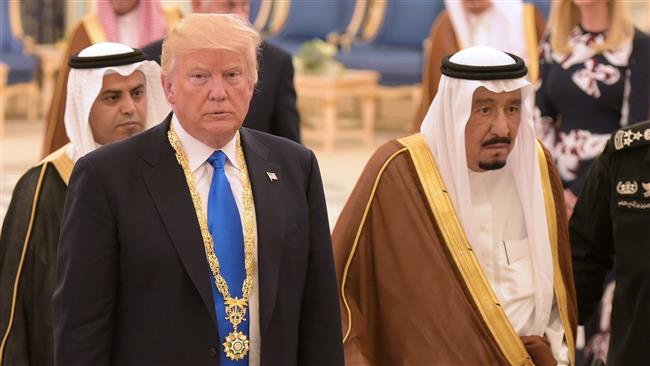 Luke: You could see that in the private conversations with the Prime Minister of Australia and the President of Mexico. That was very important for him.

Lee: Yes, and the last thing about Trump is that he loves his family. Ivanka Trump is beautiful and intelligent; she is a New York liberal. She is the spoiled child of a billionaire, that’s who she is. Her friends are Chelsea Clinton, Huma Abedin, and this New York social circle. Jared Kushner is, in my opinion, a political opportunist. 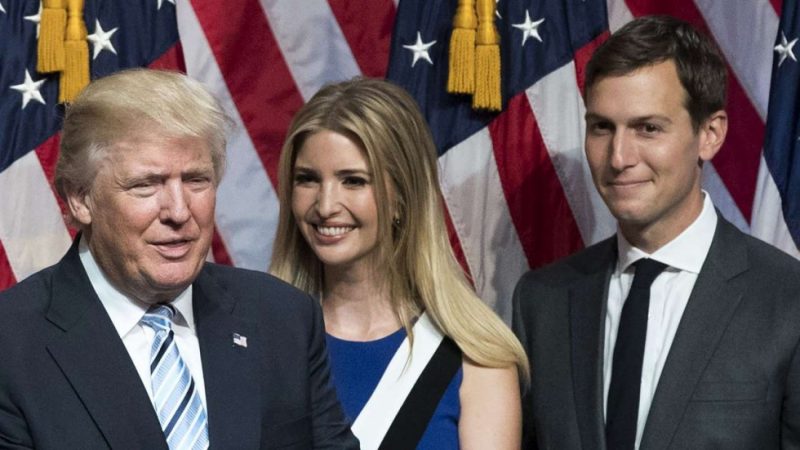 We saw this with EB-5 visa program and China where his family is making money off of their Trump association. Remember the meeting with the Saudis where Kushner picked up the phone to Lockheed Martin to get a better deal. He’s a player. The way they got to Trump is through his family.

All of them came in through Kushner. These are people that have done business with George Soros, now whatever you think of Soro’s he is not a Trump fan, he’s funding the movement to impeach Trump. Why surround yourself with people who have been in business with Soros. Kushner had a 250 million dollar line of credit with Soros.

Mr. Kushner co-founded Cadre in 2014 with his brother Joshua and Ryan Williams, a 29-year-old friend and former employee of Kushner Cos., the family-controlled business that Mr. Kushner ran until recently. Cadre markets properties to prospective investors, who can put their money into specific buildings or into an investment fund run by Cadre, which collects fees on each deal.

To get off the ground, Cadre turned to a Goldman Sachs fund and a number of high-profile investors … Cadre also secured a $250 million line of credit from the family office of George Soros, a top Democratic donor whom Mr. Trump criticized during his presidential campaign, the people close to the company said. Mr. Soros’s family office is also an investor in Cadre.

Why go into business, why surround yourself with these people. I think the lesson here is watching how they co-opt you, what they did to Trump they would have done to Bernie. They already did it to Obama. People need to be aware of how these institutions will co-opt you. It’s still early in the Trump administration, and I think in a few months Trump will realize that he is surrounded by snakes. If he doesn’t get it, his supporters will let him know.

Luke: Hopefully there are no new wars started, and Afghanistan doesn’t get re-invaded. I appreciate your perspective on this, what do you think the mainstream media will do now that Bannon is gone? What do you think Bannon will do?

Lee: They are saying that he may be coming back to Breitbart, which would be great. Bannon being back is a good thing because Breitbart was getting so cowardly that I had to quit. 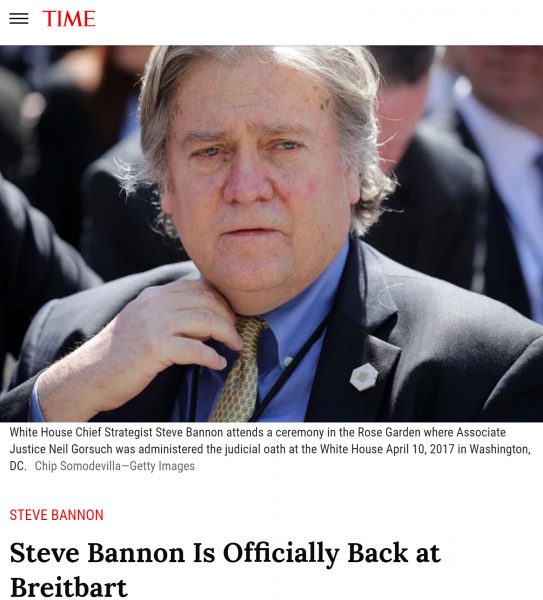 It’s very interesting that Breitbart didn’t get the scoop on it. If he didn’t go back to Breitbart, he was going to go back to media someplace. He wasn’t going to retire.

Luke: We know the real power is in the media we have seen the ramifications. The things that they can accomplish with often just outright lies and how powerful that institution is. Lee, I want to thank you for your perspective. Though it was pinpoint dead-on. Where can people find out more about you, what’s your website and can you tell us where people can find you.

Lee: The big one is ThePopulist. I do a lot of live video with Periscope so you can go to Stranahan which is my Twitter account. I also have a citizen journalism school, and I host a radio show five days a week on radio Sputnik. It’s called Fault Lines. Garland Nixon and I have been talking about these issues for weeks.

Luke: Thank you so much for being on today’s broadcast. If you appreciate today’s show, please like and subscribe. Don’t forget to check out wearechange.org and our donation page through our main website. Also please subscribe to our mailing list because everyone is getting hit hard on YouTube especially when you release information that goes against the status quo and the establishment lies.

Thank you guys so much.