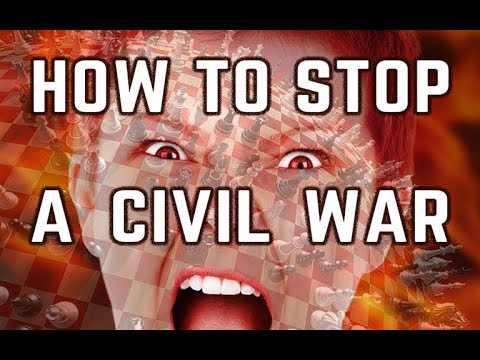 In his latest video, Luke discusses how difficult it has been to watch the infighting that is occurring and the responses that media have made to the Charlottesville situation.

I have been following closely the response to Charlottesville, and sadly the situation is escalating and looks like it will get a lot worse before it gets any better. Leading to what many are speculating will be an all-out civil war in the United States.

I want to talk about some of the important developments that happened after Charlottesville and the reasons why I see the situation becoming worse. I to give you an overall perspective of why this happened and how this situation will only deteriorate further.

Today is August 16th, 2017 a day where there was a memorial held for Heather Heyer, the 32-year-old innocent woman that was murdered while protesting at a white nationalist rally in Charlottesville Virginia. 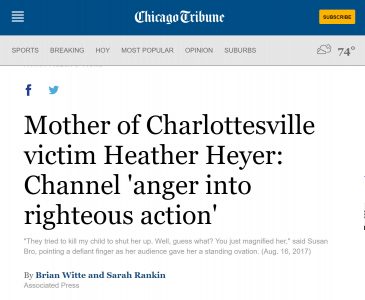 A very emotional day where Heather’s mother came out and said today that she wants her daughter’s death not to silence her daughter but to magnify her and to help channel the anger that’s happening right now into righteous action.

There has been a very strong reaction to what happened in Charlottesville. 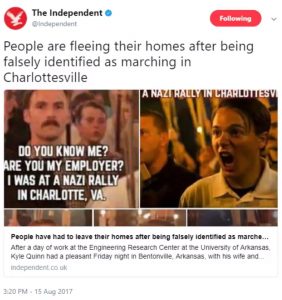 Many people are denouncing and attacking Donald Trump after his latest comments on the incident. People are even condemning various hair style’s associated with the alt-right. Others are being forced to flee their homes after being falsely identified as marching. 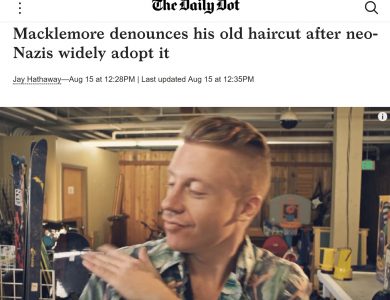 In Charlottesville Confederate statues and monuments are being torn down all around the country either at the hands of protesters or by local governments who do it after midnight to avoid any further violence and problems in their Cities. 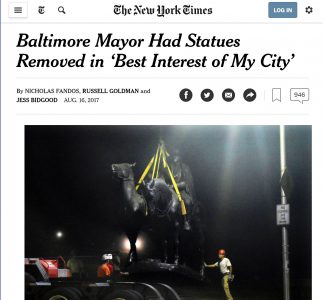 There’s even an incident where a man had five masked anti-Fa members outside of his home attack and stab him. In spite of the fact that he strongly disavowed white supremacy the attackers still labeled him a Nazi sympathizer for not denouncing it enough. 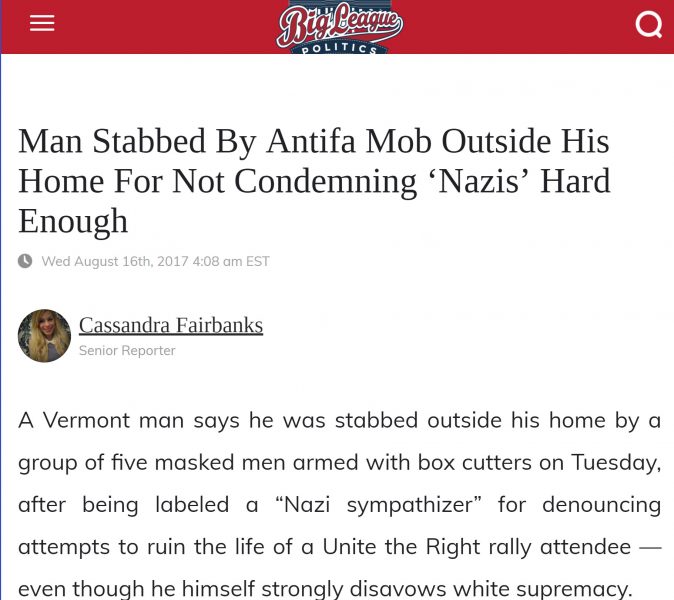 We see a very committed reaction by the left. A lot of people are missing the main point, the fact that for months the anti-Fa which are considered to be far left and the alt-right which is considered the far right have been growing in numbers and opposition to each other.

I think people miss the fact this is a cycle that has been engulfing both sides and emboldening them for some months now. This is pushing people to the extremes where they are being murdered in the streets. This extremism looks like it won’t end anytime soon. Many people have decided to direct their anger against Donald Trump because of the situation, even though Donald Trump has condemned violence on both sides. He even called out the alt left and white supremacy and Nazis at the same time, but many people see that as disingenuous. All because someone from the right killed someone from the left. It doesn’t help the situation that Donald Trump and other alt-right figures and alt-left figures talking generalizations when it comes to major events that benefit their political side. 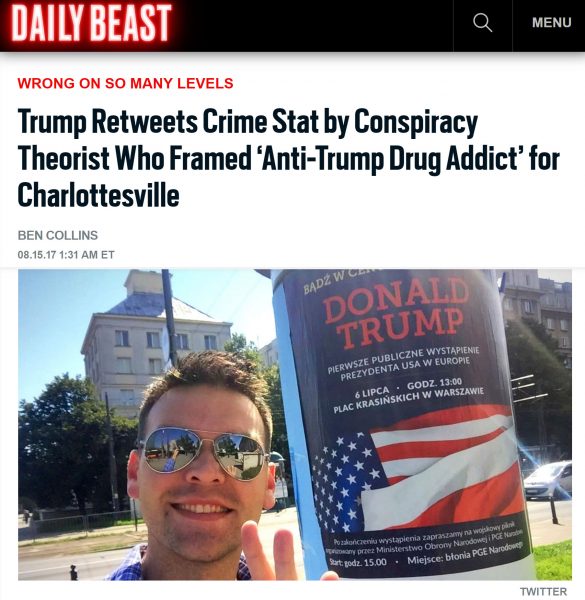 For those people on the right to sometimes build up completely fabricated stories like sensationalizing and claiming that the West is going to die any day now. Highlighting issues from a very biased perspective. Pushing an obvious ideology of scaring the crap out of people. Manipulating the truth to push their viewpoint. Telling people how they are under direct threat every single day. Not taking any responsibility for it while still tweeting out fake news. From my perspective sadly caring more about their career either as a politician or media pundit than the actual well-being of the people of this country. Creating a huge disservice that divides people even more. One that concentrates on our differences never admits to any faults and progresses us towards the current dismal situation that we’re all involved in right now

They’re not the only ones doing. It’s important to understand here that it’s what the mainstream media does as well. Fox News recently labeling pro-Trump supporter Jack Posobiec as an “ally of Richard Spencer” when in reality the two have very different political ideologies, they have publicly fought before. 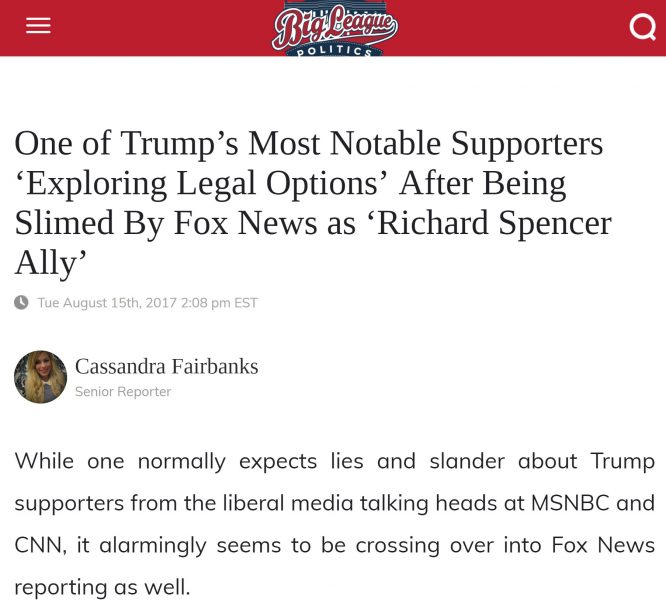 CNN also said that “white nationals were planning nine rallies nationwide just this weekend alone.” One of the rallies that they said was supposed to be a white nationalist rally was a “March on Google” which was partly organized by John Posobiec but had nothing to do with white supremacy at all. 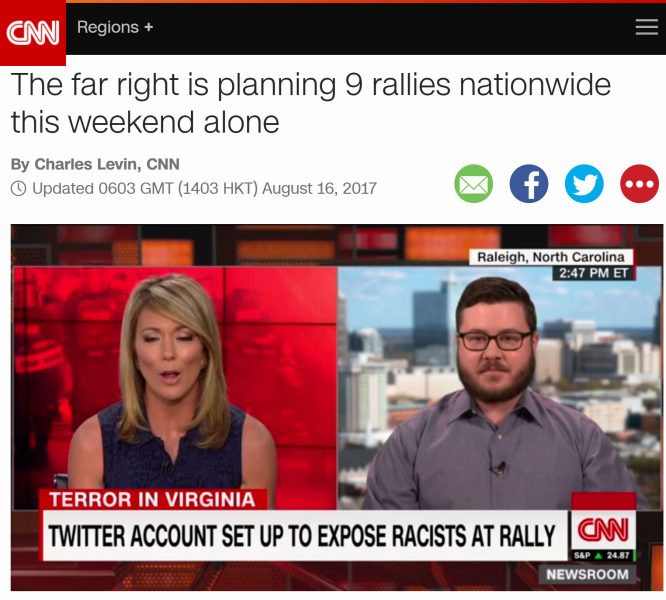 We have to ask ourselves why is this weaponized disinformation being used against us? There are many factors but one is simply that fear sells and has led to the current climate that we’re all in right now. It is outrageous titles and headlines that spark fear and anger. I have omitted information that shows a clear bias that is more exciting rather than accurate. Stories pushed both by the mainstream media and pro alt-media that are more profitable.

If you’ve been watching any of the mainstream media, you could see their focus and direction on getting you angry. The same is being done by the elements of the new media mostly of which have predominantly been pro Trump. 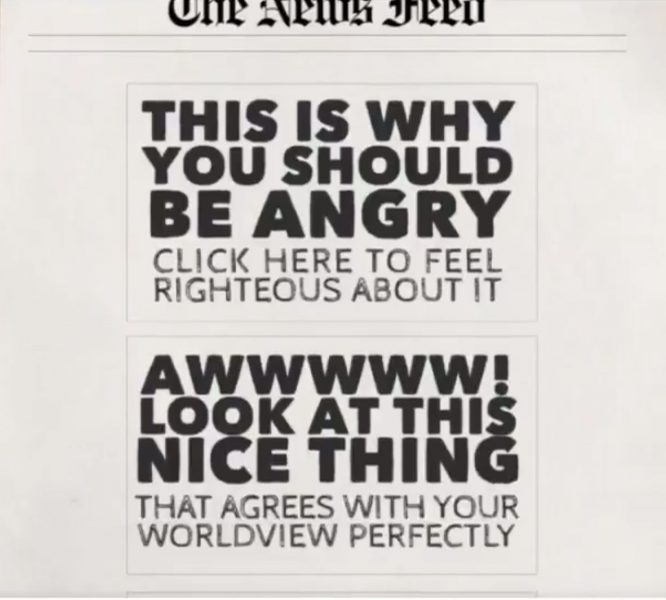 When you’re angry, you’re more willing to share an article, and that means more clicks and more ad revenue will be generated. Your brand as a media organization will rise above anyone else who doesn’t strike those primal emotional instincts in people. 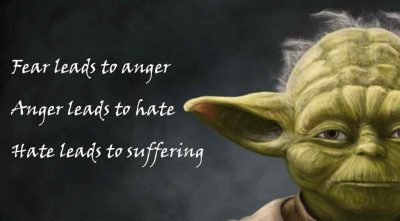 It’s mainly fear, and as Yoda said it best, it all starts with fear, which leads to anger, then that anger and outrage lead to hate. This hate then leads to suffering. We’ve suffered enough already, and this group that thinks that sensationalist fear-mongering clickbait news business is a good model needs to be put out of business. You should consciously choose to not click on those articles. 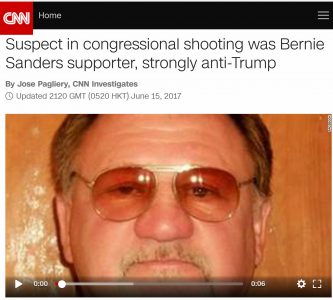 Likewise, the man who ran over Heather Heyer and dozens of other innocent bystanders do not speak for all Trump supporters.

While all of us are fighting each other and blaming each other, we forget that it was the police that never did their job that day. They stood down and pushed together the two groups of protesters wasn’t there blocking off the street so protesters could go by but ultimately left the situation and allowed it to unfold as it did in Charlottesville 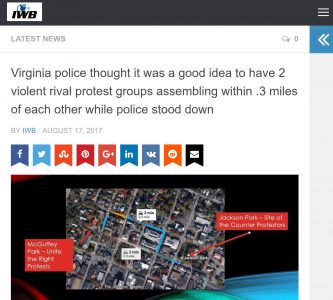 We have to understand that both extremist ideologies involved in this divide and conquer game are flawed and are only growing because of each other. Directing more anger, more frustration, more victimization against each other just ultimately divides and lets them conquer us. The establishment government and corporatocracy look at us and laugh.

The US government has previously supported fascists and sadly to this day not many people know about it. There’s barely any outcry because of it. 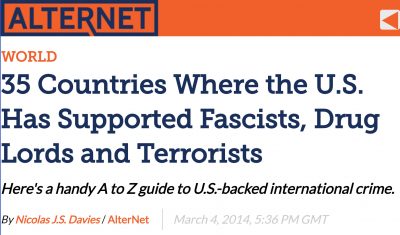 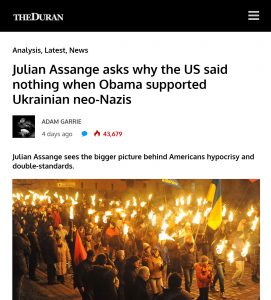 The issue of financing and supporting fascists should have been a major when Barack Obama did it by supporting the Ukrainian neo-Nazis in the civil war in Ukraine. This effort was directed against the legitimate Ukraine government of that time. Hypocrites like John McCain who previously even shared a stage, supported and backed neo-nazis need to be called out. 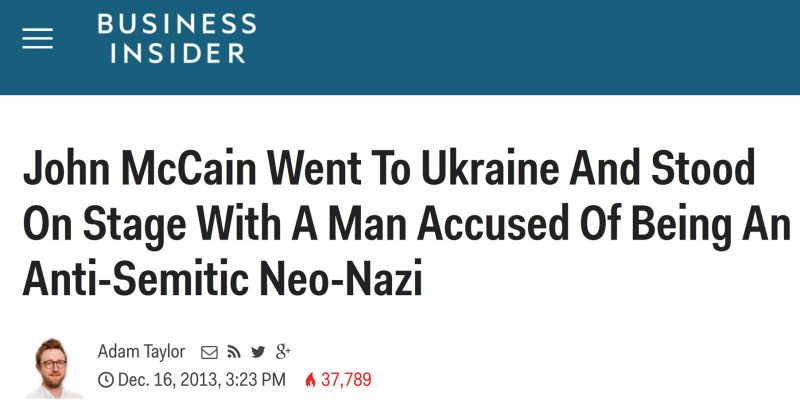 These are the same politicians that will sell you down the river. The same ones who are using this political crisis in Charlottesville to get brownie points from you and get your trust. Ultimately they are hypocritical, two-faced backstabbers that don’t mind supporting neo Nazis and fascists. Those people deserve more criticism than they’re getting right now.

Our government finances neo-nazis. The US Congress even had to remove a ban on funding neo-nazis from its year ending spending bill in 2016 following pressure from the Pentagon. 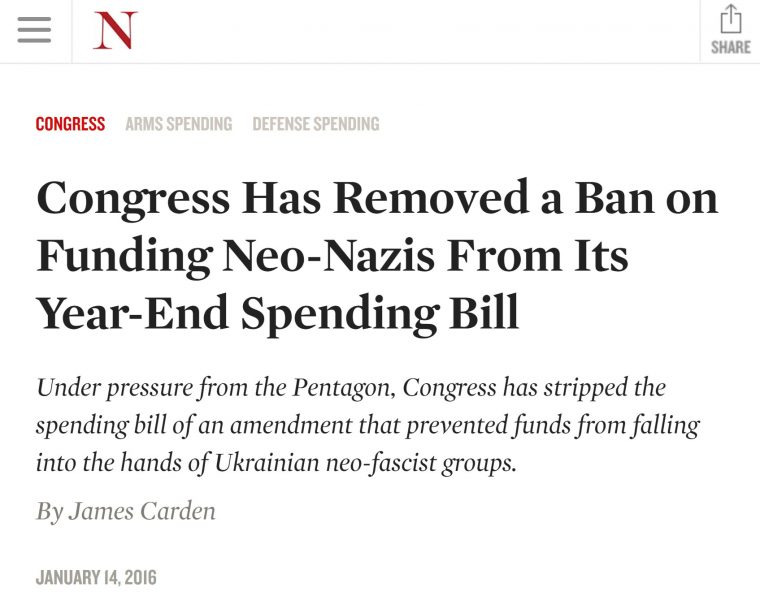 The US Empire does not care who they support as we’re even seeing Donald Trump’s support Marxist YPG Kurdish fighters in Syria. 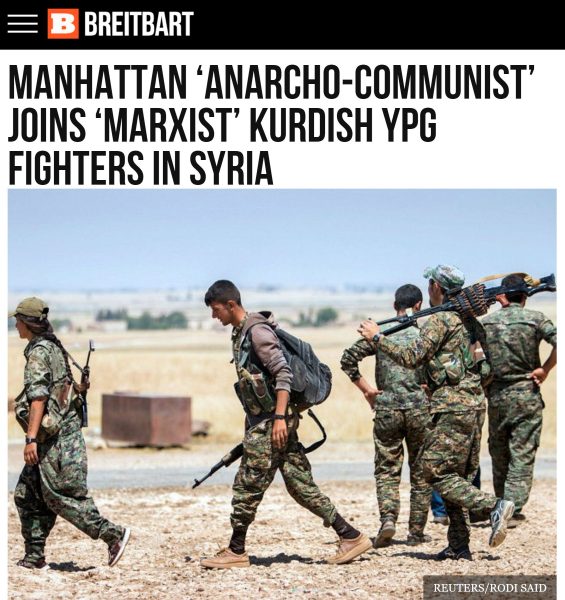 It doesn’t matter who the U.S. supports as long it goes with their agenda. That’s why we have to ask ourselves what is the agenda here with the latest events that just unfolded in Charlottesville.

It’s kind of stupid that we’re about to start a civil war in this country over statues from the last Civil War. We’re being divided and conquered, pushed against each other more than ever before. Ask yourselves this very important question “Are these Confederate monuments, which this whole situation started about, are they responsible for the death of the middle class? Who are the ones poisoning your food and water supply? Who are they the ones taxing you and using it to finance other Marxist and Fascist regimes all around the world? Is the problem really with your fellow American or is it the people behind the scenes who are pulling the strings?” 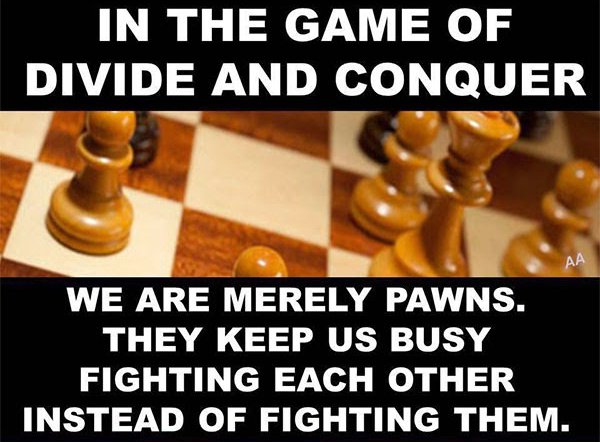 Please, let me know what you think.

I want to thank everyone from the bottom of my heart for watching and supporting real independent media. If it wasn’t for your donations and your crypto currency donations we would not be here especially after YouTube just demonetized almost every single thing we do. You are more important than ever. Love you and thank you again so much for watching.