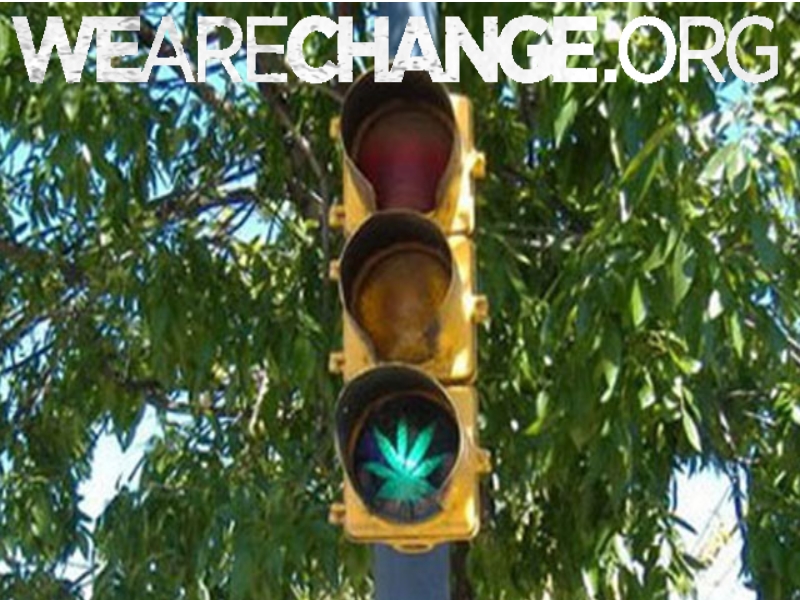 Automotive association of America study Says tests for Driving While Impaired By Marijuana Have No Scientific Basis.

FILE – In this April 2, 2016 file photo, a demonstrator waves a flag with marijuana leaves on it during a protest calling for the legalization of marijuana, outside of the White House in Washington. Six states that allow marijuana use have legal tests for driving while impaired by the drug that have no scientific basis, according to a study by the nation’s largest automobile club that calls for scrapping those laws. ( AP Photo/Jose Luis Magana, File)

US- According to a recent study by the nation’s largest automobile association, the six states that currently have legal tests to determine if a person is driving high or not should consider getting rid of their laws saying that “that have no scientific basis.”
The study commissioned by the 3A’s safety foundation claims it is not possible to set a blood-test threshold for THC,[the chemical in marijuana that gets you high] at least one that can reliably determine a persons impairment. Yet at the moment the legal limit for THC in Washington and Colorado is still set at .5 ug/L, and there’s no science that shows drivers become impaired at any specific level of THC in the blood. A lot depends upon the individual drivers with relatively high levels of THC in their systems might not be impaired, especially if they are long time regular users, while others with relatively low levels may actually be unsafe behind the wheel. At the moment five of six states that have legalized marijuana automatically presume a driver guilty if that person tests higher than the limit, and not guilty if it’s lower. As a result, drivers who are unsafe may be going free while others may be being wrongly convicted. A comparison of lane weaving observed in a simulated driving study between common legal drunk driving limits (BrAC) and the blood concentration of THC that produce a similar amount of lane weaving.

The automotive foundation’s recommendation was to scrap the laws in Colorado, Montana, Nevada, Ohio, Pennsylvania and Washington even as legislatures in several more states are considering adopting similar laws.
Just last year in a first-of-its-kind study at University of Iowa researchers concluded that the effects of inhaled cannabis only had no significant impairment on driving performance.

The AAA recommends replacing the current laws with ones that rely on the discretion of specially trained police officers to determine if a driver is impaired or not, then backed up by a test for the presence of THC rather than the charge being based only on a specific threshold. The foundation said that Colorado, Montana, Nevada, Pennsylvania, and Washington should consider scrapping their laws even as several more states consider adopting similar ones.

“There is understandably a strong desire by both lawmakers and the public to create legal limits for marijuana impairment in the same manner we do alcohol,” said Marshall Doney, AAA’s president and CEO. “In the case of marijuana, this approach is flawed and not supported by scientific research.”

Nine states have zero-tolerance laws for driving and marijuana that make not only the presence of THC in a driver’s blood illegal, but also the presence of its metabolites, which can linger for weeks after use.

“That makes no sense” according to Mark A. R. Kleiman, a New York University professor specializing in issues involving drugs and criminal policy. he says “A law against driving with THC in your bloodstream is not a law you can know you are obeying except by never smoking marijuana or never driving” rather than switching to a new kind of law as AAA recommends, states should consider simply making it a minor traffic violation.
“Using marijuana and driving roughly doubles the risk of a crash” Kleiman said. “By comparison, talking on a hands-free cellphone while driving quadruples crash risk”. “Where as a blood alcohol content of .12, which is about the median amount in drunk driving case, increases crash risk by about 15 times.. Driving with a noisy child in the back of the car is about as dangerous as using marijuana.”

The exception is when a driver has both been using marijuana and drinking alcohol because the two substances together greatly heighten impairment. Tim Brown from the study conducted at the University of Iowa’s National Advanced Driving Simulator (NADS) found drivers who use alcohol and marijuana together weave more on a virtual roadway than drivers who used either substance independently. However, the cocktail of alcohol and marijuana does not double the effect of the impairment as some others have proclaimed.

“What we saw was an additive effect, not a synergistic effect, when we put them together,” says Tim Brown, associate research scientist at NADS and co-author of the study. “You get what you expect if you take alcohol and cannabis and merge them together.”

The Automotive association also released a second study that found the share of drivers in fatal crashes who had recently used marijuana doubled in Washington after the state legalized it for recreational use in December 2012. From 2013 to 2014, the share of drivers who had recently used marijuana rose from 8 percent to 17 percent. While it stopped short of connecting the statistics directly, the AAA traffic safety director Jake Nelson said traffic fatalities went up 6 percent in Washington during that same while the fatalities nationally had declined. We all know that driving impaired on any substance is dumb and unsafe, however these recent studies go a long way in proving what many stoners have said for sometime and that is that smoking marijuana effects your driving ability far less then drink booze, sexting, doing make up, or attempting to beat rush-hour traffic eating a burrito in a thunderstorm, which would be perfectly legal in all 50 states.