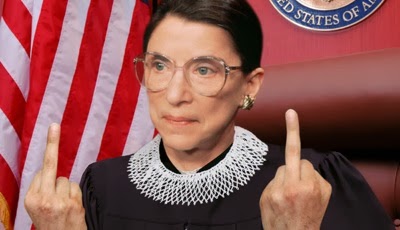 Canon 5 is the code of conduct for U.S. judges. It states –

In one interview she had with the New York Times, she bashed Donald Trump saying –

In another interview she had with the Associated Press, when asked if Donald Trump won the election, she said –

“I don’t want to think about that possibility, but if it should, be, then everything is up for grabs.” ~ Justice Ruth Bader Ginsberg.

“This was a remarkably stupid and egregious comment for a sitting Supreme Court justice to make on the record. Say what you will about Justices Antonin Scalia, who died in February, or Clarence Thomas, but they never weighed in on presidential politics quite like this. The closest example I can find is that in January 2004, during an election year, Scalia went on a hunting trip with Vice President Dick Cheney. That action alone got legal ethicists into a lather.
What Ginsburg did was way worse, though. Indeed, I can find no modern instance of a Supreme Court justice being so explicit about an election — and for good reason.”

This is historic, as no other Supreme Court justice has spoken out on politics like this. The last time a Supreme Court Justice Judge got involved in Politics was when Justice Antonin Scalia decided he would take a hunting trip with Dick Cheney amid a White House appeal in a case involving private meetings of the Vice President’s energy task force. Even that raised the question of ethics and a lot of eye brows in the process, and Scalia didn’t even say anything. Scalia then said he wouldn’t apologize for the trip saying.

Will the same happen here with this Supreme Court Justice making such outrageous comments?

Should Ruth Bader Ginsberg resign and step down immediately? Her ethics are in question now, and any of her rulings can be called into question as impartial — especially if put into a position where she has to rule on the election of Donald Trump, or his policies. Can we expect her to put aside her hate for Trump to rule fairly for America?

Update Ginsberg has since expressed regret for her comments made about Presidential Candidate Donald Trump.