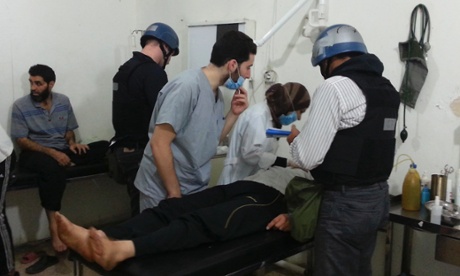 Massacres of civilians are being exploited for narrow geopolitical competition to control Mideast oil, gas pipelines U.N. chemical weapons experts visit people affected by an apparent gas attack, at a hospital in the southwestern Damascus suburb of Mouadamiya.

On 21 August, hundreds – perhaps over a thousand – people were killed in a chemical weapon attack in Ghouta, Damascus, prompting the US, UK, Israel and France to raise the spectre of military strikes against Bashir al Assad’s forces.

The latest episode is merely one more horrific event in a conflict that has increasingly taken on genocidal characteristics. The case for action at first glance is indisputable. The UN now confirms a death toll over 100,000 people, the vast majority of whom have been killed by Assad’s troops. An estimated 4.5 million people have been displaced from their homes. International observers have overwhelmingly confirmed Assad’s complicity in the preponderance of war crimes and crimes against humanity against the Syrian people. The illegitimacy of his regime, and the legitimacy of the uprising, is clear.

Experts are unanimous that the shocking footage of civilians, including children, suffering the effects of some sort of chemical attack, is real – but remain divided on whether it involved military-grade chemical weapons associated with Assad’s arsenal, or were a more amateur concoction potentially linked to the rebels.

Whatever the case, few recall that US agitation against Syria began long before recent atrocities, in the context of wider operations targeting Iranian influence across the Middle East.

In May 2007, a presidential finding revealed that Bush had authorised CIA operations against Iran. Anti-Syria operations were also in full swing around this time as part of this covert programme, according to Seymour Hersh in the New Yorker. A range of US government and intelligence sources told him that the Bush administration had “cooperated with Saudi Arabia’s government, which is Sunni, in clandestine operations” intended to weaken the Shi’ite Hezbollah in Lebanon. “The US has also taken part in clandestine operations aimed at Iran and its ally Syria,” wrote Hersh, “a byproduct” of which is “the bolstering of Sunni extremist groups” hostile to the United States and “sympathetic to al-Qaeda.” He noted that “the Saudi government, with Washington’s approval, would provide funds and logistical aid to weaken the government of President Bashir Assad, of Syria,” with a view to pressure him to be “more conciliatory and open to negotiations” with Israel. One faction receiving covert US “political and financial support” through the Saudis was the exiled Syrian Muslim Brotherhood.

According to former French foreign minister Roland Dumas, Britain had planned covert action in Syria as early as 2009: “I was in England two years before the violence in Syria on other business”, he told French television:

“I met with top British officials, who confessed to me that they were preparing something in Syria. This was in Britain not in America. Britain was preparing gunmen to invade Syria.”

The 2011 uprisings, it would seem – triggered by a confluence of domestic energy shortages and climate-induced droughts which led to massive food price hikes – came at an opportune moment that was quickly exploited. Leaked emails from the private intelligence firm Stratfor including notes from a meeting with Pentagon officials confirmed US-UK training of Syrian opposition forces since 2011 aimed at eliciting “collapse” of Assad’s regime “from within.”

So what was this unfolding strategy to undermine Syria and Iran all about? According to retired NATO Secretary General Wesley Clark, a memo from the Office of the US Secretary of Defense just a few weeks after 9/11 revealed plans to “attack and destroy the governments in 7 countries in five years”, starting with Iraq and moving on to “Syria, Lebanon, Libya, Somalia, Sudan and Iran.” In a subsequent interview, Clark argues that this strategy is fundamentally about control of the region’s vast oil and gas resources.

Much of the strategy currently at play was candidly described in a 2008 US Army-funded RAND report, Unfolding the Future of the Long War (pdf). The report noted that “the economies of the industrialized states will continue to rely heavily on oil, thus making it a strategically important resource.” As most oil will be produced in the Middle East, the US has “motive for maintaining stability in and good relations with Middle Eastern states”:

“The geographic area of proven oil reserves coincides with the power base of much of the Salafi-jihadist network. This creates a linkage between oil supplies and the long war that is not easily broken or simply characterized… For the foreseeable future, world oil production growth and total output will be dominated by Persian Gulf resources… The region will therefore remain a strategic priority, and this priority will interact strongly with that of prosecuting the long war.”

In this context, the report identified several potential trajectories for regional policy focused on protecting access to Gulf oil supplies, among which the following are most salient:

“Divide and Rule focuses on exploiting fault lines between the various Salafi-jihadist groups to turn them against each other and dissipate their energy on internal conflicts. This strategy relies heavily on covert action, information operations (IO), unconventional warfare, and support to indigenous security forces… the United States and its local allies could use the nationalist jihadists to launch proxy IO campaigns to discredit the transnational jihadists in the eyes of the local populace… US leaders could also choose to capitalize on the ‘Sustained Shia-Sunni Conflict’ trajectory by taking the side of the conservative Sunni regimes against Shiite empowerment movements in the Muslim world…. possibly supporting authoritative Sunni governments against a continuingly hostile Iran.”

Exploring different scenarios for this trajectory, the report speculated that the US may concentrate “on shoring up the traditional Sunni regimes in Saudi Arabia, Egypt, and Pakistan as a way of containing Iranian power and influence in the Middle East and Persian Gulf.” Noting that this could actually empower al-Qaeda jihadists, the report concluded that doing so might work in western interests by bogging down jihadi activity with internal sectarian rivalry rather than targeting the US:

“One of the oddities of this long war trajectory is that it may actually reduce the al-Qaeda threat to US interests in the short term. The upsurge in Shia identity and confidence seen here would certainly cause serious concern in the Salafi-jihadist community in the Muslim world, including the senior leadership of al-Qaeda. As a result, it is very likely that al-Qaeda might focus its efforts on targeting Iranian interests throughout the Middle East and Persian Gulf while simultaneously cutting back on anti-American and anti-Western operations.”

The RAND document contextualised this disturbing strategy with surprisingly prescient recognition of the increasing vulnerability of the US’s key allies and enemies – Saudi Arabia, the Gulf states, Egypt, Syria, Iran – to a range of converging crises: rapidly rising populations, a ‘youth bulge’, internal economic inequalities, political frustrations, sectarian tensions, and environmentally-linked water shortages, all of which could destabilise these countries from within or exacerbate inter-state conflicts.

The report noted especially that Syria is among several “downstream countries that are becoming increasingly water scarce as their populations grow”, increasing a risk of conflict. Thus, although the RAND document fell far short of recognising the prospect of an ‘Arab Spring’, it illustrates that three years before the 2011 uprisings, US defence officials were alive to the region’s growing instabilities, and concerned by the potential consequences for stability of Gulf oil.

These strategic concerns, motivated by fear of expanding Iranian influence, impacted Syria primarily in relation to pipeline geopolitics. In 2009 – the same year former French foreign minister Dumas alleges the British began planning operations in Syria – Assad refused to sign a proposed agreement with Qatar that would run a pipeline from the latter’s North field, contiguous with Iran’s South Pars field, through Saudi Arabia, Jordan, Syria and on to Turkey, with a view to supply European markets – albeit crucially bypassing Russia. Assad’s rationale was “to protect the interests of [his] Russian ally, which is Europe’s top supplier of natural gas.”

Instead, the following year, Assad pursued negotiations for an alternative $10 billion pipeline plan with Iran, across Iraq to Syria, that would also potentially allow Iran to supply gas to Europe from its South Pars field shared with Qatar. The Memorandum of Understanding (MoU) for the project was signed in July 2012 – just as Syria’s civil war was spreading to Damascus and Aleppo – and earlier this year Iraq signed a framework agreement for construction of the gas pipelines.

The Iran-Iraq-Syria pipeline plan was a “direct slap in the face” to Qatar’s plans. No wonder Saudi Prince Bandar bin Sultan, in a failed attempt to bribe Russia to switch sides, told President Vladmir Putin that “whatever regime comes after” Assad, it will be “completely” in Saudi Arabia’s hands and will “not sign any agreement allowing any Gulf country to transport its gas across Syria to Europe and compete with Russian gas exports”, according to diplomatic sources. When Putin refused, the Prince vowed military action.

It would seem that contradictory self-serving Saudi and Qatari oil interests are pulling the strings of an equally self-serving oil-focused US policy in Syria, if not the wider region. It is this – the problem of establishing a pliable opposition which the US and its oil allies feel confident will play ball, pipeline-style, in a post-Assad Syria – that will determine the nature of any prospective intervention: not concern for Syrian life.

What is beyond doubt is that Assad is a war criminal whose government deserves to be overthrown. The question is by whom, and for what interests?

Dr Nafeez Ahmed is executive director of the Institute for Policy Research & Development and author of A User’s Guide to the Crisis of Civilisation: And How to Save It among other books. Follow him on Twitter @nafeezahmed