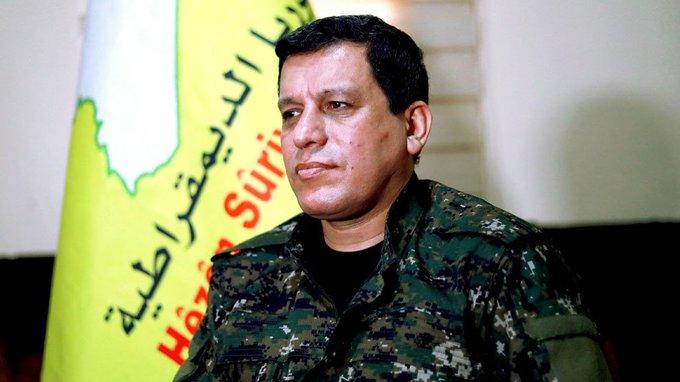 As we predicted in the wake of the White House’s late Sunday announcement that “Turkey will soon be moving forward with its long-planned operation into Northern Syria” and that American troops will withdraw from the “immediate area” — this will ensure that the United States’ Kurdish proxies in Syria, now in Erdogan’s cross hairs, will quickly do a deal with “the devil we know” — that is, come under the protection of Assad and the Syrian Army.

On Monday the commander of the US trained and armed Syrian Democratic Forces (SDF), Mazlum Abdi, indicated just that in a bombshell statement. “We are considering a partnership with Syrian President Bashar al-Assad, with the aim of fighting Turkish forces,” he said.

“This is one of the options we have on the table,” the top SDF commander added. In the statement he further called on the American people to put pressure on President Donald Trump to stay the course in northeast Syria.

No doubt this is sure to get the immediate attention of the top Pentagon brass, given current and former defense officials (in both the Obama and Trump administrations) have routinely said that among US goals in Syria is ensuring Syria’s Kurdish militias do not seek rapprochement with Damascus.

In most places were the Kurdish YPG/SDF are dominant, they simply inherited control of territory which the Syrian Army had in 2013 and 2014 rapidly withdrew from amid an intense al-Qaeda/ISIS onslaught. Thus throughout the war in many local areas along the Euphrates Kurdish and pro-Assad forces have entered into pragmatic and tacit cooperation, despite being official “enemies” based on Kurdish-US partnership.

Of the possible looming US troops withdrawal, or at least a withdraw from crucial border posts in the north, Abdi said in an interview with NBC News: “Frankly, this makes us disappointed. The decision harms Syrian trust in the United States and the credibility of the United States.”

The Commander-in-Chief of the Syrian Democratic Armed Forces, Mazlum Abdi: "We are considering a partnership with Syrian President Bashar al-Assad, with the aim of fighting Turkish forces."#Twitterkurds #Rojava #SDF #SAA #Turkey #TSK pic.twitter.com/gARn4Rdom0

The SDF commander also addressed the question of the thousands of ISIS prisoners currently in Kurdish SDF custody: “Monitoring ISIS prisoners imprisoned in Syria is a ‘second priority’ now that the United States has paved the way for a Turkish attack that is likely to target our forces along the border,” Abdi explained.

Concerning talks with Damascus, which have actually been quietly occurring off and on for months (possibly years), the Syrian Kurdish parties are no longer negotiating from a position of strength, and will have little choice but the cede much of their prior autonomy to the Syrian state once protective US forces finally exit.

“If America vacates the area and especially the border area for certain we, as a self administration and as the SDF, will be forced to study all the available options.”

“At that time we may hold talks with Damascus or the Russian side to fill the void or block the Turkish attack, so this may develop and there could be meetings and contacts in case of a vacuum,” he added.

Of course, the future fate of Syria’s key oil and gas fields — the vast majority of which are located precisely in current Syrian Kurdish/US-backed SDF zones — will be an interesting question. Damascus may ultimately lose a major chunk of its sovereign territory along the northern border to the Turks for a long time to come, but may regain its domestic energy resources once again.

But if past Trump administration unpredictability on Syria is any sign, the entire situation could be reversed just as quickly as this week’s events have been initiated.