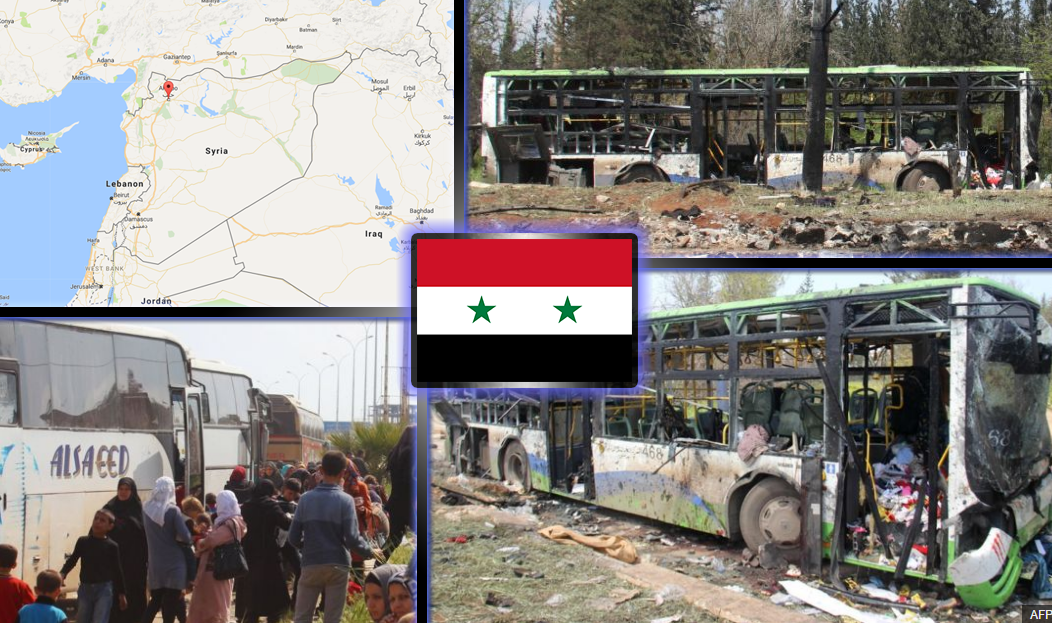 Footage taken near the site of the explosion that killed 100 people at the moment the bomb went off #fuah_kafraya_massacre #Syria pic.twitter.com/sPj94VBEAZ

While the mainstream is silent, reports from onlookers and independent media suggest at least 100 people were killed at the moment of the explosion on Saturday.

The attack was suspected to be carried out by US-Backed Al Qaeda militants in Syria. Al-jazeera reports that the militants targeted a Syrian evacuation convoy that was getting refugees out of Rashidin and Aleppo. The mainstream media has not made any effort to report on this awful atrocity.

ABNA reported on Friday, that at least ‘5000 Shias of Al-Fou’aa, Kafraya’ were to leave Idlib on the targeted evacuation convoys.

The Syrian Observatory for Human Rights claimed that most of the dead were the targeted evacuees. However, they also suspect that several rebels who had been guarding the buses at a transit point in Rashidin were killed. They added that the attack targeted residents evacuated from the northern towns of Fuaa and Kafraya under a deal reached between Bashar Al Assad’s regime and Syrian rebels.

A reporter in rebel-held Rashidin claimed to have seen several bodies, dismembered body parts and blood across the ground.

“The suicide bomber was driving a van supposedly carrying aid supplies and detonated near the buses,” the Observatory said. It warned that the death toll was likely to rise given the “several dozen wounded” at the blast site.

The evacuation was agreed upon by regime ally Iran and rebel backer Qatar. It aims to free more than 30,000 in two stages. The deal had assessed that in the first stage, 8,000 people, of which there were 2,000 loyalist fighters, would leave the two towns.

Syrian Minister for Foreign Affairs, Charlie Flanagan said in a statement to RTE:

“The bomb attack on evacuees in Rashidin in Syria is a heinous crime.It seems like an attack designed to provoke and to undo even limited local progress. It is an attack on people at their most vulnerable. I condemn it and call for those responsible to be brought to justice.”

While Twitter has exploded in solidarity for the atrocity and numerous independent and local media outlets are covering the attack, the majority of mainstream organisations CNN, BBC and the like — are all sickeningly silent.

Strangely, the mainstream media jumps to report on attacks with no concrete perpetrator, such as the chemical attack claimed to be carried out by Assad’s regime days after the Trump administration’s Rex Tillerson stated ‘Assad Can Stay.’ However, they are strangely silent on a large scale atrocity such as this. Selective reporting, or intentional saber-rattling against Assad’s government?