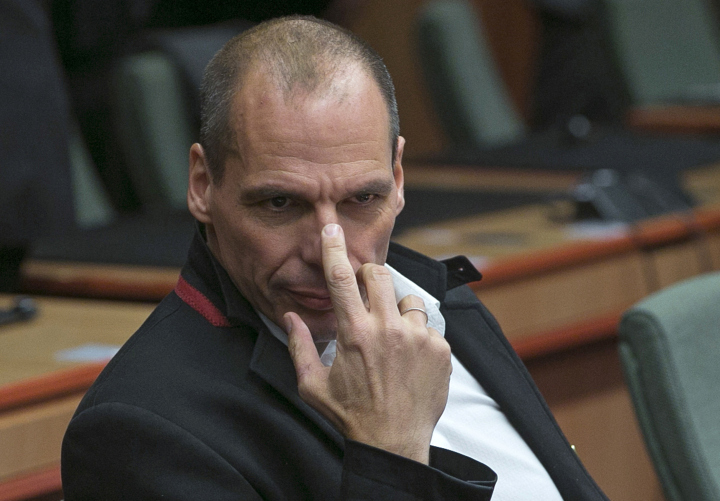 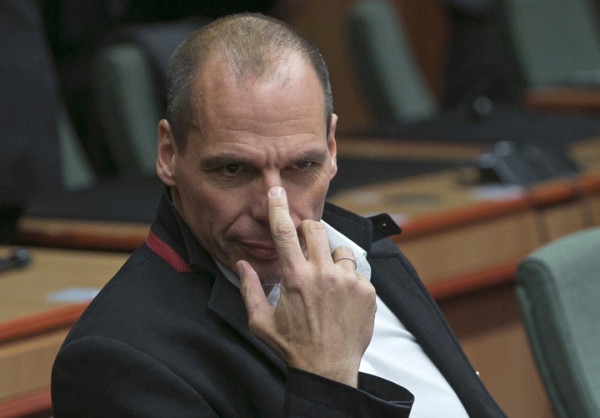 Greek Finance Minister Yanis Varoufakis waits for the start of an extraordinary euro zone Finance Ministers meeting (Eurogroup) to discuss Athens’ plans to reverse austerity measures agreed as part of its bailout, in Brussels February 20, 2015. Greece has made every effort to reach a mutually beneficial agreement with its euro zone partners but will not be pushed to implement its old bailout programme, its government spokesman said on Friday. REUTERS/Yves Herman (BELGIUM – Tags: POLITICS BUSINESS TPX IMAGES OF THE DAY) – RTR4QGAY

(mindsetsathreat.com) Yannis Varoufakis, ex Greek finance minister has claimed that a month before the elections that saw Syriza take power in Greece, he and a few other specially selected individuals had a secret plan to leave the Euro and return to Drachmas. And the method of doing so was to be by creating a parallel payment system that could operate in Euros but be changed into Drachmas overnight, according the Greek newspaper ekathimerini that released a transcript between Varoufakis and ‘members of international hedge funds’. Achieving this would involve the slightly more complicated process of hacking a troika controlled website and stealing various codes. ekathimerini goes into more detail,

“The plan would involve hijacking the AFMs of taxpayers and corporations by hacking into General Secretariat of Public Revenues website, Varoufakis told his interlocutors. This would allow the creation of a parallel system that could operate if banks were forced to close and which would allow payments to be made between third parties and the state and could eventually lead to the creation of a parallel banking system, he said.”

The general secretariat of public revenues contains tax codes that would allow Varoufakis and co. to copy the necessary codes into a new computer and set up a parallel banking system. Or as Varoufakis put it himself,

“we decided to hack into my ministry’s own software program in order to be able break it up to just copy just to copy the code of the tax systems website onto a large computer in his office so that he can work out how to design and implement this parallel payment system.”

In simpler terms this would give the ministry of finance the power to convert their Euros to Drachmas if necessary and escape the treacherous grasps of the creditors without causing an even bigger economic catastrophe.

To help him hack into the troika controlled website Varoufakis was to employ his childhood friend, an information technology expert who became a professor at Columbia University.

The plan was eventually abandoned as PM Tsipras did not give permission for the plan to move forward.

Another very noteworthy piece of information from the transcript is what Varoufakis claims he was told by German finance minister Wolfgang Schaeuble:

“Schaeuble has a plan. The way he described it to me is very simple. He believes that the eurozone is not sustainable as it is. He believes there has to be some fiscal transfers, some degree of political union. He believes that for that political union to work without federation, without the legitimacy that a properly elected federal parliament can render, can bestow upon an executive, it will have to be done in a very disciplinary way. And he said explicitly to me that a Grexit is going to equip him with sufficient bargaining, sufficient terrorising power in order to impose upon the French that which Paris has been resisting. And what is that? A degree of transfer of budget making powers from Paris to Brussels.”

This further confirms what some(at least within the alternative media) have theorized about the Greek debt crisis. That Greece is being used as an example to scare other member states into the further sacrifice of their sovereignty.