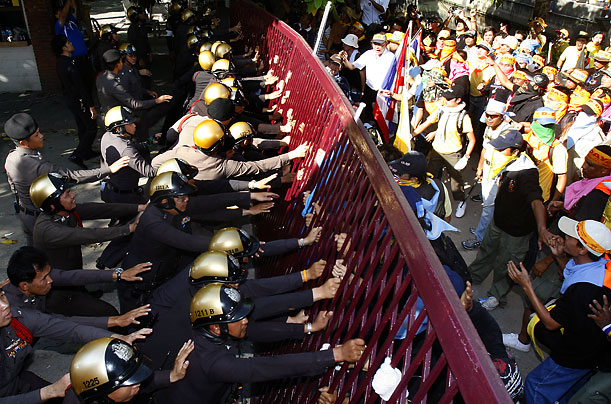 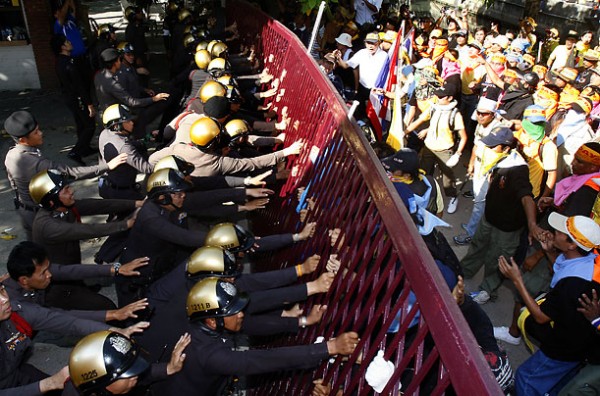 BANGKOK – Nearly 15,000 police and soldiers will be deployed in the Thai capital next week for the planned “shutdown” of Bangkok by demonstrators trying to overthrow the government, officials said Wednesday.

Prime Minister Yingluck Shinawatra has called February elections following weeks of opposition street protests. But the demonstrators have vowed to block the vote, which they fear will only prolong the political dominance of her billionaire family.

The protesters say they will occupy the capital from January 13 until they win their battle to topple the government.

They plan to set up stages around the city, preventing officials from going to work and cutting off power and water to state buildings. The government is mobilising 14,880 police and soldiers for the mass rally, national police spokesman Piya Uthayo said in a televised briefing.

“Our goal is to prevent any violence or clashes,” he said.

Thai stocks and the baht currency have fallen sharply on concerns that the deepening crisis will scare off foreign tourists and international investment.

Singapore Airlines has already cancelled 19 flights to Bangkok between 14 January and 25 February. Bangkok city authorities have instructed 146 schools to close on Monday because of the shutdown.

Officials say the government is ready to declare a state of emergency if needed to deal with any unrest, following several outbreaks of street violence in which eight people, including a policeman, have been killed and hundreds wounded. Critics say the protesters want to provoke fresh clashes in the hope of triggering a military coup on the pretext of restoring order – an accusation the demonstrators deny.

Thailand has been periodically shaken by political bloodshed since Yingluck’s older brother Thaksin Shinawatra was toppled by royalist generals in a coup seven years ago.

The demonstrators, who largely comprise southerners, royalists, middle-class Thais and urban elite, accuse the billionaire tycoon-turned-politician of corruption, and say he controls his sister’s government from his self-exile in Dubai.

They want an unelected “people’s council” to run the country to oversee vague reforms, such as an end to alleged “vote buying” through populist policies, before new elections are held in around a year to 18 months. Yingluck’s government still enjoys strong support in the north and northeast of the country and is expected to win the February 2 election if it goes ahead.

The recent civil strife is the worst since 2010, when more than 90 people were killed in a bloody military crackdown on pro-Thaksin Red Shirt protests under the previous government.

Ex-deputy premier Suthep Thaugsuban was due in court Wednesday to face a murder indictment over those deaths, but he asked for another postponement because he is leading the current protests.

If he fails to appear again prosecutors will seek an warrant for his arrest, the attorney general’s office said, in addition to an existing warrant for insurrection for trying to topple the government.