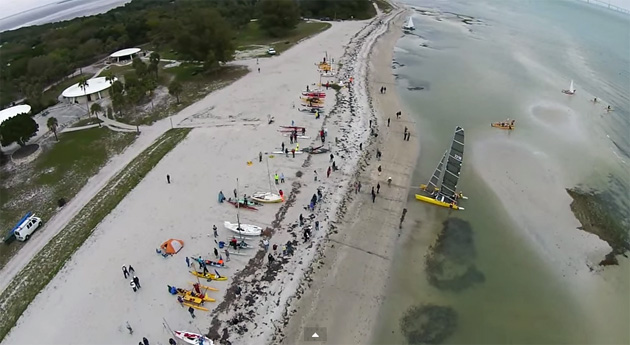 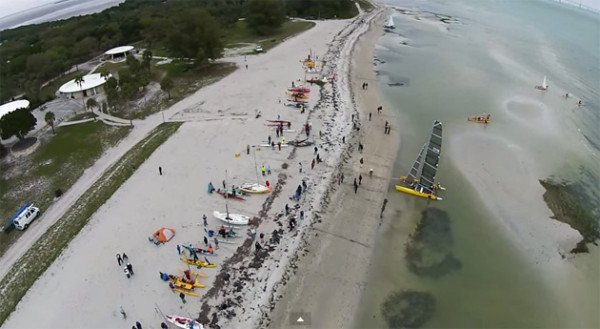 If you fly a drone and post footage on YouTube, you could end up with a letter from the Federal Aviation Administration.

Earlier this week, the agency sent a legal notice to Jayson Hanes, a Tampa-based drone hobbyist who has been posting drone-shot videos online for roughly the last year.

The FAA said that, because there are ads on YouTube, Hanes’s flights constituted a commercial use of the technology subject to stricter regulations and enforcement action from the agency. It said that if he did not stop flying “commercially,” he could be subject to fines or sanctions.

“This office has received a complaint regarding your use of an unmanned aerial vehicle (aka drone) for commercial purposes referencing your video on the website youtube.com as evidence,” the letter reads. “After a review of your website, it does appear that the complaint is valid.”
The hobby use of drones and other model aircraft has never been regulated by the FAA, but the agency has been adamant about making a distinction between hobby and commercial use, which has led to much confusion over the last couple years.

The letter makes clear that at least some in the FAA (this one was sent by Michael Singleton, an aviation safety inspector in the FAA’s Tampa office) take a very wide view of what is “commercial.”

“With this letter the FAA is claiming that drone-obtained art created by a hobbyist becomes retroactively ‘commercial’ if it is ever sold, or if, as here, it is displayed on a website that offers monetization in the form of advertising,” Peter Sachs, a Connecticut-based attorney specializing in drone issues told me. “Selling art is unquestionably one’s right, and the government is forbidden from infringing upon that right.”

Hanes told me that his videos are technically “monetized” on YouTube but that he has never received a payment from Google and the revenue he’s technically earned from Google’s ads is less than a dollar.

FAA spokesperson Les Dorr told me he is looking into specifics of the case, but said that, often, competitors will alert local enforcement offices about drone use. The question then, is can someone really have a “competitor” if they’re not flying commercially?

“In general, whenever we receive a complaint about an unauthorized UAS operation, we contact the operator and educate them about the regulations so they can comply,” Dorr said. “It’s not uncommon for a competitor who is not flying a UAS to alert us to such operations. I don’t know if that was the case here.”
Hanes’s case is without precedent. The FAA ?has sent many cease-and-desist letters to commercial drone operators, but those letters have mainly been in response to registered businesses that advertise drone-for-hire services on their websites. To my knowledge, the agency hasn’t sent letters like this to hobbyists. Hanes’s website redirects to his YouTube page, and he offers no traditional commercial services.

The FAA has said it ?has the ability to fine or otherwise enforce certain restrictions on drones (which have not yet been tested in court). In the past, those fines ?have been as much as $10,000. Those restrictions are supposed to stop pilots from flying over people and from flying above 500 feet. Some of Hanes’s videos show him flying in ways that could potentially run afoul of those restrictions.

Dorr, who was not involved in sending the letter to Hanes, reviewed some of his videos in response to my inquiry. He says it’s possible the letter was sent because of those potential safety violations. It’s worth mentioning that the FAA’s drone enforcement strategy is a bit of a mess. Regional safety offices decide initial enforcement, often without contacting FAA headquarters or ?considering things such as the First Amendment.

“It would behoove the FAA Office of Chief Counsel to make it abundantly clear to all aviation safety inspectors that the First Amendment is alive and well,” Sachs said.

The fact that Hanes received a letter or was contacted by the FAA, then, isn’t nuts. The FAA is well within its rights to at least tell a drone operator to not fly dangerously.

But why, then, is the FAA hiding behind the sham argument that he’s flying “commercially”? And, if the agency decides that putting videos on YouTube is a business use of a drone, what does it mean for the thousands of other people who post drone videos online?

Update: The FAA says it’s now looking further into how its safety inspectors send letters like this.

“The FAA’s goal is to promote voluntary compliance by educating individual UAS operators about how they can operate safely under current regulations and laws,” the agency said. “The FAA’s guidance calls for inspectors to notify someone with a letter and then follow up. The guidance does not include language about advertising. The FAA will look into the matter.”