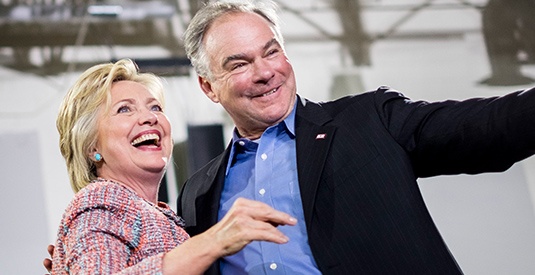 Hillary Clinton’s former running mate, Senator Tim Kaine, is cheering his son on after he was arrested on suspicion of second-degree rioting at a pro-Donald Trump rally on Saturday.

Linwood Kaine, 24, was arrested during the “March 4 Trump” rally inside the Minnesota State Capitol in St. Paul. While the rallies were held nationwide as a means of showing peaceful support for the US president, the events were interrupted in many cities by violent leftist protests.

“Counter-protesters clashed with Trump supporters in the Capitol rotunda after they disrupted the proceedings with air horns, whistles and chants. At one point, someone set off a smoke bomb,” Twin Cities Pioneer Press reports.

Kaine’s youngest son was held in jail from Saturday through Tuesday, according to the Washington Examiner. Four others were also arrested at the protest on riot charges. None of those arrested have been charged, but the city attorney is reportedly weighing filing misdemeanor charges.

After news broke about his son’s arrest, the Virginia senator issued a statement of support for his actions.

“We love that our three children have their own views and concerns about current political issues,” Senator Kaine’s statement said. “They fully understand the responsibility to express those concerns peacefully.”

Approximately 400 Trump supporters had gathered for a peaceful rally when roughly 50 protesters arrived. A 61-year-old woman, who supports Trump, was reportedly struck in the head with a smoke bomb. Several fights broke out, and pepper spray was deployed through the crowd. A group of people were also seen lighting fireworks inside the rotunda of the building where the rally was taking place. It is currently under investigation if Kaine was one of the protesters lighting them, as he was seen with the others who were.

Once police began to intervene, the protesters ran — including Kaine. When an officer approached him to detain him, “he turned around and squared up to fight with the officer,” Steve Linders, a St. Paul police spokesman, said Tuesday.

“The officer was able to place Mr. Kaine under arrest and take him to the Ramsey County jail for booking,” Linders continued, explaining that “some force” had to be used.

It seems as though Senator Kaine has an interesting interpretation of the word “peacefully.”

In January, Senator Kaine appeared on MSNBC’s “Morning Joe,” and urged Democrats to “fight in Congress, fight in the courts, fight in the streets, fight online, fight at the ballot box,” against the president.