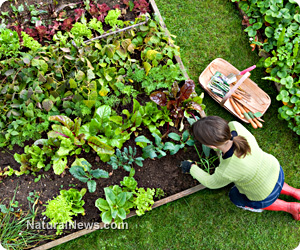 The first food bank in the world was St. Mary’s Food Bank Alliance in Arizona, founded by retired business man John van Hengal in 1967 and still strong today. While volunteering at St. Vincent’s soup kitchen, John met a woman who came often and told him that she depended on the soup kitchen and supermarket dumpsters to survive.

That’s when John got the idea for the food bank, which has since been replicated in several cities in every American state and many other nations. At first, food banks relied on food processing rejects or excess retail warehouse packaged foods that were considered marginal or too close to the “sell by” date to go on the shelves.

But initially, they distributed almost no fresh produce directly from agriculture.

A shift toward fresh food from the soil

As the food processing industry and grocery industry became better at avoiding banged up packaging or letting food items pass their sale dates, the availability of free or low-cost food for free distribution dwindled.

And as the unhealthy nature of processed foods became more obvious to a greater number of people, supplying fresh produce gradually became the goal of many food banks.

A major player in this movement was Bill Folz of the California Association of Food Banks, who developed the Farm to Family project. He and his colleagues became gleaners, picking out vegetables and fruits that were rejected as unworthy for retailers though still edible and nutritious.

But the level of gleaning was way beyond walking through fields after a harvest and collecting what was unsuitable for the marketplace in sacks. This project evolved into collecting massive amounts of produce at very low costs from farm storage facilities that weren’t getting sold to retailers or through food brokers.

Highly nutritious white sweet potatoes were among the first and easiest to collect for next to nothing. Those potatoes don’t have the secondary processed food market (chips, canned pie fillings, etc.) to purchase them that orange sweet potatoes enjoy.

The challenges of procuring fresh foods varied according to the types of food. Some foods that weren’t up to being sold as-is in retail could be sold to food processors who made snack or ready-made canned variations from them. Some others, especially fruits, were too ripe to be sold and needed to be stored under intense refrigeration.

But in a few short years, the Farm to Family project of the California Association of Food Banks has met those challenges with a capacity of collecting over 80 million pounds of produce for distribution.

Now, some food banks are even growing their own produce. A food bank in Vermont purchased a 20-acre farm a few years ago.

Most recently, a food bank in a suburb of Philadelphia’s Chester County has joined 20 other food banks that grow some of their own, providing a fourth to a third of what they distribute. The Chester County food bank has over 12 acres spread out into smaller lots, some with covered grow housing.

Agricultural director Bill Shick notes that volunteers are more excited to participate in the growing process than simply placing cans into boxes or stuffing envelopes.

Most of what they grow are leafy vegetables that would require expensive refrigeration if procured from outside farms. In addition to providing higher nutrition to needy families, this keeps food bank overhead costs down.