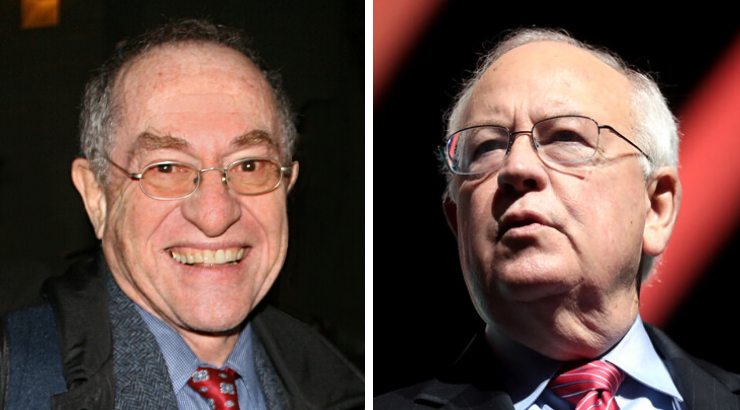 The team of lawyers that will be representing Donald Trump for his impeachment will include a few controversial figures including Alan Dershowitz and Ken Starr, two of the attorneys who represented the disgraced billionaire pedophile Jeffrey Epstein while he was trafficking sex slaves across the globe for powerful old men.

Dershowitz has also represented Harvey Weinstein in the past as well as O.J. Simpson while Starr served as the lead investigator in the impeachment case against Bill Clinton in 1998.

However, Dershowitz has clarified that he is not a “full-fledged” member of the impeachment defense team. In an interview on The Dan Abrams Show on SiriusXM’s POTUS Channel Dershowitz said that he will only provide an hourlong “constitutional argument against impeachment” for Trump but is not actually retained as his lawyer.

“I think it overstates it to say I’m a member of the Trump team. I was asked to present the constitutional argument that I would have presented had Hillary Clinton been elected and had she been impeached,” Dershowitz explained.

“I was asked to present my constitutional argument against impeachment. I will be there for one hour, basically, presenting my argument. But I’m not a full-fledged member of the defense team in any realistic sense of that term,” he added.

STATEMENT REGARDING PROFESSOR DERSHOWITZ’S ROLE IN THE SENATE TRIAL – Professor Dershowitz will present oral arguments at the Senate trial to address the constitutional arguments against impeachment and removal. (1of 2)

(2 of 3) While Professor Dershowitz is non partisan when it comes to the constitution—he opposed the impeachment of President Bill Clinton and voted for Hillary Clinton— he believes the issues at stake go to the heart of our enduring Constitution.

(3of 3) He is participating in this impeachment trial to defend the integrity of the Constitution and to prevent the creation of a dangerous constitutional precedent.

Regardless of his official role on the team Dershowitz has been meeting with Trump over the past several months amid the looming impeachment. The two even met on Christmas Eve at Trump’s infamous Mar-a-Lago resort in West Palm Beach, Florida. The Hill reported at the time that there were speculations that Dershowitz would be on Trump’s legal team for the upcoming impeachment hearings.

Dershowitz and Starr are not Trump’s only connection to Jeffrey Epstein. In fact the two were close friends for a long time. Trump made attempts to distance himself from Epstein after the pedophile’s conviction but there has a long, documented history between the two.

In fact, Trump’s former Labor Secretary, Alex Acosta, is the lawyer who was responsible for helping Epstein cut a deal to avoid any serious jail time in his previous case. Although Acosta was the prosecutor in the case he worked with Epstein and the defense behind the backs of the victims to ensure that the billionaire pedophile received special treatment.

Acosta was ultimately forced to resign from the Trump administration after his connection to Epstein began to make international headlines.