Who Should Donald Trump Choose for Secretary of State? 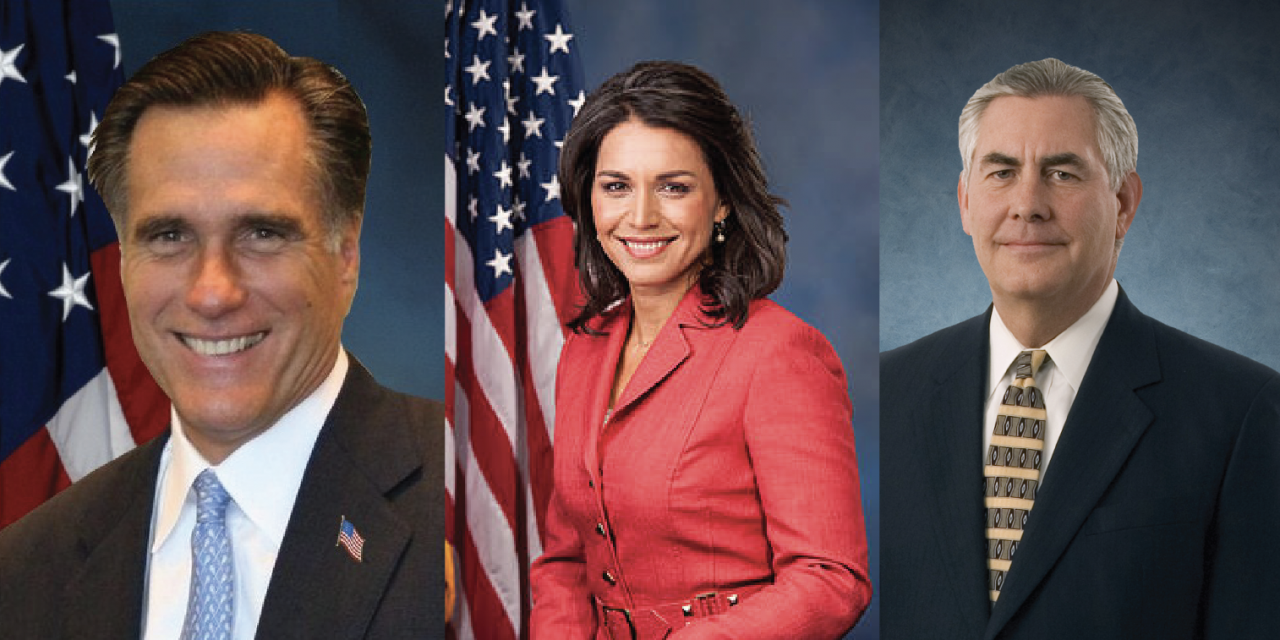 While President-elect Trump’s rumored picks for secretary of state have included 2012 Republican nominee Mitt Romney and Exxon Mobil CEO Rex Tillerson, there is one obvious choice that stands out from the rest: Tulsi Gabbard.

Congresswoman Gabbard is a Democrat from Hawaii who has made headlines over the last year for everything from standing up to the DNC, to calling out the hypocrisy of U.S. Foreign Policy.

There are a few reasons why, if Trump is truly planning to “drain the swamp,” and bring change to Washington, Gabbard should be his number one pick for secretary of state.

1. Gabbard is a veteran who has served two tours of duty in Iraq with the Hawaii National Guard. Because of her service, she not only understands the hardships our troops face, she is also a vocal critic against regime change and the endless war promoted by our current foreign policy:

“I know firsthand. You know, during my first deployment to Iraq, I served in a medical unit where every single day, I saw the high human cost of war. Coming home, serving in Congress now, we’re dealing with budgets and we’re seeing every day the economic impact of how all of these resources that we as a country have spent in these interventionist wars of regime change have cost our country and our economy and our ability to really invest and nation build here at home.”

2. Gabbard is not afraid of calling out the U.S. government for its failure to hold its “close ally” Saudi Arabia accountable for supporting ideology that fuels terrorist groups like ISIS and al-Qaeda:

“What is the United States doing to hold Saudi Arabia accountable for being the number one promoter of Radical Islamic Extremism—not only in their own country, but around the world? Spending hundreds of billions of dollars funding… schools and books and media outreach to try to influence people towards this ideology that’s fueling ISIS, fueling al-Qaeda.”

3. Gabbard has respect for both foreign and local lands, and she has been a vocal critic of the Dakota Access Pipeline:

“The impact of the Dakota Access Pipeline is clear. Energy Transfer Partners, the company that is constructing the Dakota Pipeline, has a history of serious pipeline explosions, which have caused injury, death and significant property damage in the past decade. The future operator of the planned pipeline, Sunoco Logistics, has had over 200 environmentally damaging oil spills in the last six years alone—more than any of its competitors.”

4. Gabbard recently introduced the Stop Arming Terrorists Act, which as its name implies, seeks to prevent the U.S. government from using taxpayer dollars to fund “moderate rebels,” in an attempt to overthrow foreign governments:

“Under U.S. law, it is illegal for you, or me, or any American to provide any type of assistance to al-Qaeda, ISIS or other terrorist groups. If we broke this law, we’d be thrown in jail. Yet the U.S. government has been violating this law for years—directly and indirectly supporting allies and partners of groups like al-Qaeda and ISIS with money, weapons, intelligence and other support in their fight to overthrow the Syrian government … We must stop this madness. We must stop arming terrorists. I am introducing the Stop Arming Terrorists Act today to prohibit taxpayer dollars from being used to support terrorists.”

While Gabbard did meet with Trump in Washington last week, she claimed that the meeting was only to talk about her bill and the future of U.S. foreign policy.

With several of Trump’s cabinet picks raising serious questions about their likelihood to help “drain the swamp,” it does make you wonder why Trump wouldn’t stay true to the views he claims to have by choosing an anti-interventionist veteran like Gabbard to be his secretary of state.