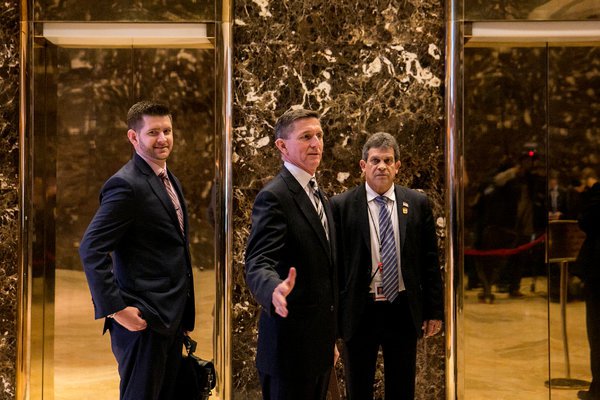 President-elect Donald Trump has fired his National Security advisor’s son, Michael Flynn Jr., after he posted a message on Twitter encouraging further investigation into PizzaGate following the alleged attack on the pizzeria involved in the scandal.

Until #Pizzagate proven to be false, it'll remain a story. The left seems to forget #PodestaEmails and the many "coincidences" tied to it. https://t.co/8HA9y30Yfp

Hours after the suspiciously timed attack on the Comet Ping Pong pizzaria, the younger Flynn, 33, went on Twitter to say that until “Pizzagate” was proven false, it remained a story.

.@mike_pence: Gen. Flynn's son has no involvement in the transition whatsoever https://t.co/Te7XpUfxxg

The mainstream media has been refusing to report key details of the PizzaGate story and ignoring the fact that there are a number of disturbing images that are on Comet Ping Pong pizzaeria owner James Alefantis’s Instagram. Calling this restaurant a “kid friendly pizzeria” with murals like this on the wall showing a woman holding a decapitated head and writing on the bathroom wall saying “shut up and f*ck” – yeah real kid friendly! 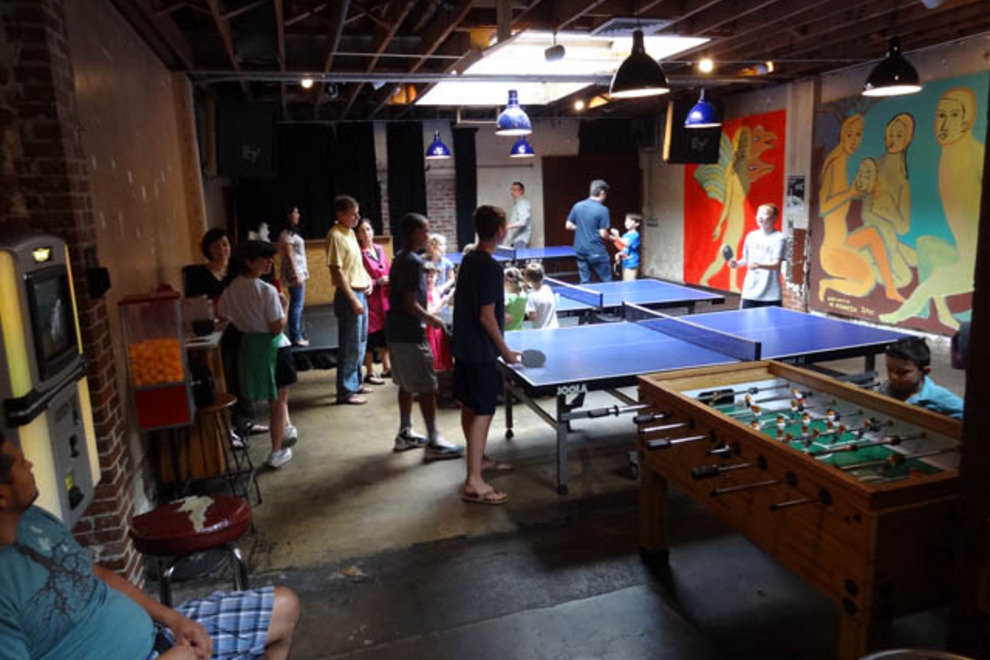 So while the mainstream media takes a press release and repeats the same words over and over again on a teleprompter as exposed in this video, I’ll actually go through what civilian investigators are investigating globally known as “Pizzagate” to the best of my knowledge.

The name “Pizzagate” wasn’t coined because of Hillary Clinton or John Podesta’s alleged involvement and just the blatant use of email code words. It was coined because of the FBI’s own report on pedophile symbols available on SlideShare, a division of LinkedIn. and available on Wikileaks site. Because the businesses in this area of DC all shared a similar pattern with these symbols.  Either this combined with the disturbing images on Alefantis’s Instagram and hashtags like #Hotard, #ChickenLovers etc. and then add in Comet Ping Pong’s own menu says “Play Eat Drink” or coincidentally an acronym for PED with the symbol for child lover are all a large list of coincidences or we may have a modern day pedophile ring operating near the heart of DC. Not so shocking if you know about Operation Flicker and the alleged call boy ring in Washington DC in 1989. 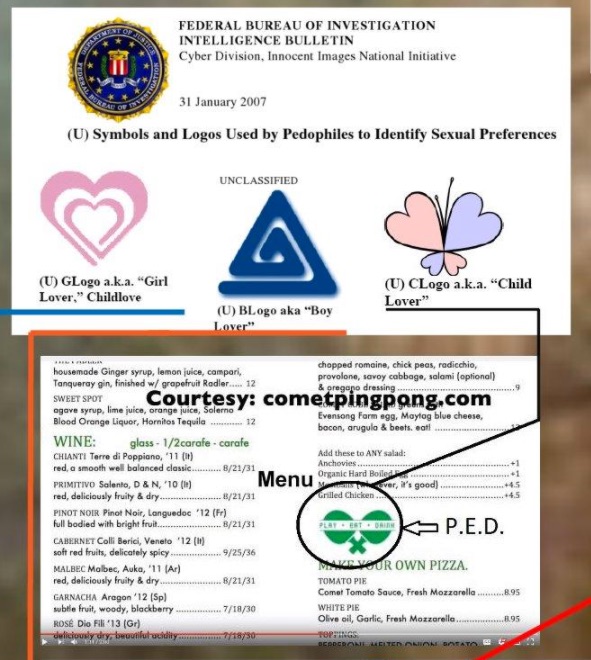 The most disturbing part of all this is that so called “journalists” are largely dismissing “Pizzagate” instead of objectifying this despite all the symbols and several videos inside Comet Ping Pong showing one of the guests of Sasha Lord’s birthday party wearing one of these rings. Additionally, Majestic Ape in the video rant,  jokes about “euthanizing” a newborn baby then there is the pedo joke in which Majestic Ape is speaking about Jarred Fogel and an audience member yells out “and little boys” and she/he says “we all have our preferences.”

So for questioning and bringing up suspicion of an official list by the FBI to identify child trafficking and the weird language in the video you are labeled a conspiracy theorist now? This used to be called investigative reporting until 6 networks took over America’s minds and now controls approximately 90% of the media. Subsequently, Americans are now told what to believe and what not to believe, what is okay and not okay and ran a psy-op against Americans for the CIA called “Operation Mockingbird”. It’s no wonder that in 2016 only 6% of the public trust the state run mainstream media.

Why any of these allegations about a pedophile ring are so shocking to anyone is because so called “reporters” have failed to do any real research into the potential possibility of any of this.  Existing allegations of political pedophile rings aren’t anything new. It happened during the Franklin Boys Town scandal in the 1980’s which was covered up as detailed in the Conspiracy Of Silence and before that there was a documentary aired called “Boys for Sale” which documented several other cases where boys foster homes, book stores, arcades, and the Boy Scouts were used to pick up and traffick children by politically influenced powerful people. More recently you have the case against Jerry Sandusky, which was alleged to have been more than just one person than Coach Sandusky but rather a large pedophile ring. Again, as we have documented over and over another investigator this time the prosecutor Ray Gricar was deemed dead in the Sandusky case after he went missing. Then there are the recent cases busted in Canada and Norway involving high society people.

So for Flynn Jr. to be fired for expressing his opinion saying “that this isn’t over until it’s proven fake” is utterly and abhorrently deplorable. That someone who wants an investigation into something so incredibly dark –  so macabre – to disprove it or prove it and rescue potential children involved is disgusting.

Personally, I am inclined to believe that Comet Ping Pong doesn’t have a dungeon with children in it and rather may have or be a potential private meeting place for elitist pedophiles during private parties like the Sasha Lord birthday party where someone wearing the ring is classified as “little boy lover”-  but that is pure speculation.

Then if you go back to alleged book store involvement during the 1980’s of pedophilia you can see why the symbol above the book store Politics & Prose is worrying. Right out front on its sign is the “Little Boy Lover” logo written into the (&) symbol in the middle of the title. Additionally, in front of Politics & Prose is the skull and bones symbol on the sidewalk which this leaked video inside the court yard of Yales infamous secret society Skull and Bones hosted in a windowless building called “the tomb” by ABC should shock you just a bit.

Is there any smoking gun evidence of such allegations against any individuals on this DC strip? No, but these symbols can’t be ignored. After all, they are official symbols the FBI told the public to look out for and report. These places absolutely need to be investigated and by firing Flynn Jr. for tweeting out “the investigation isn’t over until all these questions are answered” that doesn’t sound like President-elect Donald Trump intends to investigate these concerns right outside his new place of residence – the White House.

DISCLAIMER: This is very important. Please do not harass suspected individuals or businesses. Let the NYPD, the FBI and other legitimate law enforcement agencies do their work. We do have a legal system in this country and everyone is innocent until proven guilty. The FBI are aware of this as you can verify with this video. 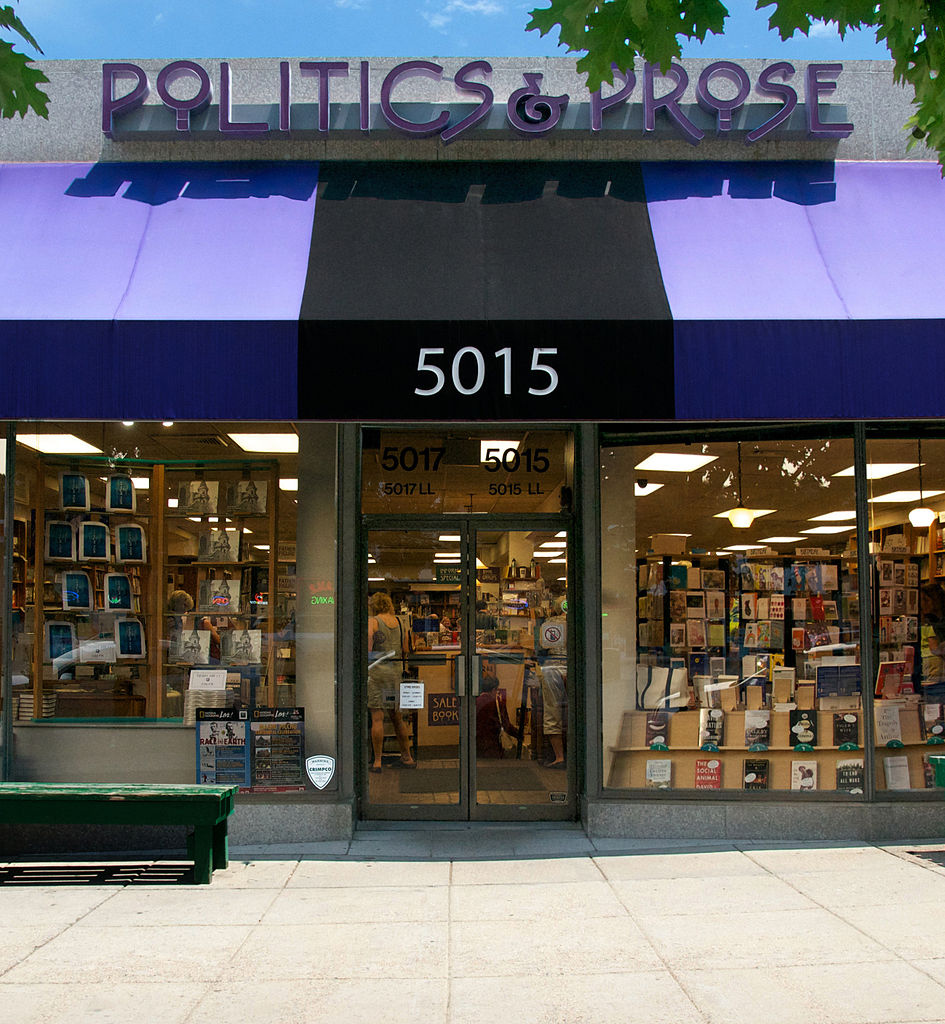 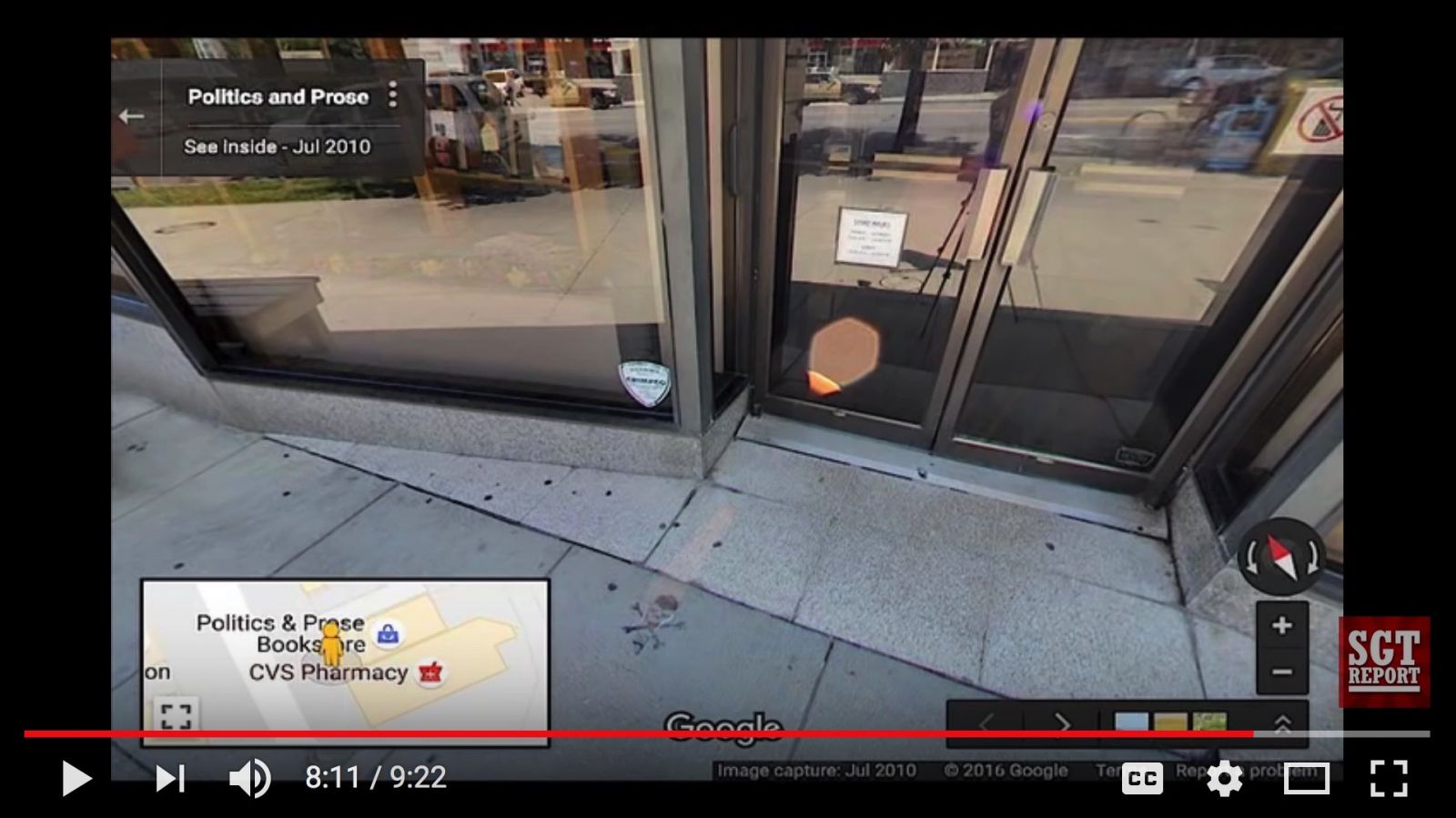