Trump Is Mobilizing The U.S. Military To Vaccinate America

Before I get into what exactly Donald Trump said, click on the video above and watch the very beginning

Where I play for you a clip of the mayor of Chicago talking about selecting city officials who pledge allegiance to the new world order.

Yes seriously. And this is the same mayor who is going and getting a haircut while locking down Chicago.

But as for Trump, you Q followers may not like to hear this…

Trump talks about mobilizing the military and “other forces” to give the vaccine to a lot of people very rapidly.

In the video above I play the whole quote so it doesn’t get taken out of context.

What do you think about what Trump’s saying? Personally I think this is very concerning and there needs to be pushback.

I also cover how Trump’s saying a vaccine will be ready this year, even though many experts doubt that.

Also I explain why you should be skeptical of vaccines and a vaccine for this virus. Some important points to consider are that this virus comes from a group of viruses that we don’t have an effective vaccine for.

We don’t have proper data, so we don’t really know what we’re dealing with.

And there has not been proper testing… But might there be soon? That’s something else I address in this video along with new studies possibly indicating what treatments and nutrients might be working.

When it comes to problems…

The government’s solution is usually worse than the problem itself.

Which is something we’re seeing play out right now.

Making for a good time to reveal our new shirt.

But a very important message.

“IF YOU TRUST THE GOVERNMENT, YOU DON’T KNOW HISTORY.”

Get your shirt now and take a stand against tyranny. 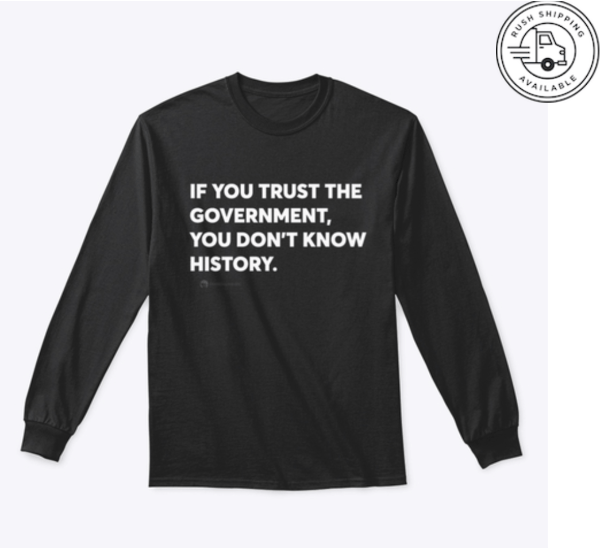