What Trump Does Not Want You To Know About His U.N Speech 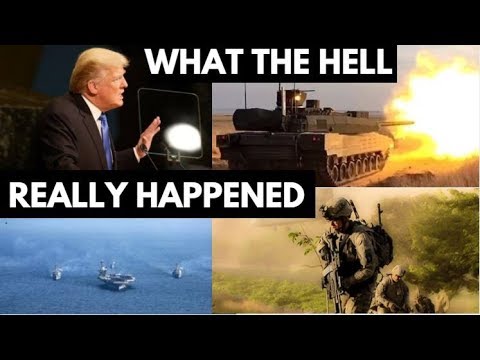 Welcome back beautiful and amazing human beings. I just went through a major earthquake here in Acapulco Mexico that occurred near Mexico City. The shock waves shook this entire house and pretty much scared the crap out of me and everyone else here. It looks like everyone’s fine here in Acapulco.

The show must go on. There’s a lot of incredibly important developments that we are going to get into in this video. Including the latest news with Venezuela, Syria, Iran, Israel, and Russia. As well as the United States where there are some missing CIA files. We give you the latest update on the tyranny from not only the banksters but also our favorite monopoly intelligence agencies. Those same institutions that backed Google.

I hate to tell you “I told you so” but, “I told you so.” A few days ago not only on my Twitter account and YouTube I warned you about the consequences of Venezuela’s latest move. Their decision to stop accepting US dollars for oil payments. They are moving towards the dropping the U.S. Petrodollar.

In response a few days ago I said, “I would expect the regime change in Venezuela soon because of this move.” This, of course, was very easy to predict if you understand American foreign policy. 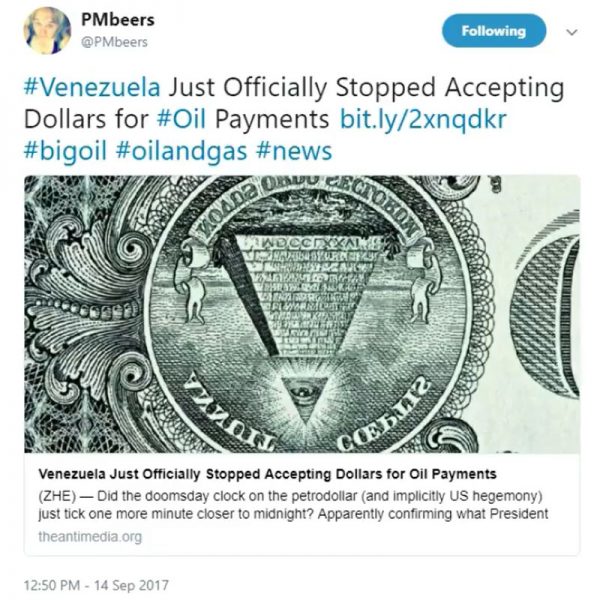 The concept of the US petrodollar hegemony and Donald Trump has now stated that the US is ready to intervene in Venezuela. Trump made extreme statements today saying that he is preparing to take future action in Venezuela. He ultimately threatened that country because as he said they’re delivering only anguish and failure to their people. Donald Trump wants a “full restoration of democracy.” Hmmm. Restoration of democracy and freedom where have I heard that before?

Do you see the propaganda that’s being used against you to sell more intervention to overthrow governments and bring about more war? There’s a reason myself and other experts can predict regime change. I don’t have a magic 8-Ball but I know how American foreign policy works and that’s why they’re selling you on these lies. You don’t see Donald Trump on the stage of the United Nations talking about the suffering of the people in Saudi Arabia, Yemen or countless other countries. He is doing this for greater geopolitical goals and is lying to you about it. If you understood it, you wouldn’t be for intervention or possible conflict. We will keep a close eye on that story and any developments. 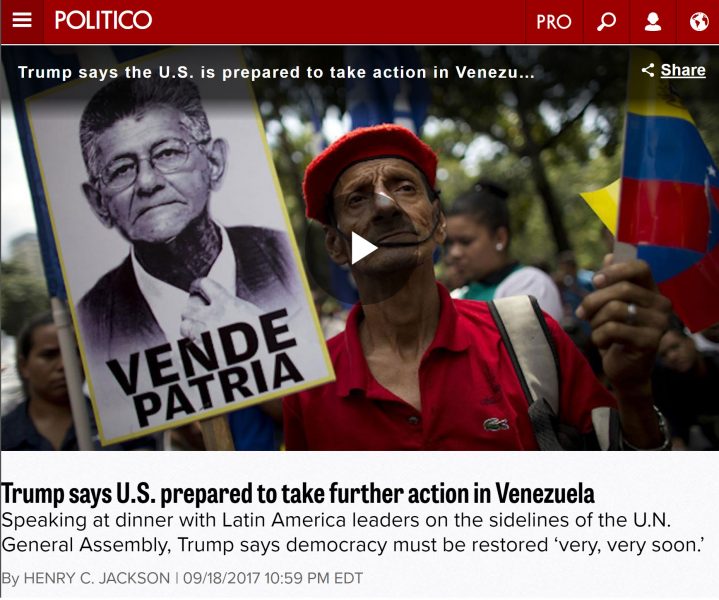 Venezuela was not the only target for Donald Trump at the United Nations today. Trump came off like John McCain 2.0 where he went after other countries like Iran and North Korea. He also discussed those pesky terrorists that the United States keeps creating and that Trump said he would stop arming. He is still secretly doing so through the Pentagon.

He is still talking about how America comes first even though we are over twenty trillion in debt. All while we continue to fund terrorists around the world at U.S. Tax Dollar expense. This makes my head spin. These people lie through their teeth and have ultimate screwed all of us and our future. We will be indebted to the war machine.

Israeli Prime Minister Benjamin Netanyahu congratulated Donald Trump on his speech. He and said, “That in over his 30 years and experience with United Nations he has never heard a bolder and more courageous speech.” Which of course works perfectly for the greater political goals of the unholy alliance of Israel, Saudi Arabia, and the United States.

Israel just fired a US Patriot missile that is worth a million dollars at a drone that was allegedly flown by Hezbollah. While all of this is happening the situation in Syria is becoming more chaotic and unpredictable.

In Syria, there is a proxy war between Russia, China, Iran versus Israel, Saudi Arabia, and the United States. This proxy war is happening now and has been for months. 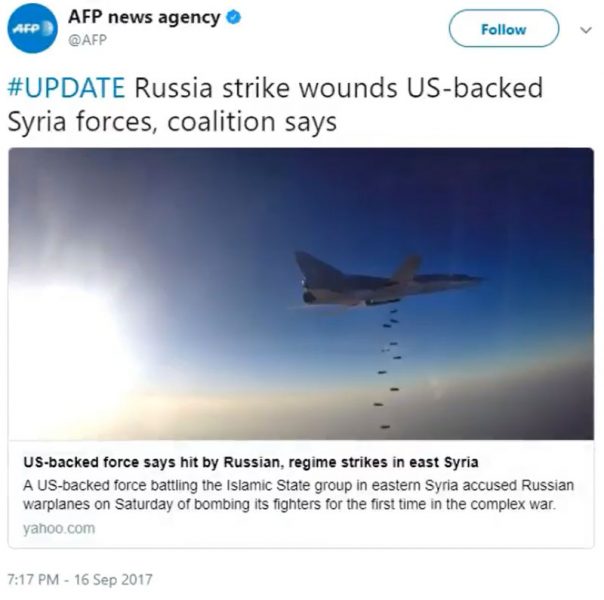 It’s escalating to very dangerous proportions as we saw a couple of days ago where the Russian Air Force attacked U.S. backed Syrian rebels. An estimated 900 U.S. troops are embedded with the Syrian opposition forces. 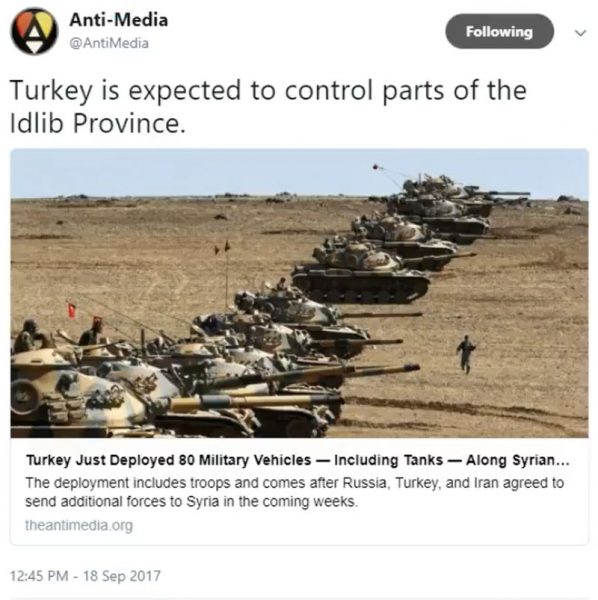 The Syrian Army is making progress taking back their country along with the Russian Air Force assisting them. However, they are indirectly coming into a conflict with American forces.

Just days ago we saw the Israeli military attack Syrian government forces. Now they are setting up large military drills. The most important in the last 20 years establishing their forces on the Syrian border. This is happening right now. It’s not just them but also Turkey who wants a piece of the pie. Turkey just deployed over 80 military vehicles including tanks and soldiers on very strategic pieces of land. Land that Turkey wants to control. It’s important to note as we recently reported that Turkey a NATO Ally has flip-flopped by cooperating with Russia on the future of Syria.

We see Israel strategically support an independent Kurdistan State. They have officially backed their independence along with the United States. This has the potential to Balkanize Syria. Divide and conquer and take more land from Bashar al-Assad. It would create a separate state in the region and help Israel along with the United States and Saudi Arabia battle the Iranian influence.

This is why NATO has flip-flopped and is now cooperating with the Kurds because they have had a long history of disputes with the Turkish government. With Israel and the United States supporting the Kurds. Turkey has therefore pivoted towards Russia in this proxy war. This is just part of this very confusing battleground that we are seeing with all of these countries and world powers trying to get more control over the Syrian region. A country which is a very oil-rich.

We’re seeing Turkey wanting a piece of Syria along with Israel wanting the Golan Heights. We’re seeing them supporting another state outside of Syria, and all of this as Russia and China are backing the Syrian government. While the United States along with Saudi Arabia and Israel support the rebel groups in that region that are fighting alongside radical Islamic terrorists. They hope to Balkanize that region to create more conflict and further war. We have seen escalating throughout the years. That’s a very confusing situation, but I hope I simplified it for you.

It’s not just the Middle East we have to worry about as we’re finding out that the United States is sending yet another aircraft carrier to the Korean Peninsula. This will create more tensions with the Chinese. It’s clear that President Donald Trump’s agenda and his foreign policy are not America first and more people are becoming disenfranchised. It’s a continuation of the same policies of George W. Bush and Barack Obama.

It’s even reaching a bigger level since he is increasing military spending and becoming what he swore he would never do. He has become a “John McCain Lite” since his talking points today are almost identical to that of John McCain. It’s not just happening with the war machine it’s also happening with domestic policy. Particularly those policies of the big Banks. Ann Coulter even said that Bush only had three Goldman Sachs people, but Donald Trump has six. 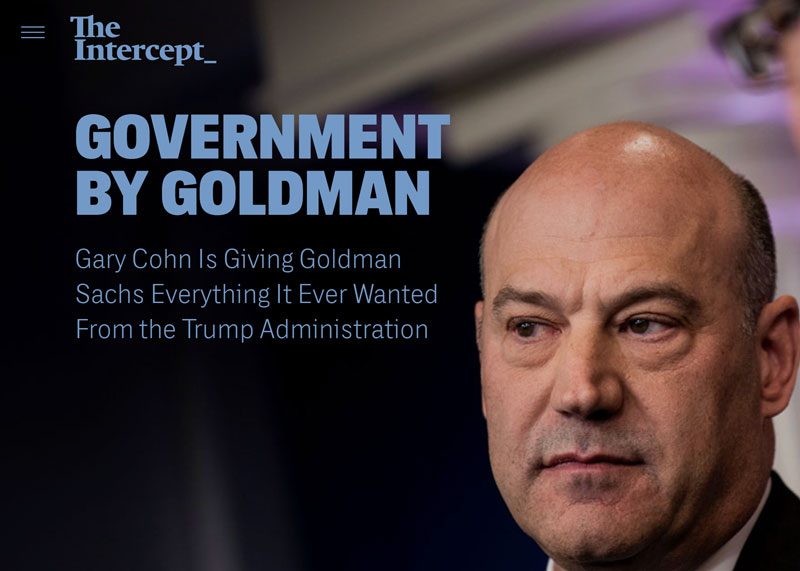 Those same Goldman Sachs officials that Donald Trump rallied against when he was running to be president of this country. He is now giving them whatever they want while the middle class of this country is destroyed and the average person is being programmed to hate each other. They never look at the bigger financial crimes that are happening in this country. Crimes that are robbing the wealth away from us. They are indebting our children. Here is a really great comprehensive article by The Intercept that I recommend you should review.

In other banksters related news, we have JPMorgan and Chase who came out calling Bitcoin a fraud but yet these companies still handle Bitcoin-related trades. Demonstrating the ultimate hypocrisy and manipulative frauds they are. They, of course, have no moral or ethical background which shouldn’t be a surprise to you.

In totally unrelated news we have WikiLeaks coming out today and publishing details on the Russians governments increasingly repressive internet surveillance industry. They have exposed how the Russian government spy on their own citizens. Including very important files that you can find here. 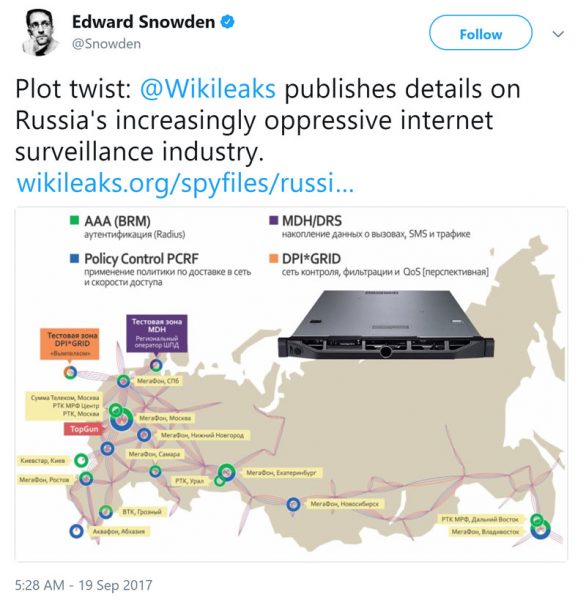 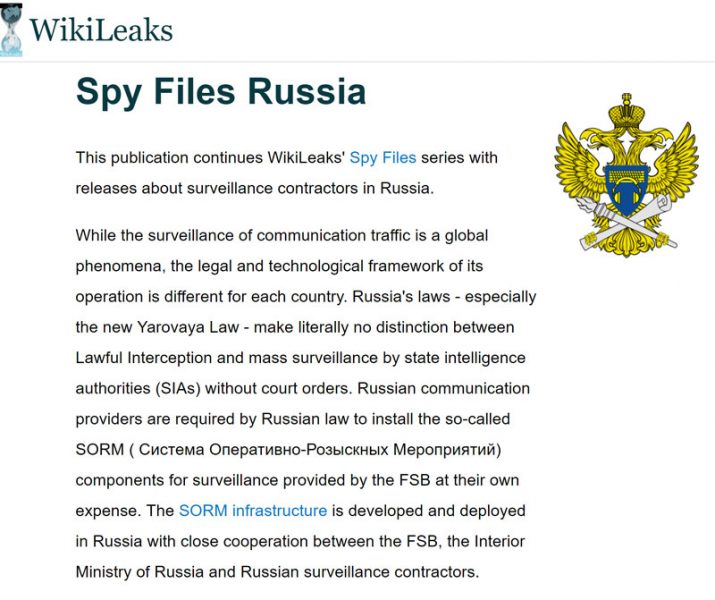 In other horrible tech news, Google is intensifying its censorship of left-leaning websites those predominately anti-war. While at the same time they’re also hiring a thousand journalists to flood newsrooms all around America. This shows just how effective real independent media is having. Especially after the latest public relations debacles that Google went through. Whether Google is firing their employees or censoring search results and websites, they have been getting a lot of bad press. They are ramping up their media presence by sending over a thousand Google hired journalists to local newsrooms all around the country. 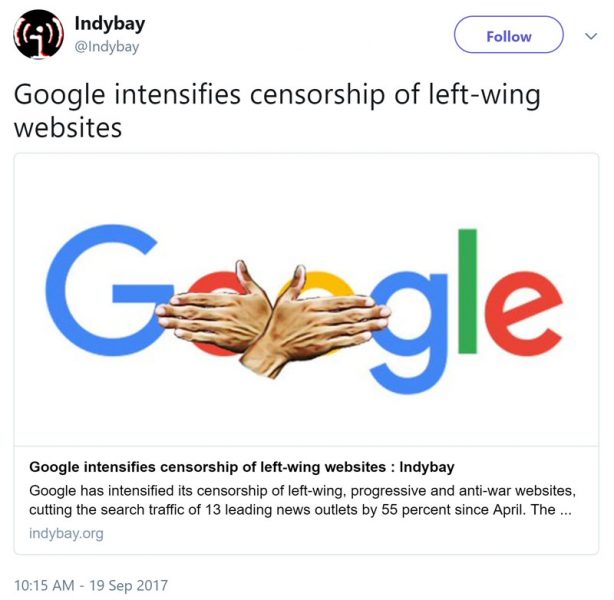 Real news and information are vital. It is the number one asset to any company or government. If they lose control of the narrative, then people will find out about their lies and sinister deeds. They’re worried their entire Empire will crumble. It is entirely dependent on people using them and trusting them. This is the reason why we’re seeing a journalistic offensive by Google right now because in this day and age information is the strongest weapon out there.

This week we’re finding out that an entire volume of CIA files on Lee Harvey Oswald that were supposed to be released days from now has gone missing. If you don’t know who Lee Harvey Oswald was he was the patsy, sorry, I meant the alleged mastermind and murderer behind the assassination of U.S. President John F. Kennedy. I’m surprised the government agency has lost more secret files surrounding the highly controversial death of a U.S. president. A death that is surrounded by conspiracy theories and where there are many holes in the official story. It’s very convenient of the CIA to have made such a ‘mistake.’ 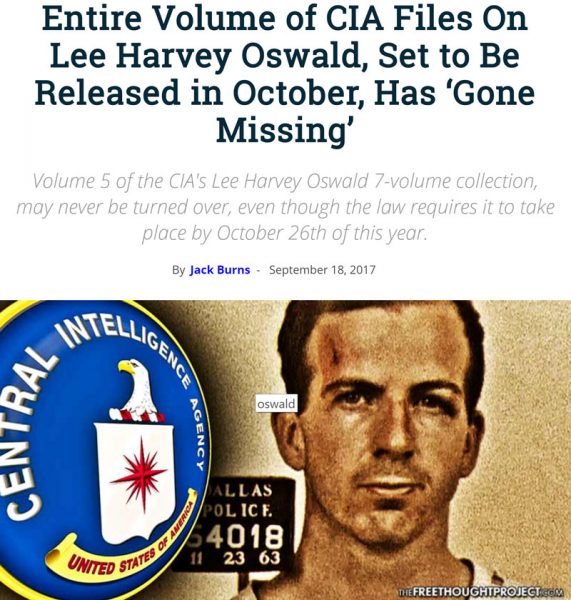 Remember everyone truth is the substance of morality, and this is why there are so many coverups and so many lies. There is much propaganda being used against you, and that’s why we do our best to uncover the truth here on youtube.com/wearechange.

We are an independent media company and would not exist if it wasn’t for your donations and support. I love you guys thank you so much.