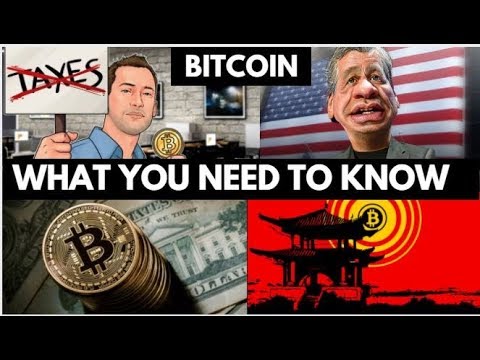 Today I am reporting from Acapulco, Mexico, home of the Anarchast and Anarchapulco. Here with me is Jeff Berwick. There have been so many amazing, incredible developments and exciting Bitcoin news. Whether it’s with Jamie Dimon of JPMorgan and Chase, or the latest news that just developed in China. The fears and concerns of many about our global currency. We’re going to go over all the important developments of course with Jeff Berwick, a leading expert in the Bitcoin community.

Jeff has been on Fox News when anchors were telling the public that Bitcoin is a scam. He was telling people to buy at $35. Now even with the latest happenings in China where they have decided to block not only ICOs but also block exchanges. They want to get information about their user’s bank accounts to tax them. He called this several days before anyone else did. I asked what he thought of these latest developments, in particular with this big price influx that is happening with Bitcoin.

Jeff Berwick:
“You know for Bitcoin is still a fairly small market. It’s a sixty billion dollar market cap if you look at the total value of all the gold that’s ever been mined that’s about seven trillion. So that’s a hundred times more or a thousand times more, I went to public school so I can’t-do the math in my head. I think it’s a hundred times more so Bitcoin is 1/100 the size of the gold market,” Jeff explained “You’re going to see it’s it only started in 2009, so we’re just a few years into it. Most people didn’t even know about Bitcoin in 2015. We’re just a few years into it, so you’re going to see a lot of fluctuations and volatility. One year ago today Bitcoin was $600, and it hit over five thousand dollars just a few weeks ago. It spiked quite high after the fork in August and had doubled in price since then. For it to pull back to around three thousand was expected, and I said it was going to. Then to have a bounce back now and it’s back up around four thousand again. This is very normal nascent currency that is evolving.”

Luke Rudkowski:
I then asked Jeff if he has concerns, when it comes to the bigger kind of bankers and the corporations, putting their hands on Bitcoin which was usually more diversified.

“I have no concerns whatsoever. They can’t-do anything to take control of Bitcoin, they can’t stop it, they can’t censor it, no government can. Bitcoin doesn’t exist anywhere; it’s the honey badger of money. China can say ‘oh it’s illegal’ and Bitcoin doesn’t care. I don’t have any major concerns about any of those groups, Google, or any of them. In fact, I have no major problem with a lot of companies who want to track me personally. I don’t have a major problem if what they’re doing is trying to find out what I like to buy and all that kind of stuff. It’s like great then I’ll get better ads. The big problem is when those companies like Google and Facebook are working with the government, with the CIA and the NSA, to track you so that they can tax you and extort you and put you in cages, which is all that government does. That’s where I’ve got a big problem.

We’ve got to get rid of governments and central banks off of this earth, and I think bitcoin is one way that we can do it. A lot of people out there as you pointed out might say ‘Well what if the globalists want this to come out as the currency.’ They do not that is because of the big benefits to them of central banks. They control the currency; they can give it to any other friends that they want. Governments can also inflate it as much as they want. That’s why most governments today still exist, unfortunately. It’s how they can have all these wars is because they can inflate the currency. It’s an extra tax on people but you can’t-do that with Bitcoin they can’t control it. They can’t just give it out to their friends unless they have already bought it and they can’t inflate it. So there’s no chance, there’s a zero percent chance, the globalists want Bitcoin to succeed, and you can just look at everything that’s going on in the world today, and you can see that happening.

Here is an example since you brought up Jamie Demon I call him of JPMorgan. He came out and said Bitcoin is a fraud. Three days later it was shown that JPMorgan was buying up a ton of Bitcoin in the marketplace. So he was saying that to get the Bitcoin price down. I think they’re buying it because they’re realizing they can’t stop and that it’s going to be huge. It’s going to go up in value tremendously, and they’re trying to figure out how they can take advantage of it or how they can control it, but the real deal is they can’t.”

Luke Rudkowski:
My next question for Jeff was his thoughts on the supposed danger, which central banks and larger corporations pose, the idea of them buying up Bitcoin in mass then manipulating its value.

Jeff Berwick:
“There isn’t as long as because Bitcoin continues the way it has been. You could have a minor takeover of Bitcoin. What would happen in that situation is, if all the central bank’s got together and all the government’s, they said ‘Okay we need to take over Bitcoin,’ and they said okay let’s print up like 10 trillion dollars, of useless fiat currency and buy every Bitcoin. All they would accomplish is to raise Bitcoin up to something like a million dollars a Bitcoin. I would be incredibly wealthy overnight and so would many other people. Then we just would just say ‘Okay let’s not use Bitcoin anymore because somebody controls it. Let’s use one of the thousands of other cryptocurrencies,’ which you can’t even track. This is the end game, and they don’t realize that. Well, they will realize it if they listen to me, but this is the end game. We’re going to take down governments and central banks with cryptocurrencies, and there’s nothing they can do about it. Yeah, it’s beautiful.”

Luke Rudkowski
My next question for Jeff was about the thousands of altcoins out there, like Etherium and Steemit, and how he can tell which are worth investing in and which are not.

Jeff Berwick:
“Yeah, there are thousands out now. I get contacted by several of them a day right now. It’s just like when the internet first started and when automobiles first came out.
There were a thousand car companies at the beginning then it got down to just a few, and now half of them are owned by the government that sort of thing. That’s what happens in every nascent industry, even the internet. There were thousands of companies, and it all got down to a few. Now we have Google and Facebook and all that kind of stuff. We’re going to see that with the cryptocurrencies. The thing with cryptocurrencies, is there are much more value and many more things that currencies can do than just being money itself. You brought up steam, that’s a social media network that’s backed by a cryptocurrency as you pointed out. There are all kinds of developments coming out of decentralized platforms that are going to be built on things like Etherium or maybe the new one by Dan Larimer, EOS. That’s is going to re-establish what the internet is, so we’re going to decentralize the internet again that they are trying to centralize. It’s all through things like cryptocurrencies. It’s fantastic. For people haven’t been paying attention you need to.

It’s like being around when the internet in 1994-1995, it’s happening all over again. I was there for the beginning of the internet, so I see it all happening again. There are so many currencies, and it just comes down to what is in development, what are they trying to develop technologically, and is it viable. Who is trying to improve it, it always comes down to people as well. Do they have a good track record? The same things you would look at with a regular business is how you have to look at every cryptocurrency. Like I said there are thousands out there so you can’t look at them all by any means but people should be checking them out because they’re here to change the world.

There’s nothing governments can do to stop it. It’s so fun to watch them just scurry around like cockroaches trying to figure out what they’re going to do and there is not much they can do.”

Luke Rudkowski:
I’m very curious about the thought of AI breaking encryption with Amazon and Google and Facebook working on artificial intelligence far superior to human intelligence. I asked Jeff if he sees that as a possible threat in the future.

Jeff Berwick:
“Not as much as a lot of people do. One example, when you go online today, and you go to a website, it says ‘click here to say you’re not a robot’ or just ‘pick out a street sign from this photo.’ If A.I. hasn’t even developed to the point where it can defeat that, then I think it’s overblown. I believe that these guys do it on purpose. I believe that people like Elon Musk are giant corporate whores since he gets all his money from the government. Most of the stuff he does is just total BS. These guys sell this stuff to scare us. They want us to believe that they are in control of everything, that they own everything, and because I control everything they can just watch everything we do. That’s what they want. They really can’t; they just don’t have that kind of computing power. So I’m not that worried about A.I. or robots killing us. We’re not even close to that right now. I’ve seen those sex robots I’m pretty sure I’m going to stick with real girls for quite a while. Over time these things can develop quickly, we will see what happens. Who knows, sometimes technology has exponential growth. We could see in 10 or 20 years from now something like we would never even imagine. That is possible, but I don’t worry about it too much.

At the end of the day, if you got some green trees, you got some good fruit, you got a cute girl or girlfriend or wife that’s all you need. People worry too much. The only problems in the world today are the problems of governments and central banks. We’re getting rid of them just by out developing them on this technology.”

Luke Rudkowski:
I asked if Jeff any last final words about where people could find him or anything else he wants to add.

Jeff Berwick:
“You can find me at dollarvigilante.com, and I am on YouTube every day with new videos, just check out The Dollar Vigilante. If you want to learn more about cryptocurrencies I’ve put together a free video webinar that you can get access for free. It’s at dollarvigilante.com/bank. If you want to and you accept our offer, I will send you your first 50 dollars in Bitcoin directly from me so you can check that out.”

Luke Rudkowski:
I want to give a very special thank you to Jeff we appreciate the amazing work he has been doing. I would also like to say thank you amazing, incredible audience that’s been subscribing and staying tuned.