Trump Is Quickly Losing His Supporters Since Attacking The Syrian Government 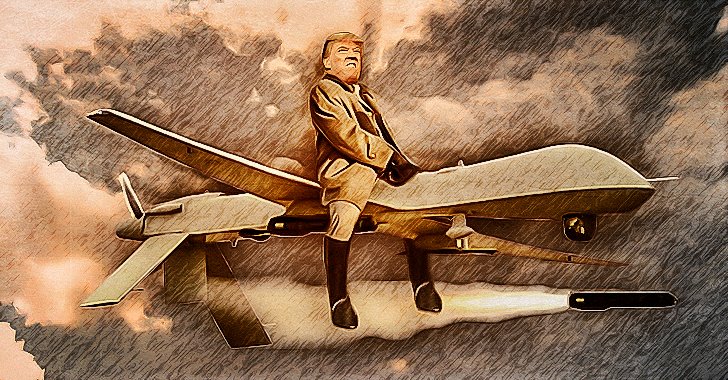 Although it is widely speculated that one of Trump’s aims in striking Syria was to garner further domestic public support for a political career off to a horrendous start, the result may, in fact, cost him a significant portion of his original support base. While Democrats and the media have rushed to praise — or at least failed to condemn — the president’s decision to launch yet another illegal strike on a sovereign nation, many of his original supporters have begun to express their dissatisfaction with the American president.

A good example of this can be seen with one of Trump’s stalwart allies, United Kingdom Independent Party (UKIP) leader Nigel Farage. He has sharply criticized Trump for his decision to bomb Syria.

“I think a lot of Trump voters will be waking up this morning and scratching their heads and saying ‘where will it all end?’” Farage stated, before adding, “As a firm Trump supporter, I say, yes, the pictures were horrible, but I’m surprised. Whatever Assad’s sins, he is secular.”

According to the Telegraph, Farage is only one of many far-right Trump supporters who has expressed their distaste for Trump’s decision to strike the Assad government. The others include Milo Yiannopolous, Katie Hopkins, right-wing vlogger Paul Joseph Watson, Ann Coulter, and others from within the UKIP circle.

“If [Donald Trump] started a war with Russia and Syria because of an emotional reaction, then he’s not fit to have the nuclear codes.”

“Hard to argue with this,” Watson captioned the retweet.

“Guys, I can’t vehemently oppose destabilizing the Syrian government for 6 years and then support it just because Trump did it,” he also stated.

Most importantly, Watson said, “I guess Trump wasn’t ‘Putin’s puppet’ after all, he was just another deep state/Neo-Con puppet. I’m officially OFF the Trump train.”

“Trump campaigned on not getting involved in Mideast. Said it always helps our enemies & creates more refugees. Then he saw a picture on TV.” [emphasis added].

These pro-Trump pundits are not alone in their criticism of Trump’s military strike. As one Twitter user stated in response to Trump’s recent assertion that the U.S. should stay out of Syria:

“What I am saying is the same thing, and pretty much everyone else who voted you in.” [emphasis added]. 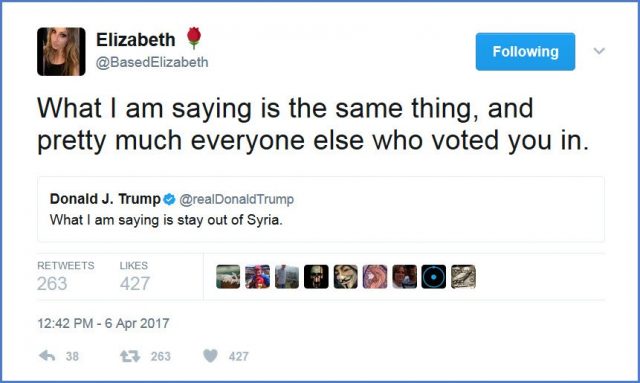 A Trump-supporting war veteran expressed his dissent over the strike, stating:

“From a veteran, we need to stay out of Syria, NOT OUR PROBLEM! I did not vote for you for this! Jobs, Wall, Security.” [emphasis added]

As one alt-right user astutely noted:

“The AltRight is portrayed as bloodthirsty, ignorant and vicious yet every Alt Right person on Twitter right now is campaigning against war.”

It appears many Trump supporters were not necessarily simply out of loyalty to Trump, but also, at least in part, due to a strong distaste for Hillary Clinton’s policies, particularly regarding Russia and Syria. Most surprising, however, is the fact that many of them have stuck to these principles, and Trump’s recent decision to strike Syria has not changed their mindset on the Syrian war and/or Russia. In this context, Trump supporters are actually proving more principled and honest than Obama and Clinton supporters considering many Obama supporters appreciated his anti-Iraq war stance only to stay silent as he bombed seven nations in a six-month period.

Trump may start to unite Democrats and corrupt politicians behind him, but he ultimately may be losing the significant section of his voter base that voted him in as the antithesis to Clinton — not her alter-ego.