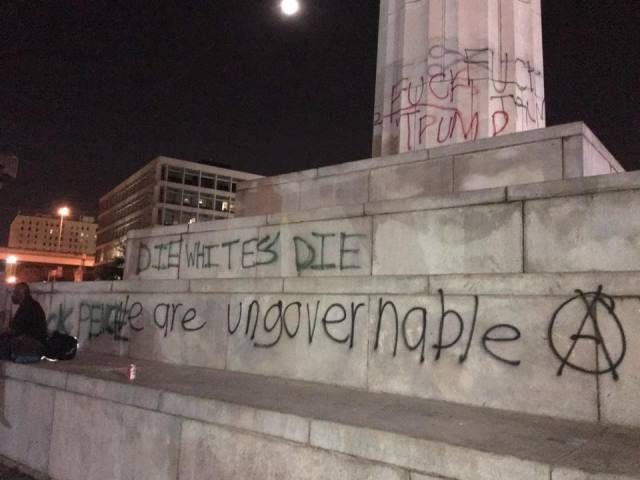 Donald Trump won the election fair and square, but now angry mobs are spreading hate and engaging in violence against his supporters.

On election night outside the White House, mobs of anti-Trump demonstrators continuously targeted and surrounded Trump supporters. Supporters of the president-elect who had went to the White House to celebrate had their American flags stolen and burned. During one of the fights, an anti-Trump protester bit the ear of one of their targets, drawing a large amount of blood.

During the mass anti-Trump temper-tantrums in California, a woman told CNN that there needs to be death over the election outcome.

“If we don’t fight, who is going to fight for us? People had to die for your freedom where we’re at today. We can’t just do rallies, we have to fight back,” a Latina woman named Lily told the station. “There will be casualties on both sides. There will be, because people have to die to make a change in this world,” she continued.

In Louisiana, a famous monument in Lee Circle was vandalized with messages such as “Die Whites Die,” and “f*ck Trump,” during riots over his election.

The vile rhetoric from the left throughout this election is obviously to blame for this wave of violence and extreme hate. The liberal media consistently referring to supporters of the president-elect as “nazis, racists, sexist, bigots” has obviously been taken to heart by their less intelligent viewers. Any blood that is shed is on their hands, as well as those of Hillary Clinton herself, who has referred to Trump supporters as “deplorable” and “irredeemable.”