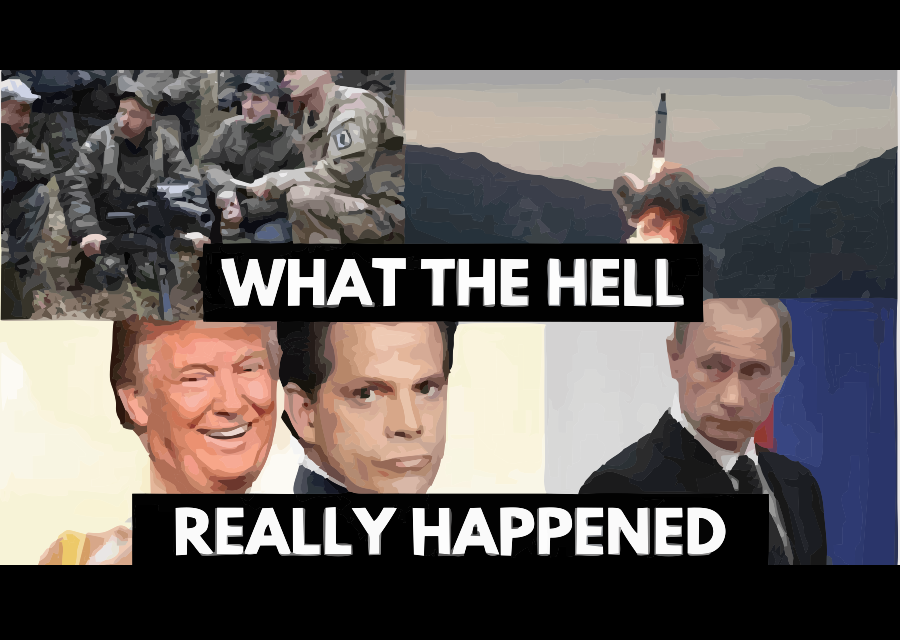 Welcome back you beautiful, amazing human beings! Just a reminder before we begin today; what you’re stressing about right now won’t even matter in a few years. So calm down relax and empower yourself with real information, which we try to provide you here on WeAreChange. In our ‘daily’ videos, which are called “What The Hell Really Happened.” Okay, your right, they’re not daily because I’m really busy. 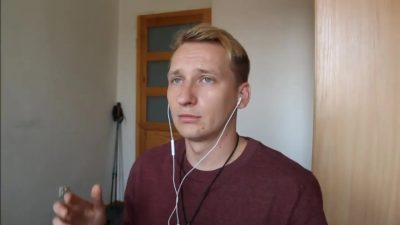 Now that was a little cheesy, so let’s move on with the top news of today August 1, 2017. We will be talking about the very confusing, duplicitous Donald Trump. His recent moves with his cabinet and with his foreign policy. How an evil military-industrial corporation has ties to child trafficking and child sex abuse. How this company is now closer to the White House than ever before. We will also discuss Russia’s latest actions against the United States and the war-hawks that are pushing for war with North Korea.

The first story that I want to talk about is Donald Trump’s controversial move to stop funding the rebel groups inside of Syria that was just made a few days ago. There is new information out showing that Donald Trump was personally impacted from a disturbing video that he saw. That video shows the US funded and CIA backed Syrian rebels beheading and murdering a little child. It is reported that seeing this video made Donald Trump decide to end this very controversial CIA program. 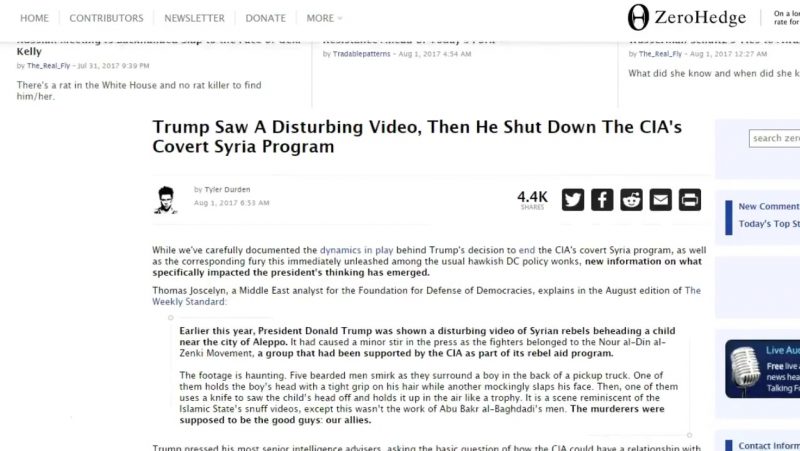 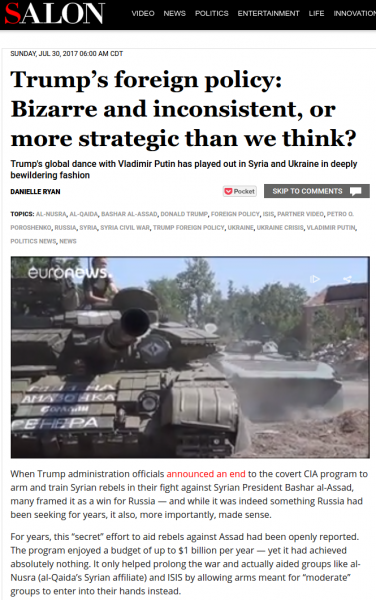 A similar program to ones that the Pentagon itself had, spending five hundred million dollars per year to just train “four or five” fighters inside of Syria. A program in which weapons flowed from these rebels directly into the hands of ISIS and al-Qaeda. 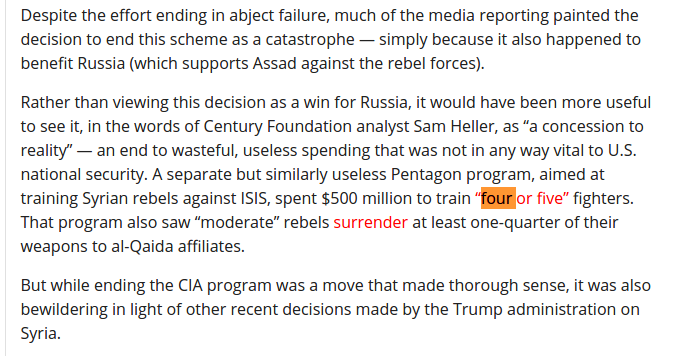 You would think that the program being such an utter disaster in itself would make Donald Trump stop it. Instead, it was a video, which I think is why Donald Trump initially continued this program all the way until June. The story does seem legitimate especially after Ivanka Trump saw videos of Syrian children dying from a supposed chemical attack. Which then sparked Donald Trump to attack the Syrian regime just a few weeks ago. We see a trend here.

It’s important to note that one of the UK’s largest broadcasters Channel Four tried to delete the video of this incident and cover it up after they released it. 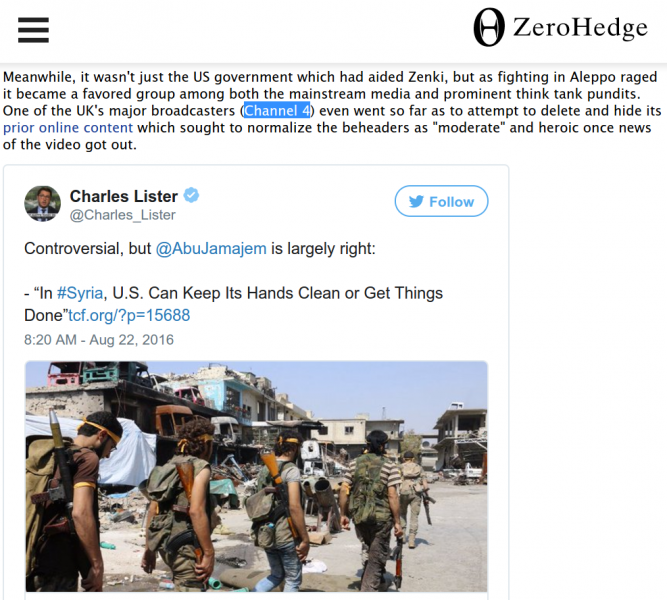 Donald Trump did the right thing here, but it was inevitable that this program would not continue. The fact that he’s acting emotionally because of this and not rationally is troublesome and will lead to future problems for the United States. 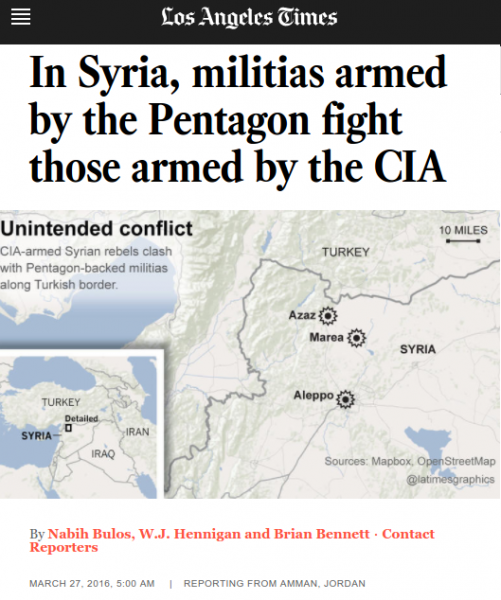 In other future problem news, the Pentagon has plans to arm Ukrainian troops and rebel groups to go after the pro-Russian separatists in Ukraine. 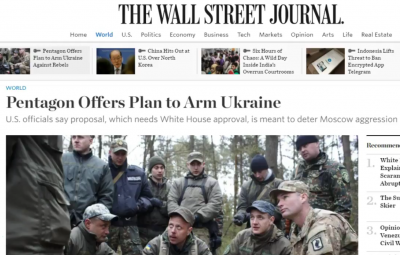 This latest move is only angering Russia even more. The situation is becoming more desperate and intense as we’re learning that Ukrainian separatists on the pro-Russian side in Donetsk are claiming to have created their own country which they are calling “Little Russia.” Which of course has upset the Ukrainians on the pro-European Union and US side. They do not see as it as a legitimate country which will lead to future conflict in the region. 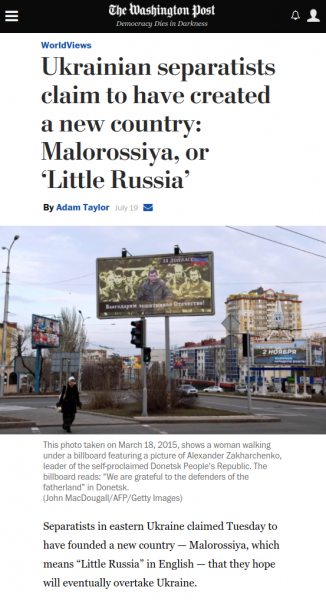 This is not the only test between US and Russian relations. We know Donald Trump has recently stated that Russia has meddled in the elections against him. He now supports sanctions against Russia and Russia has responded with diplomatic moves, which are the harshest since the waning days of the Cold War. Many foreign policy experts are now claiming that we are in a Cold War 2.0 and say that Putin has given up on the White House. These two nuclear-powered countries are now at odds with each other more than ever. 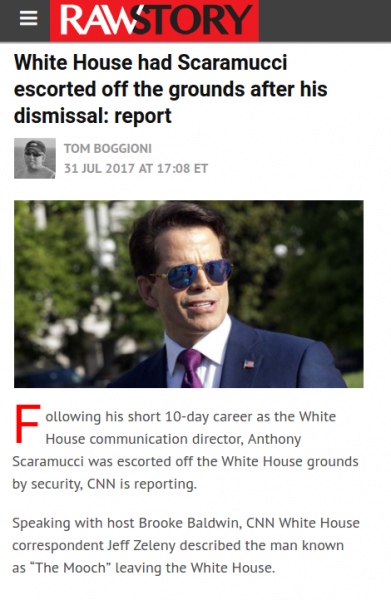 He was reportedly escorted off the grounds; this is not a good look for the Trump administration since it shows a lot of instability inside of the White House. While the mainstream media rejoices at the moment and use the event to go after Donald Trump’s legitimacy, they are not discussing how his new cabinet picks are mainly people from Wall Street and the US military industrial complex. 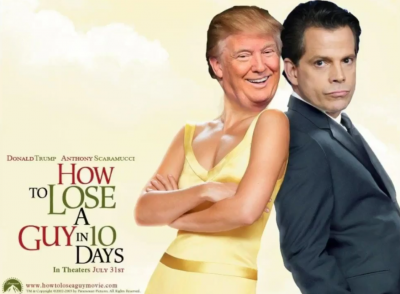 The reasons why the Scaramucci was fired are not known, but he did go off on a tirade to a New Yorker reporter where he said: “I want to <bleeping> kill all the leakers.” He also went on a tirade against Reince Priebus who was also recently fired and replaced with John Kelly by Donald Trump days ago. 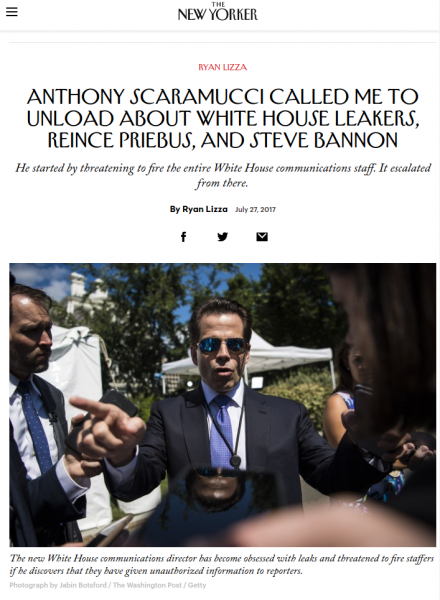 Reportedly it was John Kelly the new White House chief of staff or Donald Trump that decided to fire him. It is clear that John Kelly is trying to impose order at the White House and he has been mainly praised by the mainstream media which automatically brings red flags up for me. 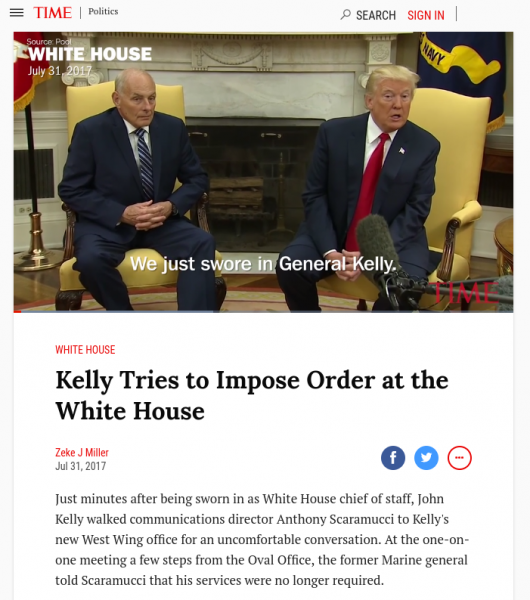 If you look at John Kelly, he’s not only connected with the military through the Department of Homeland Security but also the very controversial military-industrial corporation DynCorp. 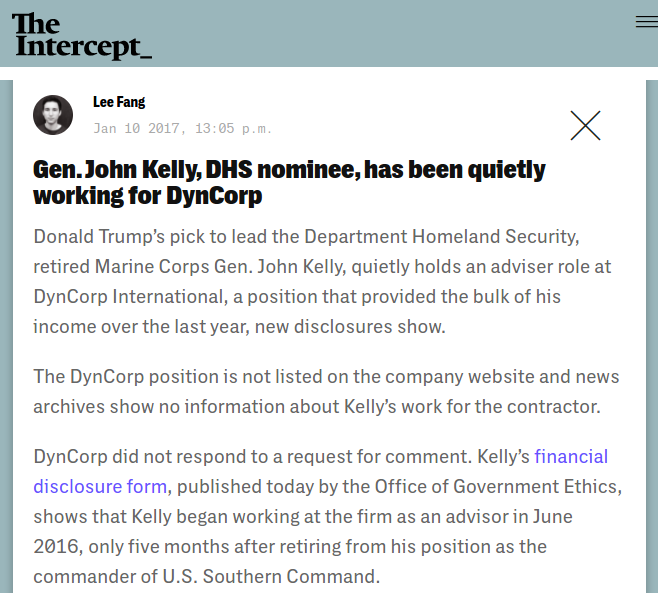 In 2015 John Kelly earned $166,666 from DynCorp as an adviser to this mega government connected corrupt institution. 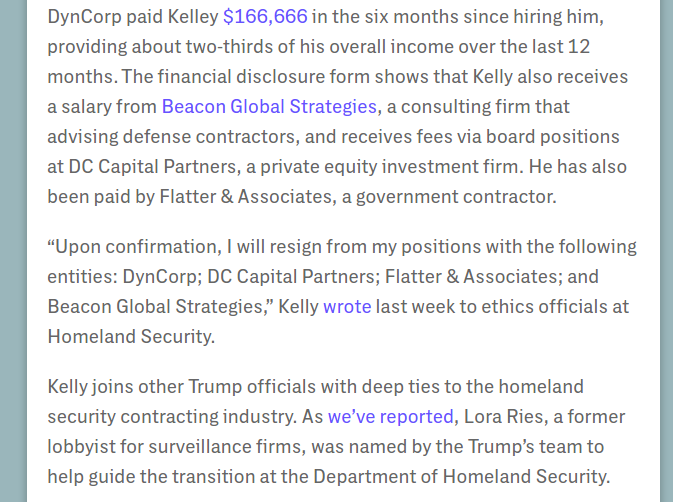 DynCorp amongst other things was caught in Afghanistan hiring dancing boys to entertain tribal leaders and involved in a sex slavery scandal in Bosnia in 1999. DynCorp’s own employees were accused of raping, buying and selling girls as young as 12. These employees never faced any legal consequences.

The scandals and investigations into this corporation are massive and too much to detail now. The fact that Donald Trump’s White House Chief of Staff was recently on their payroll, is an issue that everyone should be concerned about. Neither the mainstream media nor the Pro-Trump alternatives want to bring that up.

Now in further corrupt military-industrial complex news; the United States has wasted over 14 trillion dollars on war within the past three decades. 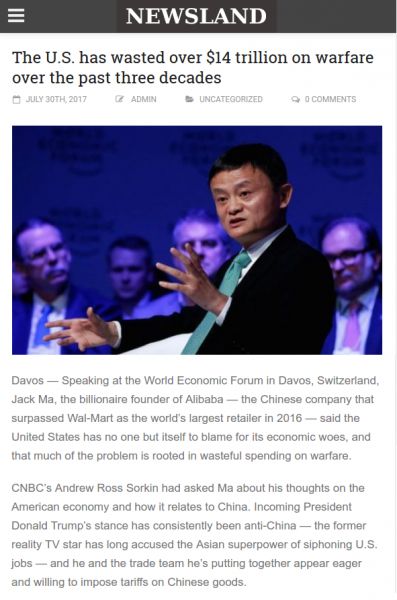 War is a major business; it is not humanitarian work, it is not meant to spread democracy or freedom and liberate people, it is designed to make the rich richer, and that’s exactly what it’s been doing. That is why people push for more war and more conflict.

We see this exemplified with the recent geopolitical moves all around the world. Recently the U.S. fired warning shots at Iranian vessels and are calling for more sanctions on Iran. 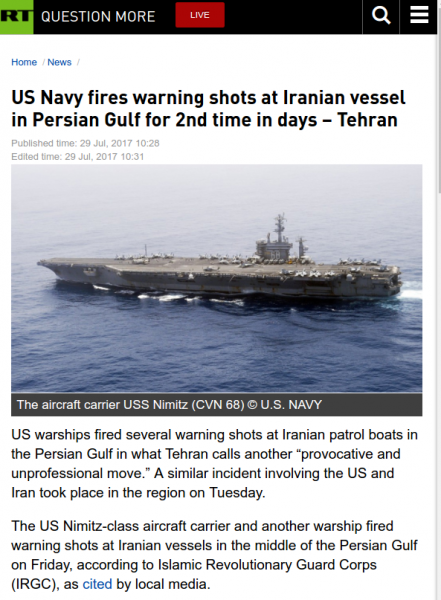 North Korea looks like the most opportunistic place to bomb next as they just carried out “unprecedented tests of their submarine missile systems.” 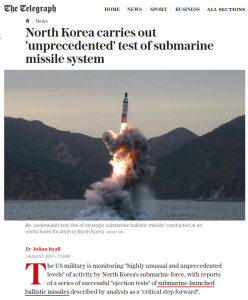 The Pentagon is raising alarms, using it as a justification to expand their military budgets. To increase their troops and their presence inside of South Korea. They are also trying to mobilize the Chinese to allow them the US to take action against North Korea. The Chinese have responded with “we’re not cooperating” which will be a very fascinating geopolitical foreign policy objective that we will see unfold in the next few days. 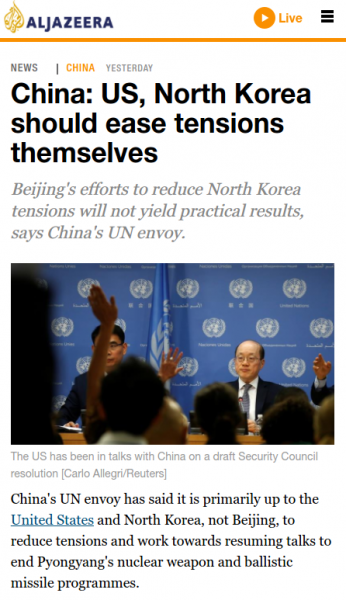 We will cover it all here at WeAreChange. If there are news stories that you thought I missed let me know in the comment section. If you enjoyed this video, please share it. We are not financed by any corporate or government entity. We are only financed by you. If you want to see more videos and articles like this, please support us. There are many ways you can do that and not only just by donating. You can up vote us on  steemit.com/lukewearechange.  Check out steemit.com. It’s great for anyone even if you’re a content creator or just a viewer.

I love you all, thank you for your support.